The Birth of a Nation (May 29th at the Cleveland Cinematheque)

[BIRTH OF A NATION screens Friday May 29th at 7:00 pm at the Cleveland Cinematheque.] 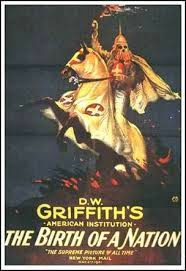 Imagine what sort of childishness and geek-media idiocy will prevail in 2077, when the Civilized World, or what passes for it, celebrates the 100th anniversary of STAR WARS. It's quite possible there may be news coverage of nothing else - except perhaps American race riots, and the last of the government emergency funds used to prop up the corruption-ridden Al Sharpton University. And even those will get minor news time compared to 24-hour streaming of the Great Wookiee and Ewoks Forest Games (the re-branded Olympics) and the hit reality show Boba the Bounty Hunter.

There's a milestone 100-year mark right now in movies, but it's getting very little bandwidth at all. The centennial of the film landmark BIRTH OF A NATION.

No, there were no Jedi or droids in D.W. Griffith's 1915 Civil War epic (okay, half the internet readership fell off right there), but BIRTH OF A NATION was still, in many ways, more accurately the Birth of Cinema itself. Silent-movie pioneer Griffith, who was at work on one- and two-reelers back when things like the closeup and the establishing shot were wild new inventions - put together all the ingredients then known to the embryonic movie business, and even improved on them for his thunderous epic.

Early narrative movies were pretty much plotted out like filmed stage plays, with actors doing their stuff stiffly left-right across a static image area for a stationary camera (you modern kids, think of Pong-era video games). Griffith did a lot to change that and make the movies move. No wonder Charlie Chaplin hailed Griffith as "father of us all."

But Griffith went further, in my humble opinion, by also showing how much movies could @#^&! things up. And this brings us to why, when you’re in a US Post Office now, you’ll find more Batman commemorative stamps than BIRTH OF A NATION ones.


For, after wowing first-generation film audiences with a series of action-spectacles and early Bible epics of escalating ambition for the Biograph Studio, Griffith poured everything he knew (and all the money he had, a spiraling-out-of-control budget of...wait for it...$110,000) into his independent pet project. It would be a historical epic such as none that American audiences had not previously seen, and it scored a huge hit with ticket buyers. Only one little problem: it was inspired by a novel (and a stage-play adaptation of it), The Clansman, championing the Confederate vets who formed the Ku Klux Klan.

I haven't gotten around to reading Thomas Dixon's The Clansman (or seeing the play). For all I know it's just like Maya Angelou or Push Based On the Novel Precious by Sapphire.

Oh, but I saw the movie BIRTH OF A NATION all right, the classic that makes celluloid heroes out of the KKK. I saw it in my college film class, and recently on an obscure DVD label I picked up for exactly one buck, on clearance (like I said, nobody's making a very public celebration about this landmark film).

Wow. And to think that it's going to show on the big screen in University Circle this week. I will have plans to be far from there. Open letter to the angry blacks planning to burn the neighborhood down: when you do go on a looting spree at the Cleveland Museum of Art, try not to damage any paintings of dogs playing poker. I like those.

The first part of BIRTH OF THE NATION concerns the Civil War, and the intertwined lives of two noble houses of North and South. In keeping with the sentiments of the era (remember, plenty of Civil War veterans were still around at the time, and very influential), both the Northern and Southern causes are portrayed positively. In the North, abolitionist senator Austin Stoneman (based on real-life Republican Thaddeus Stevens) pushes for an end to slavery, but he falls under the manipulative spell of his mixed-race "mulatto" housekeeper-mistress Lydia. This leads him to groom another ambitious mulatto, Silas Lynch (I'm just waiting for a clever gangsta rapper to adopt that pseudonym), described in subtitles as "a traitor to both races" as a political up-and-comer.

In the South, the respected Cameron family are friends of the Stonemans from military-academy days. Youngest brother Benjamin Cameron (Henry B. Walthall) falls in love merely by seeing photos and hearing stories (well, no worse than having affairs by Facebook or Second Life) about the beautiful Stoneman daughter Elsie (Lillian Gish).

When the Civil War begins, older Stoneman and Cameron sons both die tragically in battle (SPOILER ALERT: Griffith actually ends the picture with a surreal epilogue-coda in which the spirit of War, played by a shirtless muscleman on horseback, gives way to a double-exposure of Jesus Christ, kind of making the whole picture a peace-and-harmony fable, if you can buy that).

Benjamin survives the war with a nickname "the Little Colonel" and a reputation for valor among both Union and Confederate armies. After the South surrenders, a personal entreaty by Elsie to a saintly Abraham Lincoln (AKA "The Great Heart") gets Benjamin a pardon. There are depictions of the treaty at Appomatox and Lincoln’s assassination at Ford's Theater, in which 's title cards are the equivalent of footnotes, informing the viewer that these are AUTHENTIC RECREATIONS. You really have to put yourself into the mindset of a 1915 moviegoer, seeing Abraham Lincoln up there on screen, to have a sense of what a breathtaking impact that must have held.

It's the second half of BIRTH OF A NATION that is, shall we say, problematic.

Carpetbaggers and out-of-control freed slaves sweep through the Camerons’ , lusting after white women and bullying Benjamin off the sidewalk (did D.W. Griffith predict "the knockout game?"). And Silas Lynch is appointed lieutenant governor by the oblivious Austin Stoneman, who can't see the creep even has sexual designs on Elsie.

A famous/infamous climax has the newfound KKK, with Ben Cameron one of the leaders under the white hoods, arriving like the cavalry to save from the predatory negroes and their white-renegade cohorts. For what it's worth, does portray some "good" Afro-Americans too, as "faithful souls" who remain doggedly servile to their former plantation masters. I truly cannot tell, but I think some of them are white actors "painted down" as black, and, in one case, cross-dressed as a fat mammy (did Griffith predict BIG MOMMA’S HOUSE and Tyler Perry’s Madea? Dude truly was a genius).

The sad thing is that it’s this part of the movie, the “rallying of the clans,” for which the filmmaker saves his prodigious gifts in editing and cross-cutting. It’s even more stirring and suspenseful than the Civil War battle sequences that came before. Movie historians say that BIRTH OF A NATION was shown as a KKK recruiting tool right up into the 1960s. To paraphrase Eddie Murphy, thanks, . You been helpful.

In its day, critics, audiences and even the White House hailed the movie (in the title cards, sucks up to Woodrow Wilson like no filmmaker would with a sitting president until, oh, I dunno, Barack Obama?). The NAACP of 1915 was less entertained, calling it “the meanest vilification of the negro race,” which is pretty accurate.

It could have been even more vile; movie histories record that Griffith, much as he protested that he hadn't meant to cause any offense, did consent to cut some 500 feet of celluloid that went even further in depicting bestial blacks tormenting white women (quite a preoccupation of his, it seems), and an outright suggestion that all ex-slaves should have been sent straight back to Africa. Which would be a pretty shabby way to reward those “faithful souls,” if you ask me, but nobody asks me.

Amazing fun fact #1: There does survive in the existing film a strange little prologue in which blames the New England Pilgrims for the catastrophe of the Civil War, for their bringing over the first boatloads of slaves. Assertions such as that are why I have trouble believing in global warming. Because movie people tell me that global warming is real, and they are, as a general rule, insane (if Scientology were around in 1915, something tells me would have joined).

Amazing fun fact #2: It’s become a longstanding argument among academics and activists whether black slavery was a central issue of the Civil War, or whether the plight of black folks was even important at all to Abraham Lincoln. Some say the war happened more over “states’ rights,” economic matters and big-government-vs.-small-government philosophies instead, while black activists and those on the political left would say it was all about the slaves. D.W. Griffith, judging by this film, would say slavery was the crux of the matter. Hey, common ground! As Rodney King said, can’t we all just get along?

Amazing fun fact #3: In getting BIRTH OF A NATION ready for wide release, D.W. Griffith invented the “sneak preview” as it is known today. That’s not racist, just interesting. At least I don’t think it’s racist. Hard to tell at all at this point.

With or without the sneak preview, the movie was a monster, in more ways than one. I have heard a story that I wish I could verify as true or false, that when Jesse Owens was a child – it could have happened either in Alabama, where he was born, or in Cleveland, where his family moved when he was 9 – he was in the street one day when a black adult advised him to clear out, quick, for his own safety. A movie theater down the street showing BIRTH OF A NATION had just emptied out, and a mob of vengeful whites were attacking every random person of color they came across. I’d certainly like to know if that was a theater around here. Can you imagine the 20th century with Jesse Owens either maimed or killed, never participating in the 1936 Berlin Olympics and serving as an inspiring symbol for what was possible in ? All because of BIRTH OF A NATION? No wonder I have this extremely mixed emotional reaction to films and filmmakers.

Well, on the plus side, I don’t recall anyone in the film using the N-word. That puts BIRTH OF A NATION ahead of most hip-hop albums.

In his later years, D.W. Griffith was pushed to the margins of the film industry he helped establish, and died, according to the histories, bitter, lonely and pretty much forgotten in 1948. While some might say that was Justice at work, I’d say no, that’s just how the movie racket treats people; more or less the same happened to Mack Sennett, Orson Welles and who knows how many others who didn’t have George Lucas’ moxie with the action-figure ancillary marketing. Okay, back to the race riots. (star rating withheld so this website doesn’t get burned and looted)

Posted by Charles Cassady Jr. at 8:26 AM