That Guy Dick Miller (May 30th at the Cleveland Cinematheque)

[THAT GUY DICK MILLER screens Saturday May 30th at 9:05 pm at the Cleveland Cinematheque.] 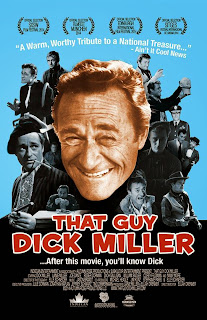 If you're a fan of horror, science fiction, and B movies in general, then character actor Dick Miller is instantly recognizable from his countless roles both big and small. Most often he worked for Roger Corman and, later, Corman acolyte Joe Dante, but he can also be seen in films by James Cameron and Martin Scorcese, and on numerous TV shows. Now in his mid eighties, he doesn't work nearly as much as he used to, but you can see him in Dante's forthcoming BURYING THE EX, and in this documentary from AMERICAN GRINDHOUSE director Elijah Drenner.

As far as show biz documentaries go, THAT GUY DICK MILLER is pretty straight forward. We get a little background about Miller's life, notably his parents' split and a stint in the army, before moving on to the real focus: Miller's film work. Among his credits are LITTLE SHOP OF HORRORS, IT CONQUERED THE WORLD, THE TERMINATOR, AFTER HOURS, ROCK N ROLL HIGH SCHOOL (“Those Ramones are ugly, ugly people”), THE HOWLING, GREMLINS, and the film that features his most iconic role, that of murderous beatnik artist Walter Paisley, A BUCKET OF BLOOD. As one would expect, the doc supplies a generous assortment of clips, and Miller's friends, family, and colleagues offer up various anecdotes about the actor's life and career.

Interestingly, Miller wanted to be a screenwriter, not an actor, but it was not to be. He had a handful of scripts turned into movies in the seventies, including the Jerry Lewis vehicle WHICH WAY TO THE FRONT?, but the experiences were not good ones. Miller also shows some skill as an artist, although his choice of subjects is often bizarre, kind of like a more skilled rendition of the sort of things a high school stoner might scribble in his notebook.


Drenner works primarily as a producer/director of DVD and Blu Ray bonus features, mostly for cult films, and to a large degree THAT GUY DICK MILLER feels like a long one of those. It's enjoyable and informative, if somewhat lightweight, but there's nothing wrong with that. This isn't the kind of doc meant to change the world or capture an important moment in history; it's just a nice little tribute to an actor who maybe never made the big time, but who made the most of every role he ever had. 3 out of 4 stars.
Posted by Bob Ignizio at 12:07 AM