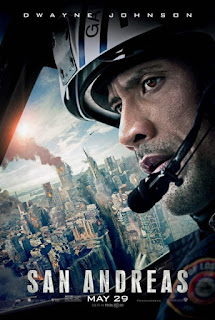 Butt-dumb and light as spun sugar, SAN ANDREAS pits Dwayne Johnson against a rowdy tectonic plate. It’s The Rock versus a rock in a CGI-spackled disaster adventure more fun than its dour trailer suggests, while still less fun than a movie in which The Rock skydives into a collapsing baseball stadium oughta be.

Interestingly, SAN ANDREAS was written by Carlton Cuse, who served as Lost co-showrunner with Damon Lindelof. Just last week, I reviewed  the Lindelof-penned TOMORROWLAND, in which that writer fell devastatingly short of a ridiculously high bar. This week: Cuse ambles over an embarrassingly low one.

When we meet Ray Gaines (Johnson), a rescue helicopter pilot living in the aftershock of his daughter’s tragic drowning, he’s about to lose his wife, Emma (Carla Gugino), to divorce, and his other daughter, Blake (Alexandra Daddario), to college.

As the biggest earthquake ever suddenly busts a move across the Golden State, Gaines must brave the skies, seas and shaky, shaky sidewalks in an epic quest to bring Emma and Blake to safety.  Yes - like so many disaster movie protagonists before him, Gaines (Johnson) is given the chance to bring his family back together as the world falls apart.

And fall apart it does – repeatedly and with computer-enhanced gusto, giving equal time to the ala-Emmerich destruction of national landmarks and the non-specific mayhem of central California going kaput. Director Brad Peyton (CATS & DOGS 2: THE REVENGE OF KITTY GALORE) packs in so many sweeping aerial pre-, mid- and post-mayhem panoramas, one begins to suspect that Gaines’ trusty helicopter is moonlighting as the cinematographer.

For his part, The Rock swaggers right on through. Or, from the waist up he swaggers. See, SAN ANDREAS is like the PLANES, TRAINS AND AUTOMOBILES of earthquake movies, confining  its beefy lead to one mode of transport after another, flaunting an impressive 1:1 vehicle-to-setpiece ratio. ‘Copter to truck to plane to boat, Gaines’ journey is an all-spectacle, no-suspense series of out of the frying pan, into the fire, then out of the fire and into the tidal wave that’s about to destroy the Golden Gate Bridge.

While Gaines commutes through excitement, and his daughter, Blake, gets shaken around San Francisco along with two milquetoast British brothers, Paul Giamatti cowers under a desk at Caltech.

Yup – Paul Giamatti is in this movie.

He plays a geologist named Lawrence who never encounters any of the other main characters. As the mandatory Scientist Who Predicted The Earthquake But No One Believed Him, his primary role is to appear every time there’s an earthquake and warn the public (i.e., reassure  SAN ANDREAS ticketholders) that there are still bigger, worser earthquakes yet to come.

I saw SAN ANDREAS in 3-D, and though the polarizing lenses did nothing for the cardboard characters or flat story, I had plenty of mindless fun playing chaos-hungry rubbernecker as the West Coast shook then broke open then imploded then drowned.

Despite the high theatrics, tumbling cities and raging seas, the movie still feels like something of a step backward: Director Brad Peyton and Dwayne Johnson’s last project, JOURNEY 2: THE MYSTERIOUS ISLAND, found the WWE veteran piloting a giant bumblebee to the lost city of Atlantis. In SAN ANDREAS, he merely drives a motorboat up a tsunami. C’est la vie. (2 out 4 Stars)
Posted by Matt Finley at 1:12 AM