Repost: While We're Young (opens in Akron May 15th at the Nightlight Cinema)

[WHILE WE'RE YOUNG opens in Akron on Friday May 15th at the Nightlight Cinema.] 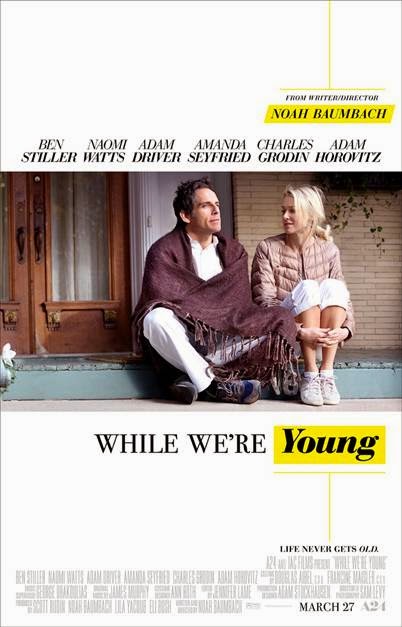 “I always viewed life as material for a movie,” Noah Baumbach once said, and having mined his own life for such films as his precocious debut, KICKING AND SCREAMING, and his breakthrough, THE SQUID AND THE WHALE, the 45-year-old writer and director now addresses the experience of middle age with WHILE WE'RE YOUNG, a comedy starring Ben Stiller and Naomi Watts.

Baumbach, the son of a novelist and a film critic, has described the pressure he felt growing up to read the “right” books — Ford Madox Ford's The Good Soldier rather than beach reading. His films have reflected a drive toward artiness -- black-and-white Truffaut-manqué (FRANCES HA); irritating, hard-to-embrace characters (GREENBERG, MARGOT AT THE WEDDING). With the new film, Baumbach sheds the pretensions. With a story reminiscent of his childhood idol, Woody Allen, it is Baumbach's most mature, accessible and entertaining film to date.

Baumbach's alter ego here is Josh (Ben Stiller), a documentary filmmaker in his mid-40s who is married to Cornelia (Naomi Watts), a film producer. Cornelia works for her father, an acclaimed documentarian named Leslie Breitbart (Charles Grodin), who is  Josh's mentor.
\
Josh and Cornelia are a hip couple, and happily childless until confronted with the arrival of their best friends' newborn, which turns their friends into baby-obsessed bores. After an evening clumsily dandling the baby, Cornelia asks Josh, “You don't want kids, right?” “I like our life as it is,” Josh protests, a bit too vehemently. Neither of their lives have shaped up the way they'd planned. Josh has been working on the same documentary for ten years, a profile of a pedantic old intellectual (shades of Woody Allen's CRIMES AND MISDEMEANORS), while he awaits grant money to complete it. Cornelia's career is linked inextricably with her dad's.

Their lives are further disrupted when they meet Jamie and Darby (Adam Driver and Amanda Seyfried), a married millennial couple. Jamie is an aspiring documentary maker, and Darby makes and sells ice cream. Their lifestyle and pursuits are amusingly contrasted with Josh and Cornelia's. The younger couple are all about DIY. He rides a bike everywhere and builds his own furniture. They upcycle. They keep chickens. They watch VHS tapes and listen to LPs. When the urge arises to know some factoid, rather than reaching for their smartphones, Jamie suggests, with Zen-like wisdom, “Let's just not know what it is.”

Josh is enamored of the 25-year-olds (“I like how engaged they are in everything!”), Cornelia a bit less so, though she's relieved to at least find a girlfriend who doesn't have a baby. In one scene, Cornelia, who has had two miscarriages, tags along along with her friends and their infants to a hellish “Mommy and Me” sing-along, from which she runs away in horror.

The friendship leads the older couple down unusual paths. Josh starts wearing a “hipster” porkpie hat. They participate in a ritual that involves taking hallucinogens, complete with a shaman and a puke bucket. (for “purging dark energies”). Josh and Cornelia's old friends drop them, and their marriage is strained. Cornelia flirts with Jamie, Josh with Darby.

Josh, who was initially flattered to be asked to help Jamie film his documentary, begins to suspect the younger man has lied to him. He now sees the younger couple not as exciting newbies but “entitled little brats.” He is outmaneuvered by the ambitious and unprincipled Jamie, who is poised to attain the success that has eluded Josh. The climactic confrontation scene is beautifully played; Josh denounces his protege and realizes, suddenly, that his argument is flawed: in the age of CATFISH, no one cares if a documentary fudges the facts. Stiller is particularly adept at portraying this mix of rage and embarrassment.

This is a movie more about men than women. Cornelia, for instance, is little more than a satellite of her father and husband, and it's a little hard to believe Darby manufactures commercial ice cream (where does she make it, in her little kitchen?) It also would have been nice if, after establishing that motherhood isn't the answer for all women, the movie movie didn't backpedal on that idea in the end. Still, this is a very enjoyable film. Baumbach's writing and direction are brisk and breezy. He deploys a sharp comic awareness of what it means to be in your 40s, when you feel young but the world tells you you're old. A particularly funny scene has Josh balking at his doctor's diagnosis of arthritis in his knee. “At my age, 44?” It must be, he protests, some non-traditional kind of arthritis. “No,” the doctor replies. “Just arthritis.”4 out of 4 stars.