Repost: The Strange Case of Angelica (May 14th at the Cleveland Cinematheque)

[THE STRANGE CASE OF ANGELICA screens Thursday May 14th at 8:15pm at the Cleveland Cinematheque.] 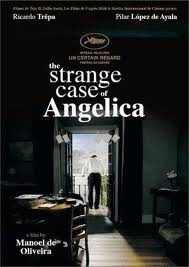 Isaac (Ricardo Trêpa ), the photographer we meet in THE STRANGE CASE OF ANGELICA (O Estranho Caso de Angélica), is a young man but an old soul. He spends his days photographing the vineyard workers across the street from his boarding house, much to the chagrin of his landlady Justina (Adelaide Teixeira ). She can't understand why anyone would take pictures of the men since, as she mentions several times, no one does the job that way anymore. She seems almost embarrassed by these living relics of another time, but Isaac sees nobility in the way they hold on to their old ways.


Isaac's nights are spent reading strange volumes on spirits and angels, at least until one night when he is asked to photograph Angelica (Pilar López de Ayala). Not only is it strange that the hour is so late, but as it turns out, the subject is deceased. Things get stranger as Isaac looks through the viewfinder of his camera only to see Angelica open her eyes and smile. When he puts the camera down, everything is back to normal. After Isaac develops the photographs, they too seem to come to life, and at night Angelica's spirit takes him away on phantasmagorical journeys.

Director/writer Manoel de Oliveira achieves a kind of subtle magical realism here. He uses his fantasy elements sparingly, and with purpose; they aren't there simply to fill us with awe. De Oliveira employs very little camera movement throughout, preferring instead to carefully compose each shot like a painting. You could put a frame around almost any shot in this film and hang it on the wall.

Isaac seems far more at home in his nightly forays to the realm of the spirits than in the modern world, and one can't help but think this is a reflection of de Oliveira's own feelings. 102 (!) years old when he made this film (he passed away this past year at the age of 106), he was the oldest working filmmaker in the world. He began making films in 1931, just as sound was becoming the norm, and has seen countless changes in filmmaking technology and styles, not to mention all the changes that have taken place in the world at large. It's only natural that nostalgia and mortality would be a concern at this point in his life, and de Oliveira expresses those feelings here in a manner both beautiful and timeless. 4 out of 4 stars.
Posted by Bob Ignizio at 12:00 AM