Repost: Clouds of Sils Maria (opeins in Akron May 8th at the Nightlight Cinema)

[CLOUDS OF SILS MARIA opens in Akron on Friday May 8th exclusively at the Nightlight Cinema.] 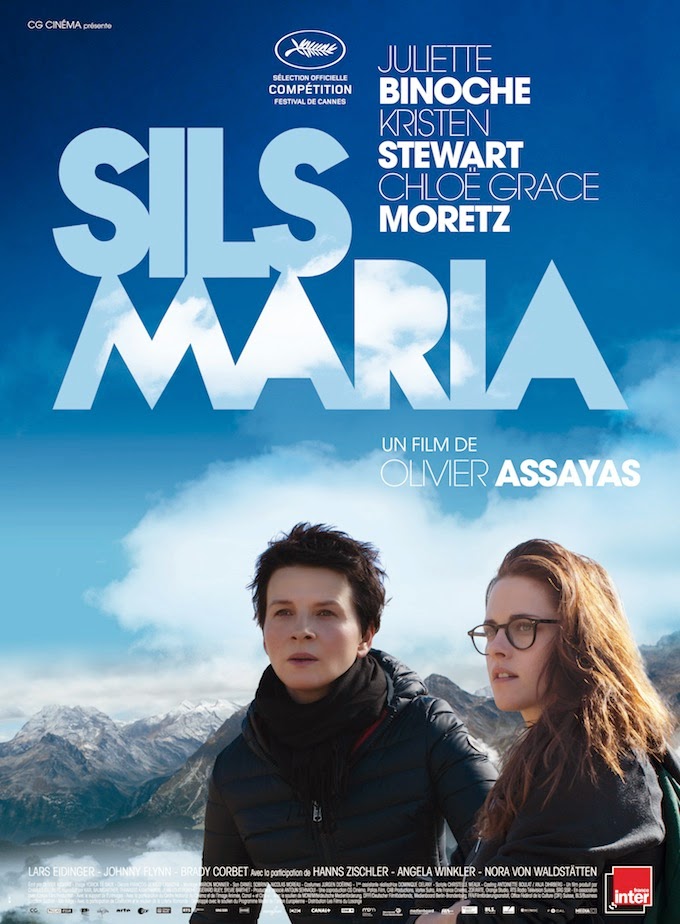 Not to get all Patrick Swayze-ish or anything, but Kristen Stewart really does come across like a gale force twister in Olivier Assayas’ CLOUDS OF SILS MARIA. It’s nearly uncanny—and even a little spooky—how you can’t take your eyes off Stewart no matter who she’s sharing a scene with. Even Oscar-winning French actress Juliette Binoche is pretty much left in the dust by the former Bella Swan. Stewart’s fierce intelligence practically burns a hole through the screen, and I was mesmerized by her single-minded intensity and astonishingly vivid, lived-in performance. As an on again/off again Stewart fan, it’s with a tremendous sense of relief, pride and joy to report that she’s never been better, more self-possessed, or quite frankly alive than she is in Assayas’ marvelous new movie. From the opening scene aboard a commuter train where Stewart juggles two cell phones, a jostling caboose and her diva-licious film star boss (Binoche) without breaking a sweat, it’s pretty clear we’re seeing a supremely confident young actress at the top of her game.

You can sense just how liberating it must have been for Stewart to release herself from the shackles of tentpole/franchise-dom and cut loose with a world-class auteur like Assayas. The fact that Stewart makes her palpable excitement contagious only makes the experience of watching her all the more exhilarating.

Assayas is telling a tale as old as time, or at least talking movies (ALL ABOUT EVE, PERSONA, and Assayas’ own IRMA VEP are just some of the films he pays homage to). Accompanied by her uber-competent personal assistant Valentine (Stewart), celebrated film and theater actress Maria Enders is traveling to Sils Maria in the Swiss Alps to accept an award on behalf of former mentor, Wilhelm Melchior. En route, Maria learns that Wilhelm has died. Instead of attending a celebration in his honor, she’s now preparing a eulogy for Wilhelm’s memorial service. Things become increasingly complicated when theater director wunderkind Klaus (Lars Eidinger) uses the occasion to ask Maria to star in his upcoming production of the same play Wilhelm directed her in decades earlier. But instead of playing the ingenue, he wants Maria to essay the neurotic “older woman” instead.

Jo-Ann Ellis (Chloe Grace Moretz), the young actress tagged for Maria’s former role, is a brash, Lohan-esque tabloid magnet with a tumultuous personal life (she’s currently dating a married novelist whose wife has recently attempted suicide). Needless to say Maria has serious qualms about accepting the new gig. Valentine, her trusted confidante, extolls Klaus’ genius and assures her that Jo-Ann, despite a toxic public image, is really a serious artist. When Maria and Valentine begin running lines in preparation for the start of rehearsals, it’s sometimes hard to know where the text ends and real life begins. Which is Assayas’ entire point since the play is all about the sickly, co-dependent relationship between a conniving younger woman and her increasingly vulnerable (female) boss. Not that Valentine is conniving or duplicitous in any way. In fact, she seems to be the only thing that keeps prone-to-melodrama Maria both sane and grounded. When Valentine abruptly exits her employ prior to Klaus’ London rehearsals, it’s potentially catastrophic. What do you do when your bullshit detector stops working? Particularly if your life is all about navigating bullshit.


Whether directing small-scaled, intimate dramas (SUMMER HOURS, LATE AUGUST, EARLY SEPTEMBER) or propulsion-fueled genre riffs (CARLOS, DEMONLOVER), Assayas’ films always have a sinuous, supremely tactile quality. They seem to float directly off the screen and into your subconscious. CLOUDS OF SILS MARIA is no exception. The heady world of celebrity and privilege navigated by Maria, Jo-Ann and, by osmosis, Valentine is as seductive and alluring as it is fraught with danger, mostly of the psychological variety. When your job is all about make believe, it becomes increasingly difficult to parcel the quotidian stuff—i.e., everyday life.

Assayas craftily chooses to end the film with a backstage chat between a hotshot young film director (brilliantly played by Brady Corbet as a cross between the young Steven Spielberg and a post-MEMENTO Chris Nolan) who’s trying to convince Maria to star in his latest big budget sci-fier. (He claims he wrote the lead role with her in mind, that she alone can do it justice, yadda yadda). Watching their push/pull negotiations—the seducer and the worldly wise, but desperate to be seduced star—is like being privy to the real guardians of the galaxy. It’s both fantastical and real (well, real-seeming) because it cuts to the heart of all of our fantasy projections and mundane realities. Their lives being lived just like ours, only on a (much, much) larger scale. The angels weep. And maybe giggle a little, too. 4 out of 4 stars.
Posted by Bob Ignizio at 12:00 AM