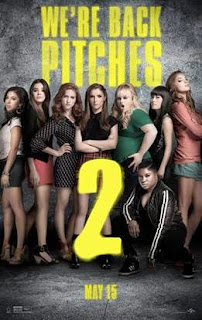 For me, the tone of PITCH PERFECT 2 is set perfectly by it’s two most dramatic commentators, Gail and John. Played by Elizabeth Banks (HUNGER GAMES) and John Michael Higgins (BEST IN SHOW), the overzealous and politically incorrect a cappella super fans embody the intended theatrical whimsy of the PITCH PERFECT series. Plus, they really are funny.

First, a comparison to the original PITCH PERFECT movie (2012). The sequel stuck with essentially the same cast, including the core singing group – The Barden Bellas – with some minor additions and no major players missing from this sequel. Most of the running jokes were also back, which leads me to believe the game plan was to stick with what worked.

The production value appeared to be much higher this time around, including a global music festival in Copenhagen and more intricately choreographed a cappella numbers (of course!). Also under the category of high production value, with added outrageous shock value, was the equivalent of an underground a cappella fight club type scene led by David Cross (ARRESTED DEVELOPMENT, ETERNAL SUNSHINE OF THE SPOTLESSMIND). And the real-life Green Bay Packers were there. Singing a cappella. It’s safe to say that while I would not, in everyday conversation, classify myself as a member of the a cappela community – I was in it for about two hours.

The musical numbers were also higher quality and more appealing this time around, including one particularly rousing Beyoncé mash-up. And so it was no surprise to see Mark Mothersbaugh’s (THE LEGO MOVIE, THE ROYAL TENANBAUMS, and more Wes Anderson works) name scroll in the credits for music direction – they brought in the big guns. Which pays off.

In PITCH PERFECT 2, the reigning champion Barden Bellas find themselves in a new kind of challenge. This time against the a cappella competition ruling body who – after an, ehem, wardrobe malfunction – suspends the group from competing in the United States. Essentially as a mocking gesture, the powers that be allow the Bellas one chance to redeem themselves: win a world championship. Led by their scrappy but ingenious leader Beca, Anna Kendrick (INTO THE WOODS, UP IN THE AIR), the group accepts the challenge.

The world competition brings a new batch of harmonizing nemeses, namely an intense and very intimidating group from Germany. The conflict is vapid, but the performances from the well-oiled German group are impressive for the audience.

Speaking of impressive, the cameos in this movie were excellent. A singing group comprised of Reggie Watts (THE LATE LATE SHOW, COMEDY BANG BANG), Joe Lo Trigliano (BROOKLYN NINE-NINE, SUPERBAD), and Jason Jones (THE DAILY SHOW). Keegan-Michael Key (KEY AND PEELE) as a record producer who “sleeps on a bed of Grammy’s.” And Snoop Dogg, as Snoop Dogg.

But there is plenty of the old Pitch Perfect for the die-hard fans. Plot be damned, everyone is back for another round of singing. Adam DeVine (WORKAHOLICS, NEIGHBORS) as Bumper, a college graduate back on campus working as a security guard, has the most stand out comedic performance. He has a way of making even cheap jokes genuinely funny. Like Bumper, many characters just picked up where they had left off 3 years prior in the original film. Some shockingly so in the case of one senior was still in the Barden Bellas despite being a senior in the original film (“I’ve intentionally failed Russian Lit three times!” she shouts).

New to the family, the freshman songstress named Emily played by Hailee Steinfeld (BEGIN AGAIN, TRUE GRIT), who was a solid addition and worthy heir to the PITCH PERFECT legacy – movie makers made this pretty clear in the final scene, get ready for a third installment.

This second installment was directed (and produced) by Elizabeth Banks, which worked very well. The tone was fun enough, and each minute jam-packed enough, that the wafer-thin plot barely seemed to matter. Did I already mention that Banks is my favorite part of the PITCH PERFECT series?

Writer’s Note: Shout out to the all-girl Sweet Carolines, an a cappella group from John Carroll University, who performed in the movie theater before the screening. 3 out of 4 stars.
Posted by Candice Lee at 12:00 AM