[OF HORSES AND MEN screens screens Saturday May 9th at 7:00 pm and Sunday May 10th at 8:40 pm at the Cleveland Cinematheque.] 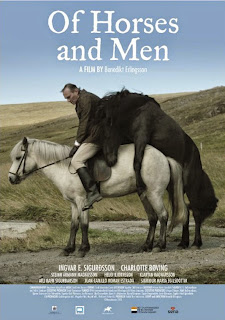 A series of quirky, sometimes darkly comic vignettes explore the relationship between human and horses in OF HORSES AND MEN. The film is set in a small Icelandic village where everyone knows everyone, and where watching one's neighbors with binoculars appears to be a popular passtime. Thus when something as colossally embarrassing as riding one's mare when a stallion comes out of nowhere to, shall we say, “ride” the mare as well, at least half the town witnesses it.

It might sound like the kind of gag you'd expect from an Adam Sandler or Will Ferrell movie, but the tone of the humor is far more matter of fact than in your face gross out. OF HORSES AND MEN also has a grimness mixed with its humor that one would never see in a mainstream American comedy. This is a film in which there are plenty of laughs, to be sure, but along with the comedy comes a fair amount of tragedy. It's hard to really describe the film in terms of plot, as it's just sort of a meandering slice of life. Nonetheless it all gels together into a satisfying and cohesive whole.

Although the film attests that it was made by horse lovers, and there is no reason to doubt that, it should be noted that some viewers may find it tough to watch at times. Both humans and horses die in the course of the film, and if you had trouble with that scene in THE EMPIRE STRIKES BACK where Han has to cut open Luke's tauntaun and stuff him inside, you might want to take a pass.

This is the first feature length film written and directed by Icelandic actor Benedikt Erlingsson, and he acquits himself well. It's certainly one of the more original films I've seen in a long time, and while it may not be an overtly “important” film, it is clever, entertaining, and at times insightful. 3 out of 4 stars.
Posted by Bob Ignizio at 12:00 AM