[MAGGIE is now playing at the Capitol Theatre and is available to rent on various streaming and “on demand” platforms.] 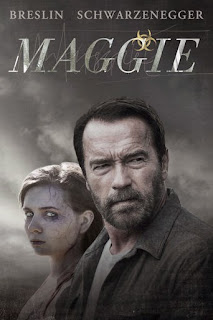 I'm not ashamed to admit that some of my favorite movies are zombie movies. That said, I figured I could easily go the rest of my life without seeing another film about the living dead and be perfectly happy. So much disposable dreck has been cranked out since the double whammy release of Zack Snyder's DAWN OF THE DEAD remake and Edgar Wright's SHAUN OF THE DEAD in 2004 that the genre had become tired and played out, with no new territory left to explore. Or so I thought. Henry Hobson's MAGGIE, from a script by John Scott 3, finds a new twist on the old genre that's both intelligent and heartbreaking.

Wade Vogel (Arnold Schwarzenegger) is a practical, salt of the earth family man living on a small farm with his second wife Caroline (Joey Richardson) and their two kids Bobby (Aiden Flowers) and Molly (Carsen Flowers). Wade's daughter from a previous marriage, Maggie (Abigail Breslin), has gone off to the big city when the zombie outbreak happens. While doing her best to stay alive, she gets bitten. As everyone who has ever seen a zombie film knows, that bite means it's only a matter of time before Maggie turns into a zombie, too. That's why she's being held in a quarantine center, where doctors are prepared to give her a lethal cocktail as soon as she begins to show signs of turning.

Wade isn't prepared to let his little girl die like that, so he calls in a favor from a doctor friend and gets Maggie released into his custody with the understanding that, when things start to progress, Maggie will be taken back to the quarantine center. Wade's doctor friend suggests that taking matters into his own hands might be more humane, though. Whatever choice Wade makes, even if he chooses to do nothing, Maggie will be dead soon, and there's nothing anyone can do about it.

George Romero's zombie films (NIGHT OF THE LIVING DEAD, DAWN OF THE DEAD, DAY OF THE DEAD) each deal with their own particular subtexts, but running through all of them is the idea that, when faced with a crisis, we're in more danger from our own human nature than from any external threat. And don't look to those in authority for answers: the people in charge will always make the worst possible decisions. By contrast, MAGGIE takes place in a world where the forces of order seem to be getting things back on track. That allows the film to focus on more intimate themes rather than the broader sociopolitical issues Romero and most other zombie filmmakers tend to deal with. Specifically, under its horror film trappings, MAGGIE is about two interconnected issues: how a parent comes to grips with the fact that their child is going to die much too young, and how a person with a terminal illness might try to find some kind of control over their final days.

While the film's world building is skillful and its themes compelling, the best part of MAGGIE are its two lead actors. Both Schwarzenegger and Breslin give strong, understated performances that contribute a lot to MAGGIE's success as a film. Schwarzenegger has shown some range in the past, acquitting himself well in comedies like KINDERGARTEN COP and TWINS, and incorporating an appropriate degree of world-weariness into recent action roles in THE LAST STAND and ESCAPE PLAN. This, however, is arguably the first time he's played a true everyman, and he pulls it off beautifully. As for Breslin, she does an excellent job showing her character's struggles both in staving off her transformation, and with deciding how best to wind down her life.

MAGGIE is not really a horror film; it's a drama that uses horror and fantasy tropes to address a tragic aspect of life. Some have described it as slow moving, and I suppose it is. But sometimes a more leisurely pace is what's called for, and if a story about a young woman slowly dying from a terminal disease isn't such a case, I don't know what is.

If I have any gripes, it's with some of Hobson's cliched indie film affectations, like a scene in which a group of teens run around with sparklers that could have been lifted straight from the parody trailer “Not Another Sundance Movie”. Thankfully there aren't too many moments that cheesy. For the most part, MAGGIE generates genuine pathos without being cheap or cloying, telling a grim tale in a way that's palatable enough to be entertaining without losing its impact. 3 out of 4 stars.