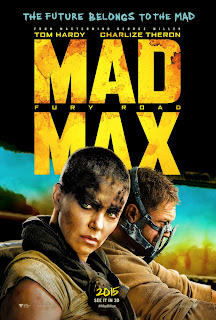 It's hard to review a movie as magic and wonderful as MAD MAX: FURY ROAD... it's just impossible to metabolize so much visceral joy into slack lexical strings without losing the crucial crackling surge of pure love that rare films like this so effortlessly conjure. Or maybe it's just hard to review it without sounding like a 10-year-old at the dusty end of his third Fun Dip pouch running in circles and making car sounds.

So please allow me the occasional hood-kicking VROOM as I assure you that the fourth installment in George Miller's sand-choked, rust-coated, post-apocalyptic odyssey is as vibrant, wild, nasty, and fun as any of its preceding entries - THE ROAD WARRIOR included.

Caged and siphoned as a source of fresh transfusion blood for Joe's irradiated army, Max is given a final chance at redemption when one of Immortan's generals - Imperator Furiosa (Charlize Theron) - absconds with the King's five wives  in an attempt to lead them to freedom and her fabled verdant birthland, "The Green Place."

To describe FURY ROAD as a two-hour car chase would be as reductive as summarizing JAWS as an unscheduled fishing trip... at the same time, once Immortan and his rolling armada of jerry-rigged death machines roar out in pursuit of Furiosa, the movie rarely slows, keeping character beats tight and dialogue spare amid a rolling Blitzkrieg of vehicular homicide, gas fires, chain whips, chain guns and chainsaws all swung, tossed, blasted and shattered across the searing, sun-beaten ambers of day and the deep blue oblivion of desert nights.

To those fearing either an exhausting monotony of car-on-car violence or the inscrutable digital kludge of Bay's TRANSORMERS, know that FURY ROAD's action is balletic vehicular anarchy, with choreography as precise as it is sadistic, crisply shot and boundlessly creative in perpetually uncovering fresh cruelties of physics.

All of it’s enhanced by a pounding, audacious score from Junkie  XL (300) that marries majestic high fantasy with the Viking throb of heavy mallets on treated hides.

Where the cast is concerned, Hardy imbues Max with the perfect ratio of stoic grit to brutalized humanity - a broken man and reluctant savior, driven perpetually into the fray by horrific visions of his murdered daughter. Theron's lithe, grease-anointed Furiosa is Max's hopeful counterpoint, a woman driven forward not by the weight of what she's lost, but rather the gravity of what she still has to lose.

From a screenwriting standpoint, FURY ROAD's concerted lack of exposition serves as a testament to Miller's (and co-writers Brendan McCarthy’s and Nico Lathouris’) respect for his audience and, of course, his ability to create such a visually rich and wildly immersive fictional world. Every vehicle, every makeshift weapon, every bizarre, eclectic character trapping, from the servos of Furiosa's mechanical arm to the Cheshire Cat rictus of Immortan's  skeletal breathing mask, is beautifully designed and constructed.

By relying as much as possible on practical effects - flesh-and-blood pierced, shaved and leering maniacs driving full-functioning spike- and sawblade-covered behemoths - Miller ensures that the Wasteland not only looks amazing, each screeching metallic crunch all the more bone-shaking for the weight of the metal behind it, but also rattles and growls with unspoken history.

To provide any slogging explanation around the dead, feral Earth - its chrome idols, gear oil scripture and unslakable thirst for petrol and blood - would undermine the brazen, giddy insanity of it all.

The truth is, we as an audience must share Max's madness: reluctant sanity in the face of chaos. To remain sane, it's crucial we believe in that chaos but never fully understand it, lest it become somehow relatable... lest it, in some small, fatal way, appear sane.