[LAMBERT & STAMP opens in Cleveland on Friday May 15th exclusively at the Cedar Lee Theatre.] 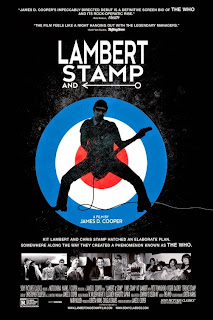 Among British rock bands, there was always something different about the Who. Why, for instance, were so many of their albums created for, or adapted to, the stage? The group pioneered the ambitious “rock opera” with Tommy, Quadrophenia and the ill-fated Lifehouse. Broadway, the Metropolitan Opera House — how did this posh image mesh with the group's scruffy looks and slashing Mod rebellion (“Hope I die before I get old”)?

The key, at last, is found in a new documentary, LAMBERT & STAMP. Directed by James D. Cooper, the film tells the story of the group's long-term relationship with the inimitable Christopher “Kit” Lambert, and his business partner, Chris Stamp, who discovered the band –— then called The High Numbers and playing mostly blues and R&B covers —  and determined to make stars of them. The name Kit Lambert is familiar as the band's manager and producer, but most fans are probably unaware of Lambert's role, alongside Stamp, in shaping, and in a sense creating, the Who.


Lambert, born in 1935, was the son of the noted English symphonic and opera composer Constant Lambert, an emotionally distant father whose creative ideas were nonetheless a strong influence on his son. After attending Oxford, young Lambert worked in the film industry as an assistant director. Hoping to make a documentary, he joined a dangerous expedition to Brazil, during which one of his comrades was killed by tribesmen. The film recounts the fated meeting of Lambert and another aspiring film director, Chris Stamp, the younger brother of the actor Terence Stamp. The seemingly mismatched pair — the upper-class, Oxford-educated Lambert, and Stamp, a “tough-fighting spiv” from the East End — became creative partners and the closest of mates. Lambert was gay, a dangerous thing to be in England in the '60s, and Stamp was not, a fact that actually made them more complementary. “We were both marginalized,” explains Stamp in the film. (He died in 2012 at age 70.)


With the Mod scene, with its scooters and headlamps, in full swing in London, Lambert and Stamp had an idea. They determined to find a “really good rock-and-roll group,” manage them, make them successful, then make a film about them. The group they chose was the High Numbers, a motley, ugly-looking, some said, group of “four complicated, difficult fucking guys,” working-class fellows save for Pete Townshend, who came from a middle-class background. Lambert sensed that the group had a look, and offered them something they never had: a guaranteed salary. (Someone had to pay for all the guitars they smashed.) Lambert took Townshend under his wing, moving him into his flat in posh Belgravia, and showed him how aristocrats live without ever paying for anything. Townshend thrived under Lambert's mentorship, though this caused friction in the band that would become famous for its bitter squabbles and fistfights. Pete became the de facto leader of the band that previously had been Roger Daltrey's.


Lambert encouraged Townshend to write songs, unleashing a formidable literary talent. He gave him English classical records to listen to, which influenced Townshend's trademark chord sound. Lambert taught Townshend about stage presence and “dramatics.” Lambert and Stamp, prescient about trends, developed clever marketing strategies such as inviting only the sharpest-dressed people to the Who's shows and selecting one lucky fellow as “The Face.” Eventually Lambert also took over producing the Who's records.


With abundant, kinetically edited footage and music of '60s England  — the world evoked by the band's Quadrophenia  —  the film is a thrilling experience. Reminiscences by the two surviving band members are particularly illuminating. “A fucking genius,” Townshend says of the late Who bassist John Entwistle, a classically trained French horn player whose bass lines and horn playing contributed so much to the band's unique sound. Keith Moon, the volatile, destructive drummer who died in 1978, was, according to Townshend, “not a drummer.” (Whatever banging about Moon was doing was, evidently, not drumming.) Somehow it all worked beautifully. “We were never meant to be a professional group,” Townshend says. “We were misfits — outsiders.” Destroying the instruments was a way of showing disrespect for convention, by “not honoring electric guitars.”


Simon Napier-Bell thought there was more to it, deriving from Kit Lambert's drive to repeat the destruction of his father's life. Constant Lambert had been unable to repeat his early musical triumphs, and drank himself to death at 45. Writing in the Sunday Times, Napier recalls:

Kit once told me, "Just to succeed in life is banal to the point of failure. The purpose of success is to have something substantial to wreck. And the ultimate triumph is to create a magnificent disaster.' Later, this philosophy gave the Who their stage act. Every evening at the height of their performance, the group smashed their instruments. Most critics saw it as anarchy or an incitement to violence, but it wasn't that at all -- it was musical suicide. At the moment when the group had the greatest rapport with their audience, they destroyed their means to communicate with them. It was Kit Lambert's glamourised stage version of his father's alcoholic death.

A parting of the ways between mentor and protégés was inevitable, and it came about over the Who's rock opera Tommy, which had begun as a story by Townshend about spiritual enlightenment. In Lambert's hands, it became a saga about growing up in postwar England — arguably a better story, but not what Townshend wanted. When Lambert and Stamp shopped a Tommy movie script — which had been their aim from the beginning — Townshend balked. (One imagines that film would have been a lot better than the vulgar Ken Russell version made later.) Lambert moved to Venice, then New York City, producing successful records but eventually succumbing to decadence, drinking and drugs. The band, by now quite wealthy, ended up suing Lambert and Stamp, creating a bitterness that lasted decades.

Though otherwise rich in detail, the documentary avoids describing Lambert's death. He died at 45 (just as he had predicted he would), of a cerebral hemorrhage caused by a drunken fall down his mother's stairs in London. This film is an affectionate tribute to him, a uniquely gifted, generous and undersung rock luminary. 4 out of 4 stars.
Posted by Pamela Zoslov at 12:00 AM