Iris (opens May 22nd in Cleveland at the Cedar Lee Theatre)

[IRIS opens on Friday May 22nd in Cleveland exclusively at the Cedar Lee Theatre.] 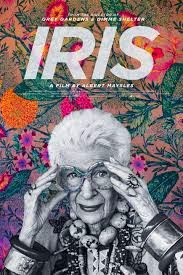 Remember that Monty Python sketch (actually a bit of Terry Gilliam animation) about how you can collect and put around your dwelling-place portraits of perfect strangers who lead far more interesting lives than you've got? That way you can pretend they are YOUR relatives, and that YOU are now MORE interesting by fiat? I promise, the idea was funny.

Should you wish to really meet somebody much more fascinating than yourself (or myself), one need look no further than IRIS, the final feature by the late documentary eminence Albert Maysles, who died earlier this year. IRIS is an affectionate portrait of a spry and witty figure in the field of fashion and design, Iris Apfel.

Still elegant in her 80s, with her trademark oversized glasses, tastefully attention-getting outfits, and a practically Seussian array of costume jewelry (some of her adornments, from the Himalayas, she says are so heavy she can only wear them for short periods of time), Iris Apfel continues to be a NYC fashion/design scenester. Even if old age has slowed this silver fox down a bit.


In the course of the feature Iris does media appearances from Martha Stewart to what I guess is some kind of home-shopping TV deal, and attends parties and openings around Manhattan (look for New York Times fashion/street photojournalist Bill Cunningham, subject of another documentary BILL CUNNINGHAM, NEW YORK on the job). She talks about her early career as an interior decorator that somehow, without any grand plan, metamorphosed into becoming a premiere tastemaker. Hailed for an unmatched collection of costume jewelry from around the globe, she winds up with her own art-exhibit retrospective. She also becomes something of a muse for photographer Bruce Weber.

A colleague/admirer informs Maysles' lens that Iris Apfel frequently complains about all this nonstop motion and exposure, but don't believe anything she says; she really loves the lifestyle.

Perhaps quibblers may think IRIS a minor bauble compared to earlier documentary landmarks done by Albert Maysles and his brother David (who died in 1987) such as SALESMAN, GIMME SHELTER, GRAY GARDENS, etc. This one is destined to be pigeonholed with those oh-so-fabulous snapshots of fashionistas as MADEMOISELLE C, THE SEPTEMBER ISSUE, LAGERFELDT CONFIDENTIAL etc. Movies that really aren't that much removed from a segment on that fine TV show Lifestyles of the Rich and Famous.

But what comes through - albeit, if you know in advance that this was, in fact, Albert Maysles' last movie - is the sense of mortality, of a non-retiring senior going unconquered into her twilight years, presumably as interpreted by an aged filmmaker with a similar mission. Here's Iris and her beloved husband of six decades Oscar (news flash: there's actually been successful marriage on the New York arts scene - stop the presses) sharing the home movies and Kodachrome snaphots Oscar took of their travels to faraway and exotic places. Childless by choice, they determined to live exactly the way they wanted, and someone describes their tchotchke-filled home together as a dream place for two kids.

During the arc of the picture, though, Oscar retires to a Florida assisted-living community (Iris helps celebrate his 100th birthday), leaving Iris alone and having to face the melancholy chore of finally selling off their collections. It's sad, but it's inevitable, and Iris does it dutifully and with style. And then off to the next personal appearance. She's still making the world a more attractive place for her being in it, even at an advanced age.

And good for her. Good for Albert Maysles, as well. 3 out of 4 stars.