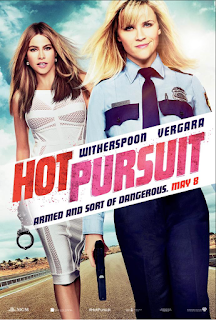 I thought after seeing PAUL BLART: MALL COP 2 that it was a shoo-in for worst movie of the year. But then along comes HOT PURSUIT to give it a run for its money. Where BLART seemed to actively work at being bad, HOT PURSUIT is a textbook example of lazy filmmaking. It's almost unfair to say this film had a script. More like a buddy picture “mad libs” that had all its blanks filled in the most unimaginative way possible. Since they didn't try, why should I? Instead I'm just going to reuse my review of 2013's THE HEAT, the film whose success is likely responsible for this knock-off:


Everything about THE HEAT HOT PURSUIT is lazy and uninspired, from its generic title to a soundtrack that feels like someone hit shuffle on their iPod and just went with the first dozen or so tracks that came up. The “wunza movie”/buddy cop premise at the heart of the film is as stale as most of what passes for jokes, and none of the characters even remotely resemble people who exist in the real world.


Okay, that's enough recycling. The filmmakers responsible for HOT PURSUIT may be content to be that lazy (even their film's title has been used before, by the 1987 John Cusack vehicle of the same name), but I feel kind of bad about it. I'm still going to recycle that "wunza movie" joke I stole from Roger Ebert, though.

Reese Witherspoon is Officer Cooper ("wunza by-the-book but inept police officer who has trouble keeping a boyfriend) and Sophia Vergara is Daniella Riva ("wunza sassy Latina who's supposed to testify against a drug cartel). After Daniella's husband and the FBI agent assigned to guard the Rivas are killed in the crossfire of two separate pairs of assassins, Cooper and Daniella go on the lam, the plucky police officer determined to get Mrs. Riva to the courthouse, Mrs. Riva determined to ditch her would be protector for plans of her own. Action and hilarity in theory would follow, but they do not.

So what meaningful insights can I offer particular to this film? For starters, watching it made me keenly aware of the general disconnect between myself and much of the audience. I would say this is a film utterly devoid of laughs, and for me it was, but a large segment of the audience seemingly found the cliché ridden jokes and tired stereotypes this movie trotted out hilarious. I'd also say it's a shame to see Reese Witherspoon waste her talents here after a string of interesting roles in films like WILD, INHERENT VICE, and MUD, but the truth is HOT PURSUIT will probably make more money and do more to keep Witherspoon in the public eye than those three movies combined.

After about 30 minutes of “jokes” about Vergara's accent and cleavage, Witherspoon's “mannishness” (only in the movies), faux lesbianism, and tampons (not that I mind a GOOD tampon or lesbian joke, but these aren't good) I considered getting up and leaving. And I might as well have left, since every turn the plot takes could have been predicted by that point. Or, to go back to my review of THE HEAT: “This is the kind of movie where there's no need to preface any description of the plot with “SPOILER ALERT” because only someone who has never seen another movie would be surprised by anything that happens.”


I understand that with all the big macho action movies these past few weeks, there are likely some moviegoers out there starved to see a movie that's a little less testosterone soaked. Those audience members deserve an alternative, but they deserve a better one than this. 1 out of 4 stars.
Posted by Bob Ignizio at 12:01 AM