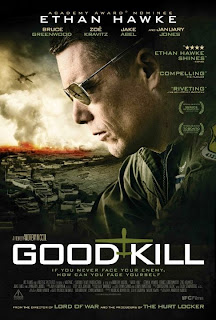 GOOD KILL is a bit like an Oliver Stone movie on Quaaludes. Certainly the topical subject—drone warfare in the post-digital age—is uber-Stone-y, but the execution is dreamy and purposefully disorienting. It’s as though the DOORS-era Stone had directed WORLD TRADE CENTER. Writer-director Andrew Niccol’s background in thinking man’s sci-fi (GATTACA, S1M0NE, IN TIME, and THE TRUMAN SHOW, which he scripted for Peter Weir) informs his new film both stylistically and intellectually. Yet the Niccol work it most eloquently bookends—it almost serves as a companion piece—is his bonkers 2005 dark comedy LORD OF WAR in which Nicolas Cage played an international arms dealer. KILL is a modern take on combat in which the very concept of “arms dealer” seems almost quaintly old-fashioned. Why bother stockpiling military hardware (or WMDs for that matter) when a drone can do the job with no muss or fuss? All you really need is a computer console and a moderately skilled gamer.

For Ethan Hawke’s Major Thomas Egan, who previously flew F-16s during six tours of duty in Iraq, manning a control panel inside his boxy cubicle at a military base outside Las Vegas feels almost punitive. “I miss the fear,” he confesses. “The most dangerous thing I do is drive home on the freeway.” The adrenaline rush Tommy used to experience in a cockpit has been replaced with an almost narcotized sense of detachment.

That disorientation extends to his home life as well: he’s essentially blocked out his wife (“Mad Men”’s January Jones, very strong in an underwritten role) and two young kids. Unwilling and unable to share what he does every day at “the office,” Tommy has become a closet booze hound to help dull the (psychic) pain. He’s also turning into a dime-store cynic. When a friendly cop asks how “the war on terror” is going, Tommy snaps, “Kind of like your war on drugs.”

Things reach a breaking point when the C.I.A. (snarkily nicknamed “Christians in Action” by his workplace compatriots) becomes personally involved in the drone program. The disembodied voice of a ruthless C.I.A. analyst in Langley, Virginia begins calling the shots, and collateral damage becomes an increasingly frequent, even desirable part of the job. (Peter Coyote, who played a more humanistic sort of government op in Steven Spielberg’s E.T. - THE EXTRATERRESTRIAL, provides the voice of the C.I.A. )

Hawke is dependably solid in what is essentially a recessive role. There’s more heat generated by Bruce Greenwood as Tommy’s superior officer (of course, Greenwood’s Lt. Col. Johns gets Niccol’s best lines) and Zoe Kravitz (the daughter of Lenny Kravitz and Lisa Bonet) as Suarez, an idealistic rookie officer who joins the team.

Suarez’s gradual disillusionment with her new line of work coincides with Tommy’s professional and personal meltdown. She at least can ask for reassignment. The only available options for Tommy are considerably more somber. He’s either going to screw up on the job (which he does intentionally) or take a (self-inflicted) bullet. After his wife moves out, taking the kids to live with her sister in Reno, Tommy is forced into (finally) taking some kind of decisive action. The cautiously optimistic ending rings false, though, and feels like the one time Niccol’s otherwise bleak vision may have been muted.

GOOD KILL is marked with the same chilly intelligence, visual bravado, and sly wit that’s distinguished every Niccol film to date. But with chilliness comes emotional detachment, and the movie ultimately suffers from the same problem many military personnel have experienced in Tommy’s shoes. The tone is curiously emphatic and muffled at the same time. It all feels a tad remote, even surreal, and we never quite experience the sting of death inflicted by the drone operators. First-person shooter video games offer more catharsis. 3 out of 4 stars.