Deli Man (May 16th and 17th at the Cleveland Cinematheque) 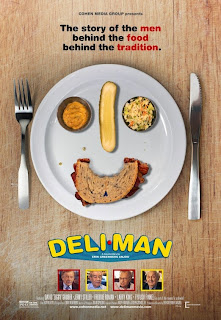 The delicatessen has long been a part of Jewish-American life. DELI MAN chronicles the history of this culinary institution from a peak in the thirties, when New York alone boasted thousands of delis, to the present day in which only about 150 remain in the entire United States. It's a story filled to bursting with pastrami and corned beef, told by the admittedly “mashugana” (crazy) individuals who keep the tradition alive, and their customers both famous and not.

Although the film interviews a number of deli owners still plying their trade in New York, it's Ziggy Gruber, a trained French Chef who learned the deli business as a kid from his grandparents, who gets the most screen time with his Houston, TX establishment Kenny and Ziggy's. So yes, in case you were wondering, there are Jews in Texas, and they make a damn fine sandwich. Going to the deli is about more than just food, though – it's a huge part of the Jewish-American cultural tradition. Perhaps somewhat surprisingly, delis also helped “Americanize” many Jews back in the thirties.

Rounding out filmmaker Erik Greenberg Anjou's trilogy on Jewish culture (the other two films being A CANTOR'S TALE and THE KLEZMATICS – ON HOLY GROUND), DELI MAN is a likeable enough film that probably covers about all you'd ever want to know on the subject. Possibly more than you'd want to know. In all honesty, it feels like something that would have been more at home on the Food Network than a theater screen. As with many documentaries, those with a particular interest in the subject will probably feel more inclined to seek it out, and get more from it, but even casual viewers should have a pleasant time listening to the stories and eyeballing the mouthwatering food. 2 ½ out of 4 stars.
Posted by Bob Ignizio at 12:00 AM