[IN THE NAME OF MY DAUGHTER opens in Cleveland on Friday May 29th exclusively at the Cedar Lee Theatre.] 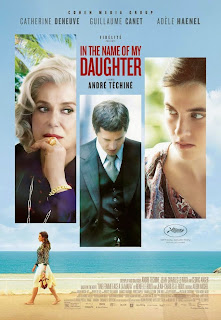 Despite a ghastly title that makes it sound like an unwanted sequel to NOT WITHOUT MY DAUGHTER, Sally Field’s 1991 Iranian button-pusher, IN THE NAME OF MY DAUGHTER is considerably classier than its Lifetime Movie monicker would suggest.

Of course, why shouldn’t it be? DAUGHTER was directed and co-written by Andre Techine, one of the brightest lights of the post-New Wave generation of French auteurs. If Techine’s latest— which premiered at last year’s Cannes Film Festival—isn’t among his finest work, it’s still infinitely better than 99% of what passes for “entertainment” at Ye Olde Multiplex these days. Re-teaming for the seventh time with screen legend Catherine Deneuve, Techine has taken a seamy true-life story (affectionately referred to as “Affaire Le Roux” in French tabloids) and given it a luxe, nearly (Douglas) Sirk-ian treatment. It’s easy to imagine a 1950’s Hollywood version starring Lana Turner in Deneuve’s glamorous role as imperious casino magnate Renee Le Roux. And just like numerous Sirk (or Joan Crawford) heroines of yore, Renee has major issues with a problem child.

Agnes (Adele Haenel), Renee’s daughter, has just returned to the nest after a rocky five-year marriage ended in divorce. At loose ends, the capricious Agnes decides to open a boutique bookstore (financed by Mommy Dearest’s dwindling fortune, natch) and, even more impulsively, embarks upon an affair with Renee’s womanizing, upwardly mobile lawyer, Maurice (Guillaume Canet, best known as director of the 2008 sleeper hit, “Tell No One”). Agnes’ bookstore, after some rough early patches, is a qualified success. Her affair on the other hand has disastrous consequences for all concerned.

Miffed that Renee has passed him over for a promotion, Maurice coerces Agnes into teaming up with him to snatch Renee’s Palais de la Mediterranee away from her. A key accomplice in their nefarious scheme is Fratoni, a Mob-connected businessman wonderfully (under)played by Jean Corso. But when Agnes grows increasingly clingy, Maurice does everything within his power to, um, distance himself. Whether or not that included murder—Agnes disappeared after a lover’s spat, yet her body was never found—is a mystery that has bedeviled French authorities and delighted scandal-mongers for more than thirty years. (The movie opens in 1976 and concludes three decades hence.)

The incomparable Deneueve remains an international cinema treasure. She single-handedly makes a not especially likable character (the uber-pushy Renee can be a real handful at times) seem both noble and even sympathetic. Renee’s dogged quest to get to the bottom of Agnes’ disappearance—and punish Maurice for his real, and merely perceived, criminal misdeeds—consumes the bulk of the film’s somewhat lumpy third act. A busy postscript would seem to indicate that the film might have worked even better as a television miniseries. There’s only so much juicy material Techine can cram into a two-hour movie after all.

Ostensibly more frivolous in its “Lifestyles of the Rich and Famous” concerns than such previous Techine/Deneueve pairings as MA SAISON PREFEREE, LES VOLEURS, and Changing Times, IN THE NAME OF MY DAUGHTER is still expertly, even sumptuously crafted (Julien Hirsch did the glistening cinematography), splendidly acted (Haenel is a major discovery) and utterly riveting throughout. It’s also more enjoyable than THE GIRL ON THE TRAIN, Techine and Deneuve’s last (and considerably more somber) collaboration which was also based on a true story about a mother and her troubled daughter.

Even though the pulpy melodrama and oversized characters seem better suited for a Harold Robbins potboiler (“Where Love Has Gone” anyone?) than French arthouse cinema, it’s remarkable how Techine is able to make the material his own. Since nearly all of Techine’s films (some more obliquely than others) have considered l’amour fou as a central motif, the increasingly tortured push me/pull you power dynamics between Renee, Agnes and Maurice are ideally suited for his (frequently neurotic, ever fascinating) wheelhouse. What’s the French word for “yummy”? 3 ½ out of 4 stars.