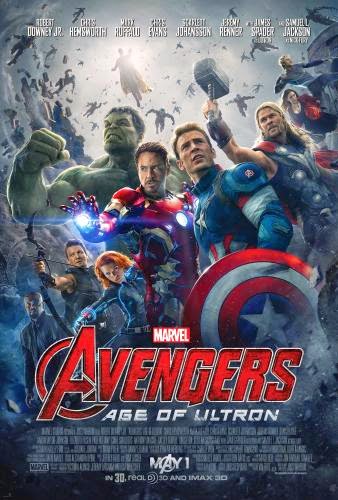 The first thing to cross my mind when I left the theater after watching Marvels AVENGERS: AGE OF ULTRON was ‘I cannot wait to watch this again’, but then again, I am that kind of nerd. I then looked at my 6-year-old son who had accompanied me and asked him how he liked it, and he replied with a smile and the word ‘awesome’. But after a moment of consideration he finished with ‘but it is not better than GUARDIANS OF THE GALAXY (Marvels last big screen adventure). Out of the mouths of babes, the kid is right… but not by much.

The thing missing from AoU that GotG had going for it is the freshness and unexpected cool of the characters we had never met. This new Avengers movie does have a slight ‘been there, done that’ feeling about it as we already know most of the players pretty well by now, being 11 films deep into the Marvel Cinematic Universe franchise. That said, the movie does give some great moments to the lesser-used Avengers like Jeremy Renner’s Hawkeye and Scarlet Johanson’s Black Widow.

The film takes off like a rocket and hardly stops for breath. It is by far the fastest paced Marvel movie up to this point. It assumes you know who these people are going into the film (although if one knew nothing about these characters the movie would still be a great action movie in its own right) and the action hits hard right out of the gate when we join the whole team as they take down a HYDRA base that holds that pesky, Coulson killing scepter of Loki’s. As familiar as we are with these heroes when this movies starts, the Avengers as we know them are in a completely different place at the end of the film and this HYDRA base holds more than a few secrets that impact the gang.

There are plenty of new faces that engage Iron Man (Robert Downey Jr.), Thor (Chris Hemsworth), Captain America (Chris Evans), Hulk (Mark Ruffalo) and the afore mentioned Hawkeye and Black Widow this time out. My favorite of the newcomers to the franchise is Paul Bettany as Vision but that is not to say that the duo of Aaron Taylor-Johnson and Elizabeth Olsen as brother and sister team Quicksilver and Scarlet Witch don’t kick plenty of tail as well. All the roles are acted well and stay true to the tone of their comic book roots.

Joss Whedon directs the action in this outing with flair and uninterrupted camera moves that will leave your jaw on the floor. If you think you have seen all there is to see of the Hulk verses Iron Man/ Hulkbuster armor fight from the advertising than you are very wrong. All of the action is stunning and engaging in this romp and at times it is downright crazy to watch.

I don’t want to spoil a single thing for the true believers out there so I am not going to talk about the story beats but I will say that many of the threads from other movies are addressed as well as the over-arcing story that will come to fruition in the next two Avengers films. Groundwork is also laid out for the upcoming Marvel flicks Captain America: Civil War and 2018s Black Panther.

What Marvel has done since 2008 is nothing short of miraculous. Their TV shows and movies that all live in the same fictional universe have all been good to great entertainment and that continuity somehow makes it all the more fun. To know that the gritty Daredevil show on Netflix is happening on the same Earth as HYDRA and the Avengers as well as the otherworldly places of the Thor movies and Guardians of the Galaxy add to the gravity of each new installment in the MCU. In fact, this weeks Agents of S.H.E.I.L.D. is directly linked to the events in AoU.

In closing, if you are already into these stories you already KNOW you want to go see this movie but if you are on the fence about it I can assure you that it is a solid and fun two hours at the movies. As I stated in the first line of this review, I cannot wait to see this again. My son agrees.
A STRONG 3 out of 4 stars.
Posted by Bob Ignizio at 12:00 AM