An interview with 'We Are Still Here' director Ted Geoghegan

[WE ARE STILL HERE screens Friday May 22nd and Saturday May 23rd at midnight at the Capitol Theatre. Writer/director Ted Geogegan will be present for a Q & A after the film both nights.] 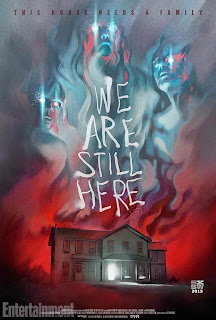 Ted Geoghegan has written and produced a number of films since 2004, most in the horror genre, but this year's WE ARE STILL HERE marks his first time directing a feature film. Turns out he just may be suited for it, as WE ARE STILL HERE is already garnering a considerable amount of praise both from horror specialty sites and publications, and mainstream critics, too. It's an atmospheric horror film that draws influence from a particular kind of late seventies/early eighties supernatural horror film, perhaps best exemplified by the works of Italian director Lucio Fulci (ZOMBIE, THE BEYOND, CITY OF THE LIVING DEAD, HOUSE BY THE CEMETERY, etc.,). The film is currently playing limited engagements in select cities, including a pair of midnight showings May 22nd and 23rd at Cleveland's Capitol Theatre. Ted will also be doing a Q & A session after each screening, but in the meantime I had a Q & A session of my own with him via email.


CLEVELAND MOVIE BLOG: How did you get interested in filmmaking, and what drew you to horror in particular?
TED GEOGHEGAN: I've had a huge love of film my whole life. Growing up in rural Montana, I found that genre films offered me a wonderful escape from everyday life, and were the fastest and safest ways to transport myself to unbelievably far-off places. Horror served as a thrilling escape - one that would terrify, but safely. And as I grew, I learned to cherish that fear, and respect the films that could properly accomplish it.

CMB: You've written and/or produced a number of films over the past decade or so, but aside from your early short 'Ghouls Gone Wild' you haven't directed (at least according to IMDB). What made this the right film for you to make your feature directorial debut?
TG: I've written a number of features over the past 15 years, but this was the first time I'd felt like the project was something I wanted to tackle as a director. I loved the characters and setting so much, I realized I wanted to stay with them past the script phase. I'd originally written the film for another director to take on, but as the script took shape, I asked his blessing to see if I could find a way to make it myself. He was very supportive.

CMB: What was the genesis for WE ARE STILL HERE?
TG: As mentioned, I'd written it for another director, but once I had been granted permission to seek my own producers, I brought the script to my friend Travis Stevens at Snowfort Pictures, who, in turn, struck a deal with Dark Sky Films. They were very eager and excited about the film, and - once the gears started turning - it all came into being very quickly.

CMB: A lot of people have talked about the Lucio Fulci influence on the film, but it thankfully doesn't feel like a lazy pastiche, and there's little if any of the kind of scenes Rob Zombie and Eli Roth sometimes do where it's like, “hey guys, look at me doing a scene from another movie we all love” that can get kind of grating. To what degree were you trying to emulate Fulci's films, and how did you find the balance between that and just telling a good, original horror tale?
TG: The goal was never to emulate Fulci's films, but rather, to pay tribute to the style and tone he'd created in his movies while doing something fresh and original. From day one, the goal was always to tell a good, original horror tale - but being able to toy with some of the tropes so expertly used in Fulci's filmography gave us a unique opportunity to tell our story in a way that horror fans hopefully have not experienced in thirty years or so.

CMB: As a long time horror fan who had his mind blown by RE-ANIMATOR and FROM BEYOND, it was nice to see Barbara Crampton in one of the lead roles. Aside from that cachet of horror history she brings with her, what in particular made her your choice for the role?
TG: Barbara is a very close friend of mine, and I'd written the role of Anne with her in mind. While I too am a huge fan of RE-ANIMATOR, FROM BEYOND, and yes, even CHOPPING MALL, Barbara's so much more than a "scream queen", and I just wanted to create a role for her that would allow audiences to see just how talented she was, and just how nuanced a performance she was capable of giving.

CMB: You also have Larry Fessenden in a major supporting role. He's produced, directed, and starred in some of the most interesting indie horror films of the last two decades. Other than his memorable performance, did he bring anything to the production in terms of advice or ideas?
TG: Larry is also a very good friend, and the role of Jacob was written for him. I'm always so excited when I see Larry pop up in anything, and I'm usually so disappointed when he's killed off ten seconds later. I wanted him to have a meaty role, and one that audiences would remember. He brought so much more to the role than I ever could have imagined, and I was always open to his ideas. Having produced and directed many of my favorite films of the past two decades, there was no way I was going to turn a deaf ear to any ideas or concepts he brought to the table. His insight was truly invaluable.

CMB: These days it seems like even the simplest effects are done in post using CGI, but you used mostly, if not all, practical effects in your film. That's certainly my preference, but what do you think are the benefits of going that route?
TG: Practical effects are tangible. They're actually there - and our brains warmly respond to that. There's a reason why the Mos Eisley Cantina, way back in 1977, stills seems far more real than anything we see in the STAR WARS prequels. Because it was a real place, populated with real creatures. I wanted my very unreal movie to feel as real as possible, and for my ghosts to feel like they were actually there. The only CG we used was to accentuate the heat coming off their charred bodies and, even then, we tried to keep it as minimal as possible.

CMB: When you're making a low budget film like this you can't just throw money at every problem to smooth it over. Were there any particularly difficult obstacles you encountered during the making of the film that you're especially proud of the way you managed to overcome them?
TG: The production of the film went swimmingly, and did not suffer from any issues or obstacles. Similarly, our budget was exactly what we needed to tell this tale, and was never detrimental to getting our story on the screen.

CMB: Given that it's geared towards a somewhat older audience, and a niche one at that, how hard was it securing financing and distribution, and how did you ultimately wind up with Dark Sky, who I know primarily from their DVD and Blu Ray releases of older horror classics?
TG: Even with its more mature cast and nods toward the 1970s, the film is hopefully quite accessible to horror fans of all ages. As stated earlier, the project was brought to Dark Sky Films by my producer Travis Stevens at Snowfort Pictures. Aside from the classic genre titles they distribute, they produce a lot of great new horror, including the HATCHET sequels, HERE COMES THE DEVIL, LATE PHASES, and FRANKENSTEIN'S ARMY.

CMB: What's next for you? Do you plan to focus more on directing, or will you keep doing a bit of everything like you have been?
TG: I like being a Jack of All Trades. I'd love to direct something else in the near future, but I'm also planning on writing, producing, and doing all the other things that make me happy in this industry. Life's too short to slap a label on anything.
Posted by Bob Ignizio at 12:00 AM