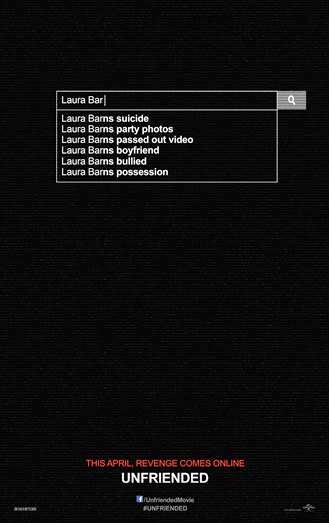 The tagline of UNFRIENDED is “If you sign off, you die!” If that doesn’t sound appealing to you then you may know right away that this might not be your kind of thing.

The setup and premise are simple: The movie plays out entirely on the computer screen of our lead, Blaire (Shelley Hennig, OUIJA), a high school girl who is dating her Skype buddy, Mitch (Moses Jacob Storm).  All plot details are revealed to the audience through Skype, iMessage, Facebook, Gmail, YouTube and an assortment of other sites. If you are unfamiliar with online jargon and websites geared to teens and young adults, it may be difficult to keep up at times.

One year before the film takes place, a high school girl named Laura - a close friend of Blare’s - commits suicide after having an embarrassing video posted online. Many of her peers bullied Laura and urged Laura to kill herself out of cruelty, and tragically she does. Worse, even the suicide video was posted online.

Now, on the one-year anniversary of her suicide, six friends who are video chatting start to get messages from Laura on Facebook and strange messages on Skype from someone named Billie. Our teens are sure it’s an internet troll and dismiss the interruptions. But things aren’t that simple when dark secrets are revealed and people start dying. As the tagline implies, signing off is not an option for our adolescents (by the way, all the “teen” actors in this film are well into their 20’s).

Some may consider the idea of an entire movie playing out on one computer screen new or cutting edge – something the audience has never seen before. [Editor's note: it's not. See Bob Ignizio's review of THE DEN, a film released in the U.S. a little over a year ago.] Once is enough for any moviegoer. Maybe writer Nelson Greaves is trying to convey a critique of how the modern teen lives online, but it feels more like one big gimmick.

Suicide plays a large role in the film. And if this is supposed to be a parable telling people to be kind to each other online, it treats suicide so coldheartedly that the entire message is lost for the sake of scares. This is horror for the new MTV generation  of "Teen Mom" and "Catfish". And it just so happens an MTV tab for TEEN WOLF is open on screen for the whole movie. The lead actress in this movie also happens to star in that show.

UNFRIENDED does manage to provide some creepy moments. These are subtle moments in which our characters feel confused. There are some really nicely done musical cues, coming through Blaire’s Spotify. Sadly, UNFRIENDED mistakes gross out, in your face footage for scares - maybe for some, but not for this reviewer. There may be a market for this movie, but because of the R-rating, much of that audience will be denied admission. 1 out of 4 stars
Posted by Joseph Anthony at 12:01 AM