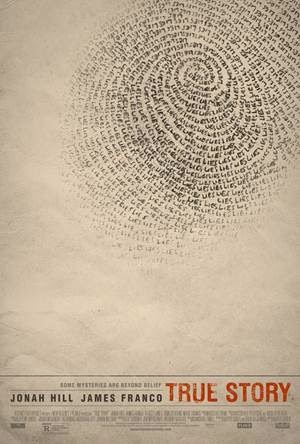 Like a warmed over diet cola version of In Cold Blood, TRUE STORY pits a half-as-eccentric author against a fractionally mysterious killer for a movie that’s as flat and artificial as the aforementioned soda.

The story, which is adapted from journalist Mike Finkel’s autobiographical book of the same name, is a bizarre and entrancing character drama. The film, directed by British theater director Rupert Goold, is a bumbling, half-cocked crime thriller, feigning intensity and pretending at brilliance while its two potentially spitfire leads languish in a mire of superficially portentous montages and lingering close-ups.

As the film starts, Mike Finkel (Jonah Hill), The New York Times’ swaggering It Boy, is fired for grievously embellishing the facts of an article in the name of emotional impact. Disgraced and blackballed from print media, Finkel returns to his home in Montana only to learn that wanted fugitive Christian Longo (James Franco), an Oregonian accused of murdering his entire family, has just been arrested in Mexico… posing as Finkel.

Desperate to sell a story and intrigued by the mysterious stranger’s invocation of his name, Finkel begins interviewing Longo in prison, hoping to coax a true crime tell-all out of the accused.

The choice of Goold as director feels appropriate -  Finkel’s misadventure, confined as it is to the home he shares with his distant (or, more accurately, distanced) wife, Jill (felicity Jones), and a small visitation cell in which he and Longo play an endless, teasing snake-and-mongoose game, could have just as easily been adapted as a stage play.

The film’s best moments exist in the heavy breaths of silence that exist between Finkel and Longo as each teases out the other’s story of a troubled life and a broken career, pushing each other harder and further toward a confession of guilt.

Like I said, it’s a bizarre and entrancing character drama, but rather than allow the pair's metastasizing, obsessive co-dependence to take center stage, Goold and screenwriter David Kajganich (THE INVASION) are intent on forcibly milking the more prosaic whodunit aspect of the narrative, over-inflating the question of Longo's guilt.

TRUE STORY’s shortcomings  largely come down to its bifurcated portrayal of Mike Finkel. For the sake of the compelling story, he’s an overconfident and dishonest (if well-meaning… but, then again, is he really?) byline-chaser who’s, ultimately, forced to confront the worst aspects of himself in the guise of a potential monster. For the sake of the film, though, he’s also our protagonist, an intrepid movie-of-the-week detective feverishly assembling a deadly jigsaw puzzle.

In wrong-headed service to the latter, Goord uses a taut, keening score, ominous insert shots of Longo’s macabre prison art, and a handful of clumsy red herrings to artificially ratchet up a false sense of imminent danger (a scene in which Longo has a phone conversation with Finkel’s wife is particularly egregious) that seems to promise a thrilling climax or mind-blowing twist  that doesn’t ever – and shouldn’t ever – materialize.

The final piece of the Mike Finkel problem is Hill himself, whose inscrutable, self-serious performance has all the pride, but none of the broken humanity required of the part. Franco, on the other hand, is right at home, imbuing the scruffy, dark-eyed Longo with all the mischievous charm of the fabled scorpion, seeking a helpful frog to carry him across troubled waters.

The combination of Hill’s awkward performance and Goord’s laborious effort to crank out thrills ultimately sabotage the relationship at the film’s core. A fevered montage of a wary Finkel flipping through page after page of Longo’s overly creepy scrawlings, for example, carries a mere shadow of the weight hefted by an actual, leering-eyed scene between the two, and even these moments are noticeably marred by Hill’s day player blandness.

There’s a minimalism to Goord’s visuals – plenty of static shots, many of them close-ups, and all of it capturing the overlit sterility of prison and courtrooms, or the shadowy interior of Finkel’s home – that is, shot for shot, quite beautiful.100 minutes of brooding dialogue later, however, and the snow blind institutional walls and drab domestic interior begin to feel overly sparse and needlessly oppressive.

By the time the film ended, leaving me to contemplate the larger meaning of the title - the way a set of empiric facts are essentially subverted by the introduction of a connecting narrative - I was as intrigued by Finkel and Longo's raw, predatory entanglement as I was disappointed with TRUE STORY’s inability to explore it in any but the most superficial and self-aggrandizing ways.

I wanted to close with some sniping line about the film’s aftertaste that I could tie back into my tortured soda analogy, but then I remembered something Truman Capote once said: “Failure is the condiment that gives success its flavor.” Maybe, then, TRUE STORY is a bit more liked a warmed over bottle of ketchup. (2 out of 4 Stars)