The Zigzag Kid (now on video) 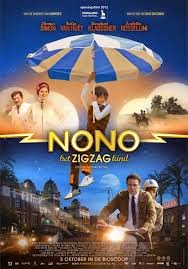 True story: back when I was in high school, a largely introspective always-sitting-alone-at-lunch "grind," I had a hobby on the side of self-taught calligraphy and ink-pen drawing. And one of the top names in the field of pen nibs and calligraphy accessories was Speedball. I possessed a small, much-used Speedball set, a gift from my much-beloved parents, and some nights after homework (which never seemed to end) I'd work on drawing/writing projects.

So one day in the school library, where I had a student job - non-paying, which sort of set the tone for my later career - I remarked to the adult library advisor (not having any friends my own age, of course) something to the effect that I'd be using my Speedball that night.

The guy did a double-take. "WHHHHAT did you say?"

"Speedball. I have a Speedball set," I casually replied.

I am not sure whether giggles were breaking out all around me, but I would not be surprised if they had. For the adult took me aside very carefully to ask more questions about this "Speedball." And finally, when the confusion cleared up (I think), he patiently explained that the word "speedball" had another meaning in modern, hippie-era slang. It referred to heroin use.

So me, the dullest, straightest outcast in Solon High School, at a time in the 1970s when it seemed that even teachers and students alike were getting high under the bleachers by the athletic field, I had just talked in front of all the library community about how I was an intravenous heroin user.

And to think, I didn't even dig jazz music.


I guess it could have been worse. My parents could have given me an ink-pen set from a company that just happened to be named "Gay Child Pornography."

(Then again, I've had trouble landing any sort of job ever since. Perhaps all the high-school Mean Girls who were listening in the library later went into HR and immediately put me on the blacklist due to false perceptions of me as a junkie prodigy. Whereas, with a reputation as a child-sex addict and potential predator with gender-confusion issues, I'd probably satisfy numerous oppressed-minority quotas in the corporate world, with several powerful liberal lobbying groups behind me. I could be running a chain of child beauty pageants and scouting troupes by now - and not even know why)

Which brings us, in circumbendibus fashion, to THE ZIGZAG KID, a 2014 feature now coming to home video, after having been given a showcase slot - a well-deserved one - a few years ago at the Cleveland Jewish Film Fest. It's the best kind of "family" live-action movie, smart and non-condescending. But wait! Isn't there a brand of paper popularly used in rolling marijuana cigarettes called Zig Zag? I would be the last to know (that was why I had no friends or girlfriends). Thus, anyone in the NE Ohio stoner demographic with whom I went to school, who now have adult heroin-addict offspring of their own doing speedballs (and I am not referring to calligraphy) will feel badly misled.

Based on the 2003 novel by David Grossman and Betsy Rosenberg (apparently Mr. Gorssman is a popular Israeli YA novelist, the Hebrew Gary Paulsen, I suppose), THE ZIGZAG KID is a cosmopolitan (very much so, with dialogue as an even mix of English with subtitled Dutch and French), magical-realist children's entertainment whose title refers to Amnon `Nono' Feierberg (Thomas Simon). He's the 13-year-old son of a widowed, famously tough Benelux police inspector (amusing pseudo-TV-cop-show imagery vintage late 20th-century is a fun stylistic gimmick occasionally employed by director Vincent Bal).

When Nona's active imagination gets him into trouble one too many times and he ruins a friend's bar mitzvah with a stunt, he is sent off via railway to a disciplinarian uncle to be straightened out. But a last-minute note reroutes him to a very different mentor - dad's old nemesis, Riviera jewel thief, cat burglar and international master-of-disguise Felix Glick (Burghart Klaubner).

Felix explains that the mission, if Nona will accept it, is to be trained on the lam by a mastermind in techniques of criminal mischief, so the boy can grow up with the insights to be a great lawman like his papa. But, in truth, the inspector didn't sanction any of this at all, and fears that his arch-enemy has kidnapped his son.

In fact, what's going on is a secret agenda to enlighten Nona (days away from his own bar mitzvah) about his mysterious late mother Zohara, and his true family heritage, which heavily involves a beloved cabaret star, Lola Ciprola (Isabella Rossellini), a big vat of chocolate, lightning-bolt-shaped golden talismans, and other fun stuff.

The fleet touch and great cast help through a plotline that treads, somewhat obliquely, on themes of maternal mental illness and suicide, but keeps the darker stuff at arm's length via fantasy. I do envy the kids who might watch this and see Isabella Rossellini for the first time and think this matronly lady would just be the coolest grandma ever (and then they go rent BLUE VELVET on that basis, and I go to jail for corrupting minors).

Good family fun, whether one is Jewish or not. Now, what to do about that band called The Doobie Brothers. You know that name is just going to give the impression that drugs are involved. (3 out of 4 stars)