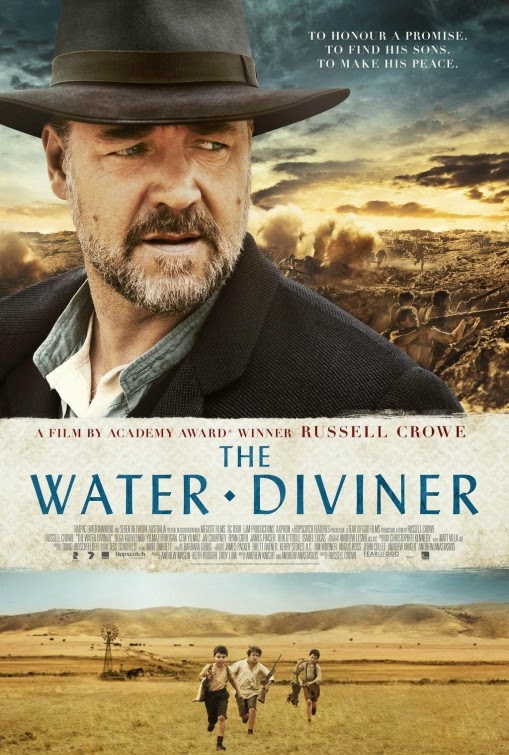 Russell Crowe's film THE WATER DIVINER arrives just in time for the April 25 centenary of Anzac Day, the commemoration of the landing of the ANZAC (Australian and New Zealand Army Corps) forces at Gallipoli, where they battled the Ottoman Empire in World War I. The Gallipoli (or Dardanelles) Campaign, one of the war's bloodiest, cost the lives of nearly a half-million men. The largest number of those killed were Turks, but many thousands were English, French, Australian and New Zealander.


Although it contains a number of spectacularly savage battle scenes, THE WATER DIVINER is a somber historical drama focused not on glory but on loss and sacrifice. Crowe directed from a screenplay by Andrew Anastasios and Andrew Knight and stars as Connor, a taciturn Australian farmer who is a skilled dowser, able to detect with a divining rod the presence of underground water. Finding water is a necessity in his part of the world, where, he explains, it “doesn't rain three or four years sometimes.”

In 1919, four years after the Battle of Gallipoli, Connor returns one day to his humble farmhouse in northwest Victoria after digging a well, to find his wife, Eliza (Jacqueline McKenzie) polishing the muddied boots of one of the couple's three sons, Arthur, Edward and Henry. Eliza exhorts him to read to the boys before bed. Reluctantly, he complies, taking in hand his customary “Tales of the Arabian Nights.”

As he reads aloud from the boys' favorite book, a wider shot reveals that the beds are empty. The boys, who enthusiastically joined the army to fight “for God and country,” are missing and presumed dead. Eliza, half-mad with grief, chides Connor for not finding their sons. “You can find water, but you can't even find your own children.” She drowns herself, and Connor vows at her grave to bring the boys back to be buried beside her.

So it is that Connor embarks on a journey to Turkey to find the bodies of his sons. He's led to a small hotel by the mischievous boy Orhan (Dylan Giorgiades), whose beautiful mother Aysha (Olga Kurylenko) runs the place. Aysha is a war widow who is reluctant to let a room to an Australian, “the enemy.”

Denied a permit by the British consul to travel to Gallipoli, Connor bribes a fisherman to take him there by boat. In Gallipoli, the ANZACs are carrying out the gruesome task of burying the many dead, and civilians are banned from the area. Turkish officer Major Hasan (Yulmaz Erdogan), noting that he's the only father who came looking for his sons, persuades the ANZAC captain to help him with his search. Connor's divining skills lead him to the battlefield site where his sons' bones lie, bearing evidence of execution. Only two sons' bodies are there, however, and Connor learns that Arthur, the eldest, may have been taken prisoner. Connor's journey continues, and he becomes involved in the problems of Aysha, who has not told her son his father is dead, and who is being pressed to marry her stern brother-in-law, Omer.


Crowe gives a nice, quietly emotional performance in a story interwoven with flashbacks of the boys' adventurous youth and harrowing battle scenes, rendered with arresting, amber-hued cinematography by Andrew Lesnie. The scenes depicting the young brothers' death throes on the battlefield is particularly unforgettable. The film has the quality of a fable, so it's perhaps forgivable that it indulges in some hoary tropes (the clever “Gunga Din” boy, the beautiful war widow) and outlandish Indiana Jones-style heroics involving a cricket bat.

It would have been nice, I think, if the writers had given more substance to Connor's divining ability. This rare talent helps him find his sons and should have been, considering the film's title, a bigger part of the story. I was reminded of the renowned Dutch clairvoyant Marinus Dykshoorn, who used a divining rod to help authorities locate numerous missing bodies.


The film has been embraced in Turkey, in part because of its even-handed treatment of the historic events and its sympathetic view of Turks as victims of ill-fated Western machinations. 3 out of 4 stars.