[THE MAN FROM RENO opens in Cleveland on Friday May 24th exclusively at the Capitol Theatre.]

*Note: seeing as it can be near impossible to talk meaningfully about some films without what some might consider SPOILERS, consider this your warning.* 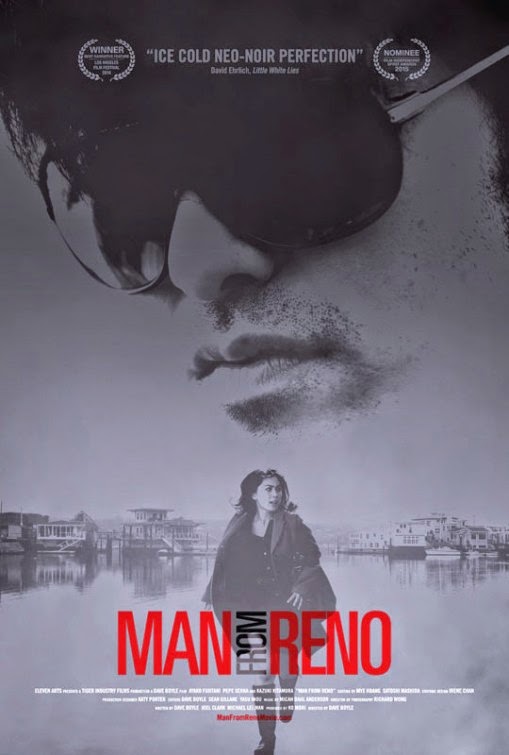 Small town sheriff Paul Del Moral (Pepe Serna) accidentally hits a Japanese man with his car while driving along a foggy road. There's something fishy about the accident victim, but before he can be questioned he vanishes from his hospital room. Meanwhile, bestselling Japanese mystery writer Aki (Ayako Fujitani) ditches her press tour without telling anyone where she is going and travels to San Francisco, feeding speculations that she has disappeared (shades of Agatha Christie). At her hotel Aki meets a mysterious Japanese man (Kazuki Kitamura) who seduces her, only to (you guessed it) go missing himself. What the heck is going on?

In many ways THE MAN FROM RENO is a standard potboiler, with the cliched characters of the quirky small town sheriff and the “mystery writer playing detective in real life” teaming up to solve a crime. The mystery in is a complex and twisty one, and while technically it does get solved, it only leads to another mystery that is still left hanging when the film concludes. Also left just sort of hanging there are subplots involving the Sheriff's daughter and an old friend of Aki's.

The performances are first rate, with the two leads imbuing what could have been stock characters with genuine personalities. No complaints about Dave Boyle's subtle direction, either, which compels viewers to stick around for the whole ride even though it's a bit more leisurely paced than your average Hollywood suspense/thriller.

Still, it's hard to shake the feeling of, “is that all there is,” once the film reaches its conclusion. It's almost as if we've been watching THE TALENTED MR. RIPLEY told not through Ripley's viewpoint, but through the eyes of his victims, which leaves us with an incomplete picture. It's a bit frustrating, but there's enough about the film that's riveting that it almost doesn't matter. Almost. 2 ½ out of 4 stars.