[THE HAPPENING screens Saturday May 2nd at the Cedar Lee Theatre as part of 12 Hours of Terrible.] 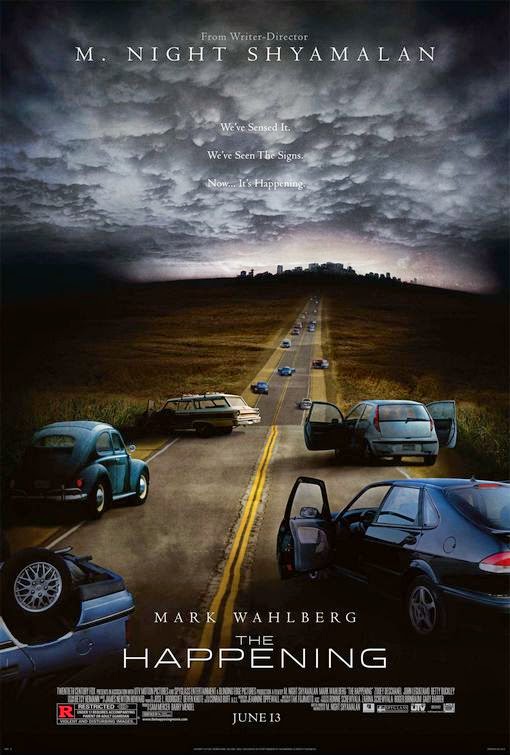 M. Night Syamalan’s THE HAPPENING is sort of a modern version of those seventies “nature gone amok” movies like KINGDOM OF THE SPIDERS and DAY OF THE ANIMALS. The difference is those movies knew they were cheese, so they didn’t take themselves too seriously. They hired scenery chewing hams like William Shatner and Leslie Nielsen to star, kept the budgets low and, while still getting their ecological messages across, had fun. Unfortunately M. Night Shyamalan doesn’t realize how painfully silly his screenplay about killer trees is, so he treats this material with the same air of funereal seriousness as all his other films.

This movie has so many problems I don’t even know where to begin. For starters, the dialog sounds like it was written by someone who has never actually listened to other people have a conversation. The story is littered with irrelevant subplots like the guy at work Alma (Zooey Deschanel) had a slice of tiramisu with and neglected to tell hubby Eliot (Mark Wahlberg) about. A fair amount of time is spent on this little diversion, and I guess it’s supposed to pass for character development, but it just comes across as inane. Most of the actors avoid embarrassing themselves too much despite the clunky dialog and poorly conceived characters they’ve been given, but Zooey Deschanel’s performance is strictly amateur night and at times outright laughable.

In various interviews writer/director Shyamalan has given about THE HAPPENING, much has been made of the fact that this is his first ‘R’ rated movie. Bad idea. The one or two scenes that do have ‘R’ level gore in them just feel like they’re calling attention to themselves. And it’s obvious that Shyamalan isn’t comfortable with this kind of graphic horror. But even the more subtle scares he normally excels at fall flat here. I guess it ain’t easy trying to make pollen scary. Maybe that’s why for the movie’s third act, when the surviving characters come across a house inhabited by Mrs. Jones (Betty Buckley), it’s like THE HAPPENING turns into a completely different (though no less terrible) movie.

I also hate that Mark Wahlberg’s character is supposed to be a science teacher, yet routinely makes blatantly unscientific comments like, “Science will come up with some reason to put in the books, but in the end it'll be just a theory.” I wouldn’t care nearly as much if it weren’t for the fact that this movie seems like it wants to be a serious ecology lesson, something that it most definitely is not qualified to be. But hey, most people aren’t going to care about the scientific accuracy of this movie. All they want out of THE HAPPENING is a good, thrilling bit of scary entertainment and, bottom line, this just doesn’t deliver. 1 out of 4 stars.
Posted by Bob Ignizio at 12:00 AM