Spring (April 18th and 22nd at the Capitol Theatre) 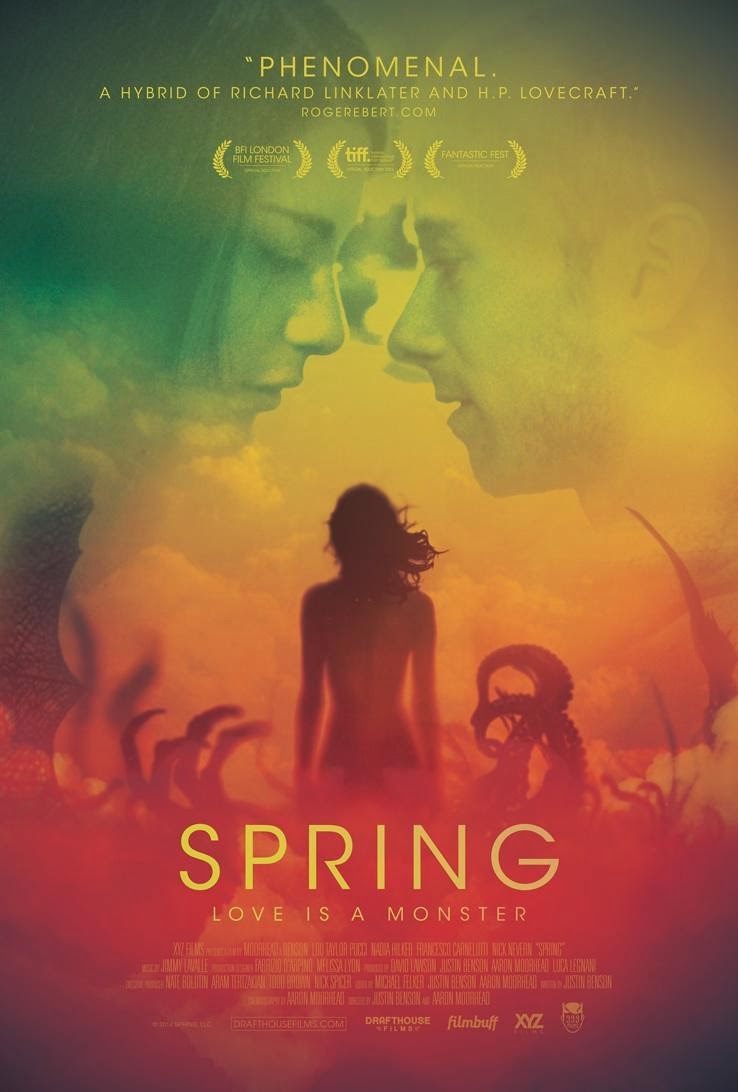 One can see why filmmaker Richard Linklatter liked SPRING so much: in many ways, it's a lot like his own BEFORE SUNRISE. Both films are nearly plotless romances in which an average American guy and a beautiful European woman meet and fall in love while on holiday. The couples then spend most of their respective movies primarily engaged in conversation. The key difference in SPRING is that its female lead, Louise (Nadia Hilker), turns out to be an immortal shape shifter who occasionally loses control and kills people, a fact she wants to keep secret from her would-be boyfriend Evan (Lou Taylor Pucci).

To an extent I appreciate what co-directors Justin Benson and Aaron Moorehead are trying to do here by avoiding the usual methods of building suspense and generating atmosphere used by most horror films. It's a kind of matter of fact, “natural” approach to horror that isn't interested in jump scares, or frankly much in the way of scares, period, although it does aim to unsettle. In that regard, parts of it work quite well. However, the film is far less successful in avoiding the cliches of the romance genre. And since SPRING is much more of a romance than a horror film, that's kind of a big problem.

Evan is a slacker dude with not a lot going on – at least nothing good; he does have the cops back home looking for him – who has a sexually ravenous supermodel/genius immediately offer herself up to him. Maybe this has happened to someone somewhere at some time, but frankly the whole immortal monster thing seems more believable. And sure, I get it that such is the way vampires, succubi, and the like operate. But Louise actually falls in love with the guy despite his near total lack of personality. What is a 2000 year old immortal genius going to talk about with a twenty something bro? A whole lot of nothing, as it turns out, which isn't good given that most of the film consists of them talking.

SPRING further alienates with drab, washed out cinematography looks as if it was shot through a filter best described as “bad instagram”. Never has Italy looked less appealing. The frequent shots of various insects, arachnids, and sea life that pop up throughout the film as a kind of foreshadowing also don't work, feeling on the nose and heavy handed.

And then there are the attempts to explain Louise's condition. She talks at great length about how she's a creature of science, not magic, but her scientific explanations are about on par with the exposition in some schlocky fifties sci-fi flick. Not to mention it has little bearing on anything pertinent to the plot.

Really, though, my main issue with the film is that it's so damn boring. There's probably a good thirty minute TV episode here, but as a feature it's tedious. If only “Monsters” were still on the air. 2 out of 4 stars.