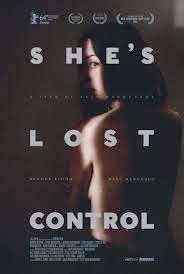 If there is a lesson to be taken from SHE'S LOST CONTROL, it's that sex surrogate work is no way to make a living, at least not as practiced by Ronah, the woman at the center of this downbeat indie drama written and directed by Anja Marquandt. This film's view of surrogacy is far less friendly than that in THE SESSIONS, the 2012 movie starring Helen Hunt.

Ronah, who lives alone in Manhattan, is a graduate student in behavioral psychology. She works with clients suffering from “intimacy issues,” who are referred to her by a psychologist, Dr. Cassidy (Dennis Boutsikaris). Evidently Dr. Cassidy's screening process is not that meticulous, because in addition to some nice clients, he refers to her Johnny Hayes, a blond, bearded hospital worker who is reluctant to even speak to Ronah. He has issues with women, and is burdened by caring for his wheelchair-bound sister. Ronah, a consummate (as it were) professional, believes she needs only to draw Johnny out, though anyone watching would tell her to run, immediately, away from this sinister chap. But Ronah is proud and idealistic. “I got it, I can handle it,” she tells Dr. Cassidy. “I don't want to give up on him.”

Ronah proceeds with a program of regular sex with Johnny, and professional boundaries begin to dissolve. He develops feelings for her, both affectionate and hostile, and she grows fond of him, for reasons we don't fully understand. Ronah's settled, solitary life begins to unravel: she's being sued by her landlord over a plumbing issue; her brother phones to blame her for not attending to a parent's illness; she gets several hang-up calls and begins to feel vulnerable.

The film deftly contrasts the contrived intimacy of Ronah's professional liaisons with the drab loneliness of her daily life. Tired of cooking for one, she implores a neighbor one night to eat with her. She is having her eggs frozen "in case I want to have a baby someday," and contemplates buying an apartment. But, as cracks appear in her confident facade, she may be reconsidering her career choice. Or maybe not; the film is allusive, not direct, leaving the viewer to determine her state of mind.


Moody cinematography by Zack Galler, who has a penchant for long-lensed views of people walking away, and affecting music by Simon Taufique emphasize the alienation of a young woman struggling to feel secure in a heartless urban environment, and plying a trade that, while not prostitution, carries many of the same hazards. Taking its title from a memorable Joy Division song, the film is ponderously paced, so that a climactic episode of violence, though alarming, comes as something of a relief. Brooke Bloome delivers a subtle, convincing performance as Ronah, and Marc Menchaca is aptly opaque as Johnny. 2 1/2 out of 4 stars.
Posted by Pamela Zoslov at 12:00 AM