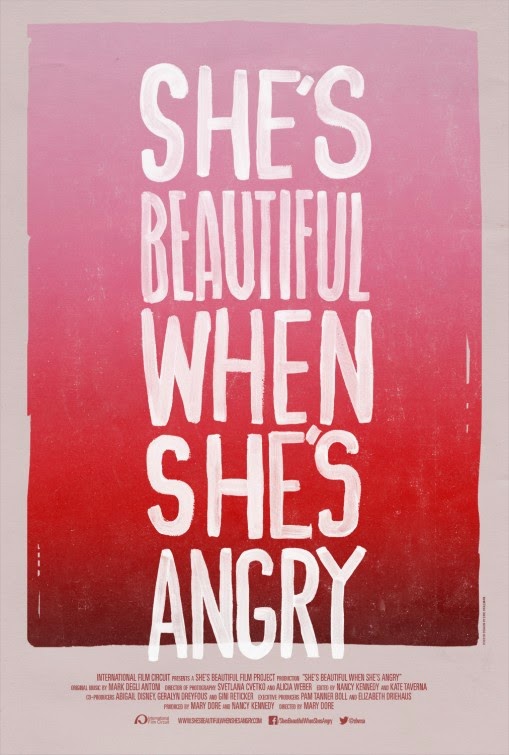 Near the end of SHE'S BEAUTIFUL WHEN SHE'S ANGRY, noted feminist Susan Brownmiller nicely sums up something I was feeling while watching the film: “We live in a country that doesn't credit any of its radical movements. They don't like to admit in the United States that change happens because radicals force it.” That certainly seems to have happened with regards to the history of the women's rights movement.

When I was in school, we learned a few token factoids about Susan B. Anthony, and that women got the right to vote in 1920. As far as my history and social studies classes were concerned, that was the end of the story when it came to the women's liberation movement. But as SHE'S BEAUTIFUL WHEN SHE'S ANGRY shows, there's far more to it than that.

SHE'S BEAUTIFUL is not intended as a comprehensive history of the American women's movement in its totality. Rather, it covers the important formative years of 1966 to 1971, beginning with the founding of NOW (National Organization for Women). From there the film follows the various other groups that sprang up in its wake. Some, like W.I.T.C.H. (Women's International Conspiracy from Hell) were in the Yippie mold whose protests were a sort of performance art. Other factions sprung up over feelings (not entirely unjustified) that the mainline feminist groups didn't adequately address the issues facing black women, lesbians, and other minorities.

It's to the film's credit that it doesn't shy away from showing these divisions, or from pointing out other areas where the movement may have made missteps. More than one activist looking back with the perspective granted by age expresses regrets over certain actions and laments occasions when segments of the movement were too ideologically rigid. We also get to see a fair sampling of public opinion about the movement at the time. Some are supportive, others ugly and piggish. Some women even express their belief that a woman's place is, indeed, in the home.

Aside from the protests and other attempts to influence public policy, one of the most notable accomplishments of the early feminist movement was the publication of “Our Bodies, Ourselves”. Written collectively, it provided the kind of information about women's health and anatomy that up until that time was not widely available to the general public. And then there are the efforts that failed, like the attempt to set up a national daycare system. Congress passed the bill, but not with enough votes to overcome Nixon's veto.

The usual mix of archival footage, photographs, modern day interviews, and narration is assembled by director Mary Dore in a way that is both entertaining and informative. Yes, it has an agenda, but as mentioned elsewhere in this review, it's far from a being just some glowing puff piece. Rather, it's a first rate documentary that both educates and inspires. 4 out of 4 stars.
Posted by Bob Ignizio at 2:54 PM