Seymour: An Introduction (opens in Cleveland April 10th at the Cedar Lee Theatre)

[SEYMOUR: AN INTRODUCTION opens in Cleveland on Friday April 10th exclusively at the Cedar Lee Theatre.] 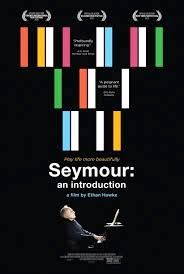 An NPR radio show (yes, I listen, even though the local affiliate ignores my job applications) pretty much said nearly everything I wanted to say about SEYMOUR: AN INTRODUCTION, at least as regards the documentary's director, actor-author-filmmaker Ethan Hawke. It seems that most of the intelligentsia scoff at Mr. Hawke's creative efforts outside of just being a sub-Brat Pack-actor pretty face in cop-action movies. Laughed him off as a pretentious wannabe smartypants. Whereas James Franco, for some reason, is universally praised for doing the same cross-platform art-performance-life schtick. What gives?

Had I worked for NPR (had WCPN accepted my job application), I'd posit simply that playing the Green Goblin Jr. in a Spider-Man movie goes a long way to scoring points with the 21st-century's cultural tastemakers, and Mr. Hawke came up short compared to Franco in that regard. Either that or NYC editors and opinion leaders, having a mentality not unlike that of your average high-school Mean Girl (I know Cleveland's editors and opinion leaders are that way), took Uma Thurman's side in her breakup with Hawke; after all, which one of them sold more Vanity Fair covers?

Mr. Hawke can still redeem himself, of course. If his agent's good, he'll be cast as "Hawkeman" in that Justice League movie that never quite gets off the ground. Meanwhile, for those few of
you inclined to grownup stuff, there's SEYMOUR: AN INTRODUCTION.

I didn't get it until NPR said so (superhero comics must have rotted my brain too), but the title is a play on the name of a well-known J.D. Salinger short story. Okay, whatever; the feature is a slickly produced documentary on a venerable New Yorker whom Hawke sees as a sort of an artistic mentor-figure - or at least, what an artistic mentor-figure would be, in a better world.

Now in his 80s, Seymour Bernstein was a classical pianist who arose out of a non-musical, apparently unappreciative family, to become a musician of some renown. But at age 50 he abruptly played an unannounced farewell gig at a NYC YMCA, then retreated to a simple life out of the spotlight as a respected piano teacher (and a composer, mostly of etudes).

Here Bernstein, the soft-spoken sort of New Yorker who could give New Yorkers a good name, explains his life choices and philosophy. True, he partially retired due to crippling stage fright and self-doubt. But he also fears the corrosive effects of artistic celebrity, creating a heartbreaking thin line between being creatively brilliant and being an utter bastard.

"There are a examples of extremely talented and extremely selfish, horrible people...There are musicians who are monsters."

Yes, I had to write that down. You go, Seymour Bernstein! I've been thinking that sort of thing for years, but just had to hear it from a respected arts insider. When it comes to naming names, the worthy Bernstein (and some impish re-enactments courtesy Hawke) cites Brando, Pollock and, of all people, tic-ridden pianist Glenn Gould, whose neuroses, Bernstein thinks, were more akin to affectations Gould used to call attention to himself.

(Even so, I wish he'd chosen another example of Artists Behaving Badly besides cult-hero Gould, who, like Bernstein, curiously, also retired from public performance without warning, at his peak, albeit for different reasons (making one wonder if that wasn't another calculated bid for attention, the way the abovementioned J.D. Salinger was accused when he became a recluse (I never became a musician or performed, so maybe I can just bill myself as the ultimate "alternative" singer-songwriter. So cool that I quit before I started. Bring on my millions in royalties! My statue outside the Rock Hall! My bloody, broken and brutalized groupies! I'll try to be the worst person possible, if that's what the fans and adoring critics expect.)))

Anyway, having stepped away from an illustrious career, Bernstein has been content to live in the same one-bedroom apartment with his Steinway for more than half a century. Here he taught generations of aspiring young keyboard maestros with gentle focus, emphasizing the hard work, dedication and focused concentration it takes to make everything look so effortless and not doing anybody any harm.

Which, as per Ethan Hawke, sums up a good blueprint for life, no matter what creative expression you're into - although music fans, especially those leaning towards the 88 keys, and even more so, Franz Schubert, are probably the best audience for SEYMOUR: AN INTRODUCTION. Hawke also apparently engineers Bernstein's return to live performance, with the man's first public recital in 35 years, at Steinway Hall. Which may be a bit of grandstanding, in a movie that dares to portray an artistic type as modest in the extreme. But I hope I can forgive that, if Mr. Bernstein can.

UPDATE: Following his concert performance, Seymour Bernstein went beserk over his renewed acclaim, and binged on crack cocaine, ecstasy and meth. He tweeted racist slurs against Michiko Uchida (and they weren't even the accurate racist slurs). He trashed several hotels - not just his rooms; the entire buildings - from Atlantic City to Las Vegas, married and divorced Nadja Salerno-Sonnenberg in three hours, nearly killed Itzhak Perlman while street drag-racing, and crashed the Grammys in a bourbon-fueled haze, trying to take away Beck's award and giving it to P.D.Q. Bach instead. When one terrified woman cried out, "Why are you doing this," he roared back "Because I'm Seymour @#!ing Bernstein, that's why! I've even got my own documentary!" And burned her to a cinder with his radioactive breath. Okay, just kidding about all that. But still, it would just prove his point. (3 out of 4 stars)