Sagrada: The Mystery of Creation (April 9th and 11th at the Cleveland Cinematheque)


[SAGRADA: THE MYSTERY OF CREATION screens Thursday April 9th at 8:45 pm and Saturday April 11th at 7:30 pm at the Cleveland Cinematheque.] 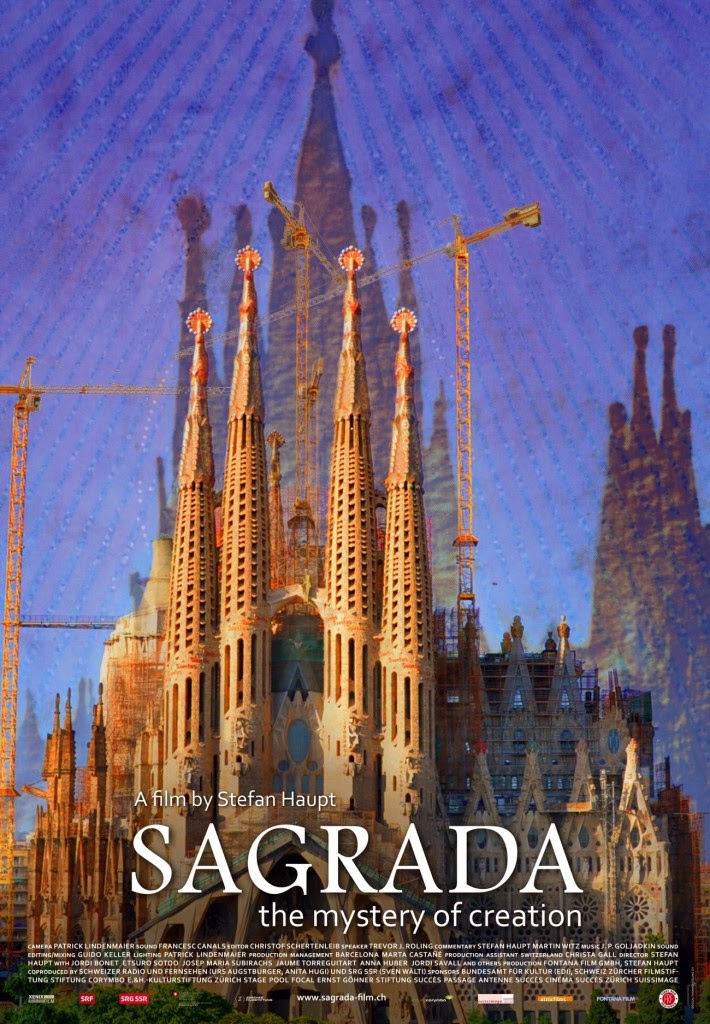 There's an arts documentary that seemed to be in heavy rotation in University Circle a while back that I just didn't quite dig, Japanese filmmaker Hiroshi Teshigara's ANTONIO GAUDI, a highly impressionistic, non-narrative 1984 tour of Barcelona and the organic-like wonders in stone wrought by legendary Catalan architect Antonio Gaudi. The picture provided no narration or real clues about Gaudi's biography, but was all mood, texture and ambiance of that particular `Catalan' region of Spain, with a rather weird soundtrack by Far East composer Toru Takemitsu.

If I am not mistaken, the Japanese in particular seem gaga for Gaudi, second only to the Catalonians themselves, for whom he is a patriotic icon of their province. Myself, I would have liked a bit more history lesson.

That is provided by Swiss filmmaker Stefan Haupt's 2012 docu-feature SAGRADA: THE MYSTERY OF CREATION. While not utterly PBS in the presentation, it is a far more prosaic look at Gaudi's principle masterwork, the one that basically occupied all his professional life - the still unfinished Sagrada Familia basilica in Barcelona.


Construction began on the Catholic church in 1882, but halted when the first architect left due to creative differences. The 31-year-old, relatively unknown Antonio Gaudi was commissioned to continue the work.

Gaudi, inspired by the surrounding countryside, radically revamped the design, with undulating, curving surfaces and an impossibly ambitious cluster of towers. Only the crypt was completed when the project ran low on money, and progress in construction proceeded in halting fashion, Gaudi sometimes going door-to-door begging for donations (NOTE TO ASPIRING FILMMAKERS: your career and cinematic projects could be like this, best get out while you still can and learn a marketable trade). When a streetcar struck Gaudi in 1926, he was mistaken for an old tramp and taken to a hospital for the poor (rather sounds like Spain in 1926 had a better health-care system than the USA in 2015) until a personal assistant identified the great architect and had him transferred to a more upscale facility, where Gaudi died three days later (you film students should still quit while you still have time).

Gaudi knew that work on Sagrada Familia would not be completed in his lifetime, but he anticipated that other would go by his drawings and extremely detailed wooden model. But all those were destroyed in the ruinous Spanish Civil War, and dictator Francisco Franco crushed Catalan nationalism (of whom Gaudi's art was a key cultural component). By the time work resumed on the church, it was so controversial that a bunch of European master builders signed a petition that the church should remain an unfinished shell, rather than compromise Gaudi's singular vision. One of those signatories, the UK's David McKay, is interviewed here. He thinks the continuing work on the church, accelerated in recent years, is more "Disneyland" than the real Gaudi.

Indeed, the whole edifice seems to have morphed into a collaborative public-art project with a lots of divers hands involved. An agnostic Catalan sculptor contributed a controversial, angular nude Jesus to the façade. Also on board with his more traditional religious statuary: Japan's Etsuro Sotoo, a convert from Buddhism to Catholicism, who has recommended that Gaudi be considered for literal sainthood. Well, there are worse things Japanese can be doing (I'm binge-watching the anime SPACE DANDY right now, just to earn a measly 20 bucks).

Computer projections have replaced Gaudi's priceless, long-gone wooden models, poured concrete has taken the place of Gaudi's painstakingly worked stone. With visits by Pope Benedict and an entire family of architects named Bonet guding, construction is continuing at full steam. Still, nobody in Barcelona seems to have a solid completion date in mind.

I wish the picture would have brought up the point that other great cathedrals, such as Notre Dame de Paris, literally took centuries to build. Lifetimes of construction on those houses of God continued through mankind's pitiful little wars, games of thrones, and regime changes. In that sense, the long, strange story of the Sagrada Familia, whose creator stated that God need not be rushed, is not so unique after all. But nobody asked me. (3 out of 4 stars)