[WHITE GOD opens in Cleveland on Friday May 1st exclusively at the Cedar Lee Theatre.] 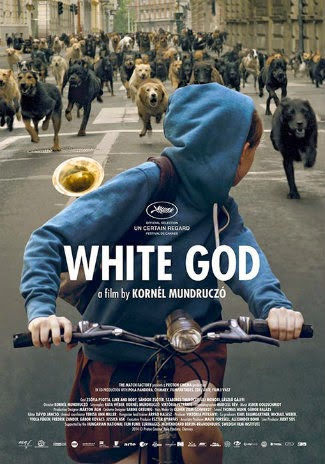 Like an arthouse version of one of those seventies “nature run amok” horror films like DAY OF THE ANIMALS, WHITE GOD is, on its surface, about a pack of mongrel dogs who indeed have their day. The plot concerns a young girl, Lili (Zsófia Psotta), who is forced by circumstance to spend three months with her father while her mother goes on a work trip. Lili brings along her mixed breed dog Hagen, which dad (Sándor Zsótér) isn't thrilled about to begin with. He's even less thrilled when he learns he has to pay a special “mongrel tax” to keep the animal, something he flat out refuses to do. He plans to take the dog to a shelter, but when Lili behaves defiantly he winds up simply letting the dog loose in the middle of the city.

Although we continue to check in with Lili as she looks for her pet and has to cope not only with her thorny parental relationship, but with a harsh music teacher, as well, much of the film is from Hagen's point of view. Trusting towards humans at first, he quickly learns that not all of mankind is as loving and respectful as his former owner. Eventually he finds other canine companions on the streets, where he shows his planning and leadership skills in procuring food from a local butcher. It kind of reminds one of Caesar's rise in the PLANET OF THE APES films. It's a given that the film has to reunite Hagen and Lili eventually; the question is, will the reunion be a happy one?

One could argue that it's the film's subtext, about marginalized groups eventually having enough and striking back at their persecutors, that makes WHITE GOD a more serious film than those seventies horror flicks I mentioned earlier. But really, all those films were rife with subtext as well – usually some environmental issue, just the sort of thing that readily lends itself to a movie about mutant bears or giant killer rabbits.

The real differences are in two areas. First, WHITE GOD is considerably better made and acted than your average quickie drive-in shocker. Second, it sort of downplays the action/horror aspects of its story, saving them for the last act and, even then, not really dwelling on the animal attacks (although those sensitive about seeing scenes of animals being harmed in a movie, no matter how fake, may still wish to skip this one).

The result is that WHITE GOD plays more like a drama with fantastic/horrific elements than a horror film trying to slip in a little social commentary. Personally I'm good with either approach, but it's fair to say that on average, the audience for something like this isn't going to be quite the same as the one for FROGS or NIGHT OF THE LEPUS.

The canine performers in WHITE GOD won the “Palm Dog” award at the 2014 Cannes film festival for best cinematic dog(s), and do indeed turn in award-worthy performances. The human cast is quite good, too. The film itself won the “Un Certain Regard” award at Cannes, and was submitted by Hungary for this past year's “Best Foreign Language Film” Academy Award (it didn't make the final 5). While WHITE GOD is a fine film, it drags a bit at times and doesn't make as strong a statement as its sense of seriousness would lead one to expect. Still, it's well worth checking out regardless of whether you're a horror fan looking for something classy, or world cinema aficionado looking for something that delivers a few thrills. 3 out of 4 stars.