Repost: Drive Angry (May 2nd at the Cedar Lee Theatre as part of 12 Hours of Terrible)

[DRIVE ANGRY screens Saturday May 2nd at the Cedar Lee Theatre as part of 12 Hours of Terrible.] 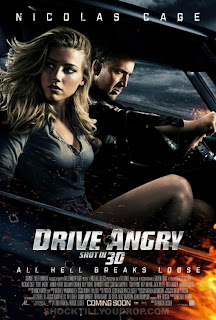 Start with a simple premise. For example, Nicholas Cage escapes from Hell and teams up with a bad-ass babe (Amber Heard) to save his granddaughter from being sacrificed by a Satanic cult led by the man (Billy Burke) who killed his daughter, all while trying to elude a demonic bounty hunter (William Fichtner). You don't have to flesh out every aspect of your characters' back story or bog things down with pointless mythology. Just give us engaging characters and cast the roles well, right down to the bit players who only get one or two scenes.

Have your action sequences well thought out, and hire top notch stunt people and effects technicians to make sure the ideas are realized properly. Don't hop on the fast editing/shaky camera bandwagon. Shoot the scenes in such a way that the audience can actually tell whats going on and appreciate all that hard work. Use CGI when you have to, but whenever possible use practical effects. Don't aim for cheap, campy nostalgia, but don't take yourself too seriously, either. And deliver the goods: blood, car chases, gun fights, fist fights, explosions, and gratuitous nudity.  If that sounds like a pretty good recipe for making an action movie to you, then chances are you'll enjoy DRIVE ANGRY.


Nicholas Cage has fun with his role, but stops short of giving one of his trademark over the top performances. He understands that this material is ridiculous enough as-is that the best course of action is to play it fairly straight. Amber Heard also does a great job playing a girl who can hold her own against gun toting Satanic cultists while looking pretty good in a pair of Daisy Dukes. It's Fichtner, though, who almost steals the show as Hell's accountant. Also be on the look out for genre fave Tom Atkins as an unconventional law officer.

Director/co-writer/co-editor Patrick Lusier previously showed he had the skills necessary to make a satisfying modern day drive-in movie with his remake of MY BLOODY VALENTINE in 2009. Here, he easily tops himself while working in slightly more original territory. The screenplay is a bit ragged around the edges in spots, and there's a bit of flab in the film's hour and forty-five minute running time. A lean, mean 80 to 90 minutes tends to work best for this kind of thing. But Lusier directs with such confidence and enthusiasm, and the film's cast all respond in kind, that any shortcomings only mildly interfere with one's enjoyment.

Lusier also shows once again that he actually knows how to use 3D in a live action movie. No, he doesn't go for the completely immersive feel of James Cameron's AVATAR. He just uses the technology as the gimmick it is to get a rise out of the audience. That said, I'd probably have been just as happy to see this film flat. Preferably at a drive-in on a double bill with something equally trashy and fun. A very solid 3 out of 4 stars.