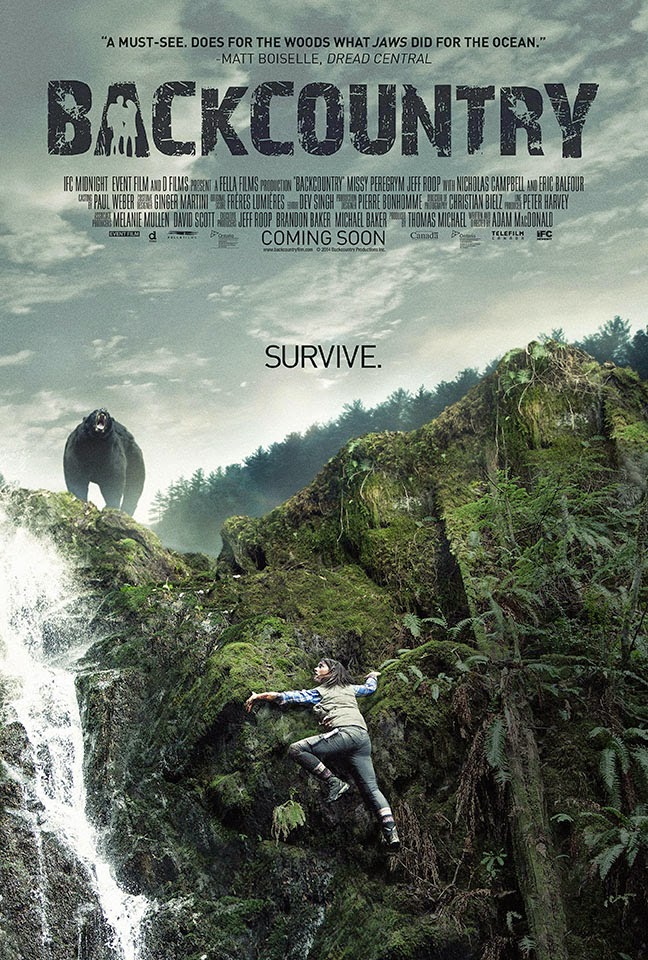 In an abstract sense I like the idea that bears exist in the wild; I just don't particularly want to encounter one on my next nature hike. It's fairly certain I'm not alone in this regard, which is why BACKCOUNTRY, a new minimalist horror film about a couple whose camping trip is violently interrupted by an ursine intruder, is sure to resonate with a fairly wide audience.

There isn't so much a plot as a premise: Alex (Jeff Roop) and his girlfriend Jenn (Missy Peregrym) are spending a weekend at a park Alex is familiar with from numerous earlier visits. It's been a few years, and parts of the park are now closed off to campers, but Alex still feels confident enough to refuse the map offered by the park ranger. He's also so concerned about Jenn being on her cell phone the whole time that he stashes it in the car, unbeknownst to her.

The two enjoy the beauty of nature and each other's company until Brad (Eric Balfour) shows up and starts exuding his own alpha male attitude. When Brad offers to help guide the couple through the woods, it's clear that it's meant to undercut Alex' masculinity, and it does.

Leaving Brad behind, Alex and Jenn continue on their trip, and writer/director Adam MacDonald keeps ratcheting up the suspense and tension until it's almost un-bear-able (sorry, couldn't help myself). Is Brad going to show up again and go all backwoods psycho? Is Alex going to get them completely lost? And wait, isn't this movie supposed to be about a killer bear?

Where the film comes up a little short is in the plotting. What little there is feels very much by the numbers. It's nice for a movie to actually take some time to let us get to know its characters before putting them through the ringer, but for all the time we spend with them, neither Alex or Jess ever really comes across as particularly interesting. Don't get me wrong, I wasn't rooting for the bear, but between Jenn's blandness and Alex' quietly paternalistic douchebaggery, I can't say I found either of the leads all that interesting or likeable.

But hey, this is a horror film. It's not like the campers in any given FRIDAY THE 13TH installment make that much of an impression, either. This is a director's medium, and MacDonald knows how to work the slow burn build up. It's not great, but it's effective enough to be good. 3 out of 4 stars.
Posted by Bob Ignizio at 3:14 PM