Marfa Girl (May 3rd at the Cleveland Cinematheque)

[MARFA GIRL screens Sunday May 3rd at 8:10 pm at the Cleveland Institute of Art Cinematheque] 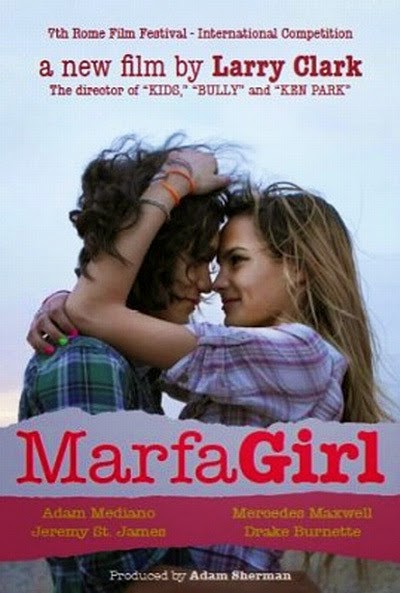 “It’s O.K.,” the Dead Moon song heard over the closing credits of Larry Clark’s MARFA GIRL, might as well be speaking directly to the KIDS auteur himself, particularly during its “We’ve all seen better days” refrain. Being a longtime fan of Clark’s work as both photographer (“Tulsa”) and film director (the Harmony Korine-scripted KIDS, ANOTHER DAY IN PARADISE, BULLY), his creative and artistic desperation/disintegration over the past decade has been depressing to watch. Apparently Clark has taken another song lyric—Neil Young’s immortal “it’s better to burn out than to fade away” from “Hey Hey My Way (Into the Black)”—as his credo, and that’s just plain sad.

I’m no shrink, but Clark’s artistic fallout seems to have been triggered by the vituperative critical reaction accorded 2004’s KEN PARK, the first of Clark’s sexually provocative films to actually cross over into hardcore terrain. As a PARK defender (I think it’s an often brilliant work marred by some weak performances), I can sympathize. But pity can only take you so far.

After WASSUP ROCKERS (2005) and MARFA GIRL (made in 2012, but just now being released), I’m beginning to think that Clark is entirely bereft of any fresh ideas. Or maybe that he simply stopped caring. At its weakest (which, sadly, is much of the time), MARFA GIRL reminded me of a bad Henry Jaglom movie—meandering, slackly paced, “distinguished” only by some truly dreadful, amateur-caliber acting—with a few explicit (NC-17 vs. XXX) sex scenes tacked on. It is, however, much better shot than the average Jaglom joint. Say what you will about Clark’s depleted directing skills, but his eye remains as sharp and poetic as ever. (David Newbert did the handsome cinematography.)

Set in the dusty, real-life West Texas town that gives the film half of its title, the minimalist narrative mostly revolves around 16-year-old slacker/skater boy Adam (distinctly unpromising screen newcomer Adam Mediano) who smokes a lot of weed, has sex whenever (and with whomever) he feels, and routinely gets hassled by a Border Patrol cop (Jeremy St. James, flailing) suffering from some, uh, issues of his own.

The other major recurring figure is never even given an official name. I guess she’s supposed to be MARFA GIRL, although the character isn’t a Marfa native and more of a young woman than a girl. She’s purportedly an artist (really?) in town for a fellowship at Donald Judd’s prestigious Chinati Foundation. Played by Drake Burnette who evinces all of the thesping skills of a 1970’s porn starlet (think C.J. Laing crossed with Annette Haven), Marfa Girl loves talking about sex—that is when she’s not bedding every available Hispanic male in sight. (M.G. has a proudly acknowledged fetish for Latin men/boys.) She also seems to get high even more frequently than Adam, probably because M.G. has a larger disposable income. But then just about everyone in Marfa spends the majority of their waking hours toking and screwing, so maybe she’s just trying to blend in.

Marfa Girl’s most annoying habit, though, is lecturing everyone within earshot, Border Patrol agents especially, about race and immigration in the most simplistic, MSNBC-bloviators-on-Ambien fashion. If that was Clark’s bid to make his film seem “topical,” he doesn’t have anything particularly salient or newsworthy to say about either hot button topic.

While watching MARFA GIRL, I was reminded of critic John Grierson’s snarky comment (“When a director dies, he becomes a cinematographer”) about Josef von Sternberg’s later films. In Clark’s case, his (artistic) demise has turned him into a blue-balled pornographer instead. 2 out of 4 stars.
Posted by Milan Paurich at 12:00 AM