Hard to Be a God (April 16th and 19th. at the Cleveland Cinematheque) 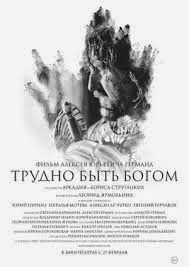 HARD TO BE A GOD is actually based on a 1964 novel by the great Russian science-fiction writers, the Brothers Strugatsky, Arkady and Boris, whose very readable literature inspired other filmmakers behind the Iron Curtain, notably Tarkovsky with STALKER. I liked the book better, frankly.

Hard to be a God, for those of you I can try to persuade to read, is a classic of the theme made famous here in the West by Star Trek. It's the notion of the Prime Directive - that if advanced Earthmen were to secretly observe another, primitive culture, ethical codes would mandate they not actively intervene in any way.

(Or, in my case, would prevent anyone from outer space, no matter how benevolent, from beaming me up out of here, into their mighty starship, where there might actually be job opportunities. Sorry, I think a lot about that).

In the novel, cosmonaut-scientists from a peaceful future Earth (the authors are generally apolitical, but I dug the hint that Russkies sorted everything out after winning one final, apocalyptic war against Germany) are undercover on a distant planet where a native human-like civilization seems mired in the 1200s. Masquerading as noblemen "dons," the space guys are supposed to watch and record dispassionately through their cameras-disguised-as-jewelry, as this land experiences a renaissance and evolves towards enlightenment. But, thanks to the arbitrary violence of the local bloodthirsty tyrant and a Taliban-like religious order, that renaissance never seems to happen (remind you of any cities hereabouts?). As the planet's leading inventors, writers and thinkers go to their deaths, one of the extraterrestrial scientists finally can't take it anymore...

I don't know the Soviet-era bestseller charts well, but HARD TO BE A GOD was popular enough that a feature film was done with great fanfare in 1989 as a détente collaboration between the Soviets and West Germany. That was a Lucas/Spielberg-influenced decade, you internet kids won't remember at all, when Hollywood sought to make big bucks by plunging deep into blockbuster sci-fi, on a level never done before. It made life somewhat more interesting to lonely, girlfriendless readers of fantasy such as myself. I was kind of hoping the Communist stronghold would bring their best game and make a strong showing in sci-fi cinema with HARD TO BE A GOD.

But a capitalist-dog movie trade journal critic wrote a venomously negative review on the flick in the international marketplace. To best of my knowledge, the 1989 HARD TO BE A GOD, directed by a certain Peter Fleischman, never came to the West.

(Meanwhile, our free-market system sent all our jobs and economic strength to communist China, but that's another story, a horror story actually.)

A few science-fiction authorities claim that this HARD TO BE A GOD is really fun entertainment, in a space-swashbuckler kind of way (but it doesn't do justice to the book). I really don't know. Because all I've seen is, man oh man, Russian filmmaker Aleksei German's new, 2013 version of HTBAG. Which movie propaganda claims was a dream project, long in planning and 13 years in the making.

I don't doubt that every rouble is up there on screen, but...oh, to think what would have been the reaction if this nearly three-hour indulgence was what that grouchy western movie critic had seen back in 1989 instead. Probably would have killed the guy dead right there (a more perfect KGB assassination can scarcely be imagined).

Lensed in black-and-black - more accurately, a palette of ash-greys - German's film is like a total-immersion experience in medieval barbarism. The original storyline is almost completely obscured in a carefully choreographed nonstop parade of horror, brutality, filth, steam, slime, blood and snot (props to the portly actor to had to produce mucus from his nose on cue).

Once again, Don Rumata (Leonid Yermilkov) is the main character, an Earth scientist who, along with about two dozen compatriots similarly undercover as noblemen, is slowly losing his grip after being stuck too long on this crummy, backwards planet. Anyone with intellect ("wiseguys" and "bookworms" in subtitled dialogue) is being brutally killed, one drowned in a latrine for openers. Don Rumata is protected mainly by his rank (he is rumored to be literally the son of a regional god) and reputation as a master swordfighter. The movie completely avoids showing futuristic hardware or f/x of any kind, so whatever techno-wonders Rumata secretly has at his command can only be imagined.

A powerful royal security-minister, behind much of the bloodshed, gets evidence that Don Rumata is an imposter, but doesn't act on it...or did I miss something? I may be one of three or four people in all of Ohio who have read this book, and I couldn't even follow the non-plot. The mise-en-scene is just one impressively restless continuous-take sequence after another, dwelling on grimacing goons, torture, muck, armor, edged weapons and some of the best faux-feudal costumes this side of LORD OF THE RINGS (but there the similarities end). Dialogue is also opaque, very rarely filling in blanks. "The bees are killing their queen," smiles one creepy fellow, talking directly to the viewer.

To be fair, HARD TO BE A GOD doesn't resemble much anything else I've seen, except maybe E. Elias Merhige's experimental BEGOTTEN. Just a few minutes of it would illustrate the whole mindset of Dark Ages apocalypse Ingmar Bergman depicted in THE SEVENTH SEAL that the censorship wouldn't allow. But at three hours, it's just too much of a bad thing, despite the critics who have hailed it as a masterwork. Listen, you wiseguys, it's intellectuals like you who are why the art-houses closed down while PG-13 romantic comedies with Drew Barrymore filled the multiplexes.

And, worst of all, it's not the 1989 HARD TO BE A GOD that I wanted to see. Just as this isn't the life and career I had rather hoped to have by now.

And now the mixup has me wondering about that Republican National Convention that Cleveland is so looking forward to.

Are you sure it's the same Republicans you're thinking about? Saddam Hussein's forces were also known as Republicans. Maybe those are the folks who are coming to town in 2016.

I can imagine that mistake happening very easily. Just you wait, instead of the GOP we'll see ragged mullahs screaming verses from the Koran and shouting "Death to America! Death to Israel! Death to Jews!" as they lead marches down the spruced up Euclid Avenue, leaving IEDs on every streetcorner. And our liberal media and Cleveland Heights-Coventry intellectuals will see that and say, "Hey, I was wrong about these Republicans; they're an okay bunch after all."

Posted by Charles Cassady Jr. at 8:01 AM