Gett: The Trial of Viviane Amsalem (opens April 10th in Akron exclusively at the Nightlight Cinema)

[GETT: THE TRIAL OF VIVIANE AMSALEM opens in Akron on Friday April 10th exclusively at the Nightlight Cinema.] 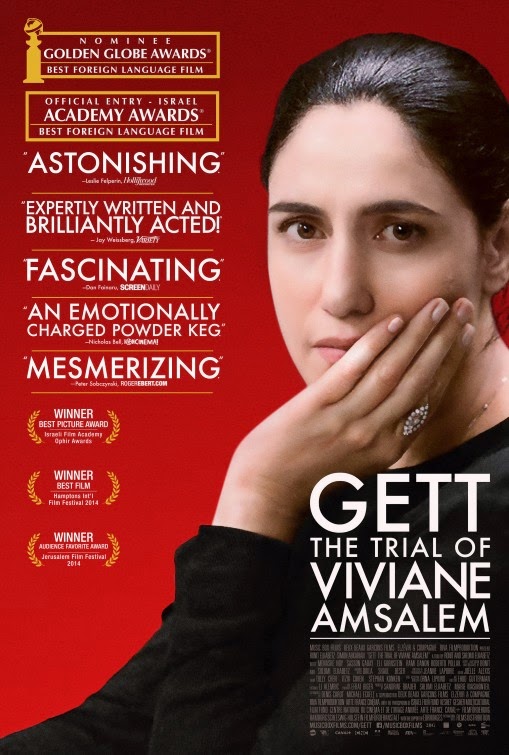 A recent article in Britian's Guardian profiled ultra-Orthodox Jews who have “defected” from their way of life, often sacrificing children and other family ties. “A growing number of men and women are breaking away from their insular lives,” the article stated, “because of a frustration with their gender-defined roles, the lack of access to wider education, or out of unhappiness with how serious issues, such as abuse or divorce, are handled by their leaders.”

The Israeli film GETT (known here as GETT: THE TRIAL OF VIVIANE AMSALEM) provides a vivid illustration of how strict religious laws fail to address the needs of modern people. In Israel, there is no civil divorce. A divorce (“get” in Biblical Hebrew) can only be granted with the husband's consent, unless there is evidence of physical abuse, infidelity, or lack of support. Without a “get,” a Jewish woman cannot remarry and is ostracized by the community.

The film centers on Viviane Amsalem (Ronit Elkabetz), who has been living apart from her husband, Elisha (Simon Abkarian), for four years, and for three of them has been applying for a divorce. This tense courtroom drama, written and directed by siblings Ronit and Shlomi Elkabetz, chronicles the frustrating, years-long process, in which Viviane's husband, Elisha, continually refuses to grant the divorce. “Never, Viviane,” he hisses at her as they sit on opposite sides facing a three-judge panel. The judges, constrained by religious law, urge Viviane to move back with her husband and try to work things out. “I'm not going back,” says Viviane. “We cannot live together. We are not compatible.”

The case drags on. Several times, Elisha fails to appear in court. Witnesses are brought in to testify about the Amsalems' marriage. Elisha's witnesses, including his brother, attest to his good character, his sonorous singing voice at the synagogue. At worst, he is said to be “stubborn,” but in all ways he's said to be a good husband who allowed his wife an unusual measure of freedom. A neighbor recounts hearing the couple argue and seeing Viviane throw dishes.

The testimony gets more absurd. Elisha's brother accuses Viviane's dedicated attorney, Carmel ben Tovim (Menashe Noy), of being in love with Viviane, and calls Viviane a “wayward woman.” Viviane's character becomes the central issue, even though she was a dutiful wife who, after four children and thirty years of marriage, was no longer in love with her husband (and, it is implied, may never have loved him). Falling out of love, or mere incompatibility, is a circumstance the traditional law is not equipped to handle. The convoluted reasoning of the judges and witnesses calls to mind the wry stories of Isaac Bashevis Singer.

The film is also reminiscent of the Iranian film A SEPARATION, in portraying a couple at the mercy of the strict religious laws of their country. Elisha, who is still in love with Viviane, tries to use the law to keep her tied to him, while Viviane, whose anguish eventually erupts in a profane tirade in the courtroom, struggles mightily to be free. It appears for a while that no resolution will be possible.

Ronit Elkabetz, the co-writer and director, is wonderfully expressive as Viviane,as frustration, rage, despair and hope flash subtly across her elegant, angular face. Simon Abkarian is convincing as the proud, implacable Elisha. The film is the third in the Elkabetz' trilogy, after TO TAKE A WIFE and 7 DAYS, which also explored aspects of traditional Israeli Jewish life. 4 out of 4 stars.