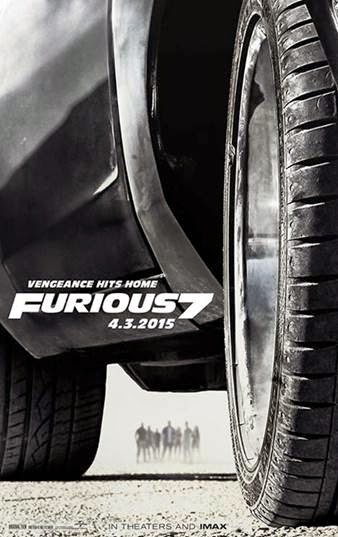 What can one say about FURIOUS 7? There's gallons of testosterone, plenty of talk about family, cool cars driving fast, hot babes in minimal clothing used as set decoration, bad ass ladies who are anything but mere set decoration (Michelle Rodriguez and Ronda Rousey) duking it out, ridiculous stunts actually being performed by real human beings in real danger instead of using CGI to fake it, Duane Johnson and Vin Diesel dropping one liners and bad guys with equal aplomb, and finally, a genuinely heartfelt and beautifully handled send-off for series star Paul Walker, who tragically died before the film was finished. It's big and loud and lots of fun. Looking for subtlety or subtext? Wrong movie, pal.

The FAST AND THE FURIOUS films are as formulaic as any action franchise going; they just happen to have a better formula. The secret ingredient is heart or soul. However you want to label it, despite being unabashedly commercial products, one gets the sense that the folks involved in these films both in front of and behind the cameras actually care about what they're doing, and that goes a long way. There's also considerable craft that goes into making the action sequences as spectacular and fun as possible. But as much as the films focus on vehicular mayhem, the cast members all get to shine, too.

Here's your obligatory plot synopsis: Deckard Shaw (Jason Statham), brother of the bad guy from the previous film, is out for revenge on our gang of anti-heroes. He kills Han (if you saw the end credits scene of the last film, you already knew this), puts Hobbs (Duane Johnson) in the hospital, and almost takes out Mia (Jordana Brewster) and her son. Well, Mia's husband Brian (Paul Walker) said he was getting bored with domestic life, anyway. After securing Mia and the kid in a safe house, group leader Dom (Vin Diesel) calls up the rest of the gang – Letty (Michelle Rodriguez), Tej (Ludacris), and Roman (Tyrese Gibson). Before they can go after Deckard, however, they have to complete a side mission for black ops agent Mr. Nobody (Kurt Russell) and bring down another bad guy, Jakande (Djimon Hounsou), and liberate both computer expert Ramsey (Nathalie Emmanuel) and the high tech surveillance program she's created. All of which is merely an excuse for over the top stunts and fight scenes, including a couple showdowns between Walker and martial arts bad-ass Tony Jaa.

As far as these films go, FURIOUS 7 is another solid entry that nonetheless falls a bit short of its predecessor (and, for my money, series high mark) FAST & FURIOUS 6. The main issue for me is that director James Wan (the SAW series) doesn't handle the action scenes as well as Justin Lin, helmer of entries 4 through 6. There's a bit more of the super fast editing that leads to confusion and detracts from ones full enjoyment of the elaborate stunts and fight choreography than in Lin's entries, and while it's not as bad as some offenders in this respect, it does hurt the film. Still, it's hard to imagine any fan of the series not enjoying this installment, or for that matter being unmoved by the ending. 3 out of 4 stars.
Posted by Bob Ignizio at 12:00 AM