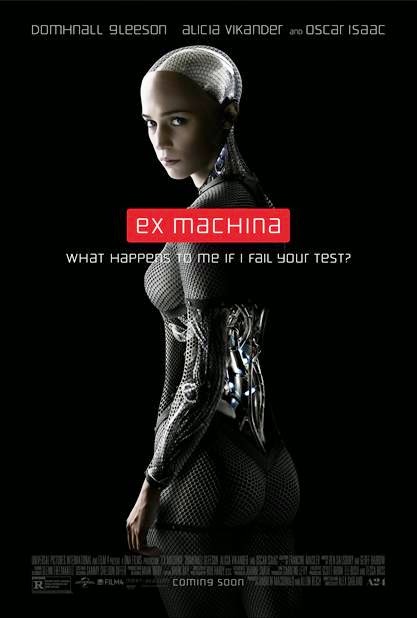 Not unlike Charlie Bucket, computer programmer Caleb (Domhnall Gleeson) wins a golden ticket in the science fiction thriller EX MACHINA. Only his ticket doesn't offer entree to a magical chocolate factory, but to the high tech secluded home of his employer Nathan (Oscar Isaac), CEO of the world's most popular search engine and a technological wizard.

Once at Nathan's home, and after signing an extensive non disclosure agreement, the literary comparisons switch from “Charlie and the Chocolate Factory” to “Frankenstein; or, the Modern Prometheus”. It turns out Nathan has applied his considerable intellect and expertise to the task of creating artificial intelligence. He just needs someone who has the ability to discern whether his creation, Ava (Alicia Vikander), possesses true consciousness.

Caleb will has a week to interact with Ava and reach his conclusion, but it doesn't take nearly that long for a connection to form between questioner and subject. But there's more than meets the eye going on, and soon Nathan starts to question who is really being observed, and whether his hero Nathan is really the cool, laid back genius he tries to present himself as, or a narcissistic, alcoholic with delusions of grandeur and a misogynistic streak. There's also some question as to whether Ava is really what she appears to be, not to mention Caleb himself. Tensions continue to grow as the week goes along, with the very real possibility of things coming to a violent head.

Written and directed by Alex Garland, EX MACHINA is about as fine an example of intelligent, thought provoking sci-fi as we've seen in recent years, on a par with the films of Duncan Jones (MOON, SOURCE CODE) and Shane Caruth (PRIMER, UPSTREAM COLOR). Of course Garland has already made some contributions to raising the bar for modern genre films as screenwriter for Danny Boyle's 28 DAYS LATER and SUNSHINE, and Mark Romanek's NEVER LET ME GO (He also wrote the quite enjoyable DREDD, but it would be a stretch to put that film in the same category), but this is his first time as a director.

Garland takes a decidedly minimalist approach, keeping the cast small and sticking mainly to one location (Nathan's eerily sterile high tech home, which looks like something out of a Kubrick film but is evidently a real hotel in Norway) and the contrastingly gorgeous natural world outside. Special effects are kept simple, too. Ava's robotic nature is realized in spectacular fashion, but once her appearance has its initial impact on us, it largely ceases to matter. Had Garland opted to depict Ava's artificial nature in an even simpler manner, it would hardly have mattered. This the the kind of sci-fi story that could just as easily work as a stage play, or have been adapted as an episode of “The Twilight Zone” during its original run.

There is a lot of food for thought in the film about the nature of what it means to be human, and the ways we dehumanize those we choose to see as different from ourselves. Certainly having the AI be female was no accident, either, as Garland uses it to explore ideas about gender, with both Nathan and Caleb displaying sexism in different ways: Nathan is a classic misogynist, while Caleb puts Ava up on a pedestal and sees her as needed to be rescued. And of course the film also deals with a number of modern and emerging technological issues; not just the very real possibility of an AI coming into existence, but issues of privacy and technological abuse, as well.

We've seen a lot of these ideas explored in other stories and films, of course, but Garlarnd handles them in a particularly deft fashion. He never lets his film's central themes sink too far into the background, but at the same time he's careful that his film remains compelling entertainment first and foremost. The ending may not thrill all viewers, given how the audience has invested in and empathized with Ava and Caleb, and how their story ultimately plays out. But to this writer, at least, it feels like the only way this story could have played out. 4 out of 4 stars.