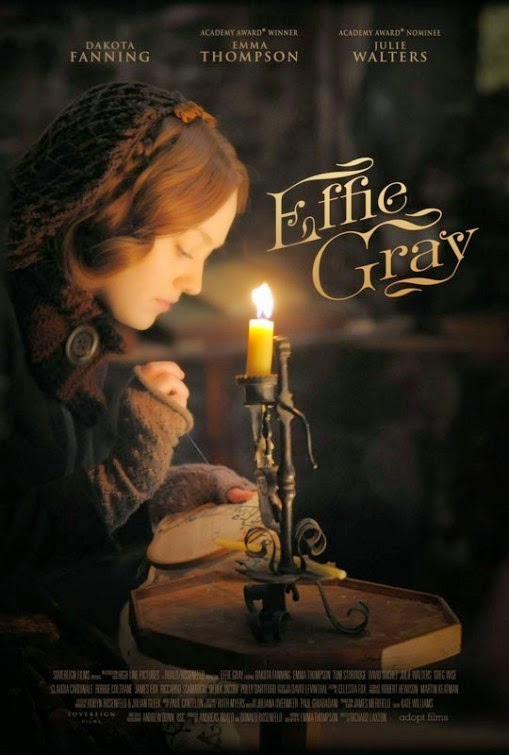 Since I AM SAM, in which she played the preternaturally mature daughter of a mentally retarded parent (Sean Penn), Dakota Fanning has been cast—sometimes romantically, sometimes not—opposite older men. There was Denzel Washington shielding her from harm in MAN ON FIRE, the backwoods rapist who violently stole her pre-pubescent virginity in HOUNDDOG, Boyd Holbrook in VERY GOOD GIRLS, and, most recently, Kevin Kline’s dissipated Errol Flynn opposite Fanning’s jail bait-y Beverly Aadland in THE LAST OF ROBIN HOOD.

In EFFIE GRAY, Fanning plays the child bride of Victorian-era British art critic John Ruskin (48-year-old Greg Wise), but there’s precious little about this union that’s romantic. When an accommodating Effie undresses for her husband on their wedding night, he runs from the room in abject horror. During the course of their six-year marriage, Ruskin never so much as touches his wife, let alone makes love to her.

Directed by BBC vet Richard Laxton and written by Emma Thompson (who plays a small role in the film), EFFIE GRAY makes an interesting companion piece to Mike Leigh’s recent J.M.W. Turner biopic, MR. TURNER. Ruskin, an ardent fan of Turner’s work, was a minor character in Leigh’s movie. Although Turner is referenced in Thompson’s script, he doesn’t make an onscreen appearance.

The differences in the two films are telling. GRAY has a fusty “Masterpiece Theater” taint; TURNER was visceral and supremely tactile, the very antithesis of standard “Great Artist” biopics. Art took center stage in TURNER while here it’s reduced to the occasional topic of drawing room conversation (“The purpose of art is to reveal the truth,” someone pretentiously opines). Both movies, however, are visually sumptuous. Andrew Dunn’s widescreen lensing may lack the pointillist luster of Dick Pope’s Oscar-nominated work for Leigh, yet this is still an exceptionally handsome film, one best appreciated on a big screen.

If the Ruskin of TURNER was a simpering mama’s boy played for laughs, Ruskin’s mommy (and daddy) fixation in GRAY has more profound consequences. Despite his standing as the preeminent art critic of his day, Wise’s uber-creepy Ruskin allows himself to be thoroughly dominated—and frequently humiliated—by his haughty, aristocratic parents (David Suchet and Julie Waters, both terrific). The casual humiliations Ruskin endures on a regular basis may or may not have been responsible for his sexual maladjustment, but it becomes the central theme of the movie.

At times, EFFIE GRAY almost has the feel of a Charlotte Bronte or Daphne du Maurier adaptation populated by real-life personages. (Ruskin could be unyielding stick in the mud Rochester; his mother an even more imperious, and vastly more terrifying, Mrs. Danvers.) It’s on this level that GRAY satisfies as an old-fashioned bodice-ripper, even though no ladies undergarments are actually torn during the course of the film.

When hunky Ruskin protege John Everett Millais (an appealing Tom Sturridge) is introduced, there’s some mild suspense as to whether Ruskin or his wife will make the first move since both seem equally infatuated with his lissome male beauty. Because Effie remains steadfast in her virtue, the only way she’ll entertain Millais’ reciprocal romantic interest is by first ending her marriage. A sympathetic lawyer (Derek Jacobi) is enlisted to help attain an annulment, not an easy task in 19th century Great Britain.

I’m not certain what attracted Thompson to the Rusk/Gray story (apparently it was a longtime passion project of hers). Perhaps she was intrigued by the female emancipation/empowerment angle (Effie is kith and kin to fairy tale heroines like Cinderella or Sleeping Beauty). Or maybe she just had an axe to grind with critics. Along with the New York Times harridan in BIRDMAN, the Ruskin of EFFIE GRAY is among the least sympathetic portrayals of a critic I’ve ever seen.

Fanning’s porcelain doll-like features are a perfect fit for the role, and she even manages to pull off a satisfactory English accent. It’s a lovely, at times deeply affecting performance. Wise, Thompson’s husband in real life, fares somewhat less well. His Ruskin remains pretty much a one-dimensional jerk from beginning to end. The plethora of familiar faces that regularly pop up—James Fox, Robbie Coltrane, Claudia Cardinale, et al—are less distracting than amusing. In fact, they lend a quaint “Tradition of Quality” imprimatur to the proceedings.

Speaking of which, this is precisely the type of cosseted British period piece that used to be catnip for arthouse habitués a quarter century ago. But today? I’m not even sure whether that (theatrical) audience exists anymore. I guess we’ll find out once the box-office receipts are counted. 2 1/2 out of 4 stars.
Posted by Milan Paurich at 12:00 AM