[DRAW HARD is available for rent or purchase as a digital download on VHX, and is available streaming on Fandor.] 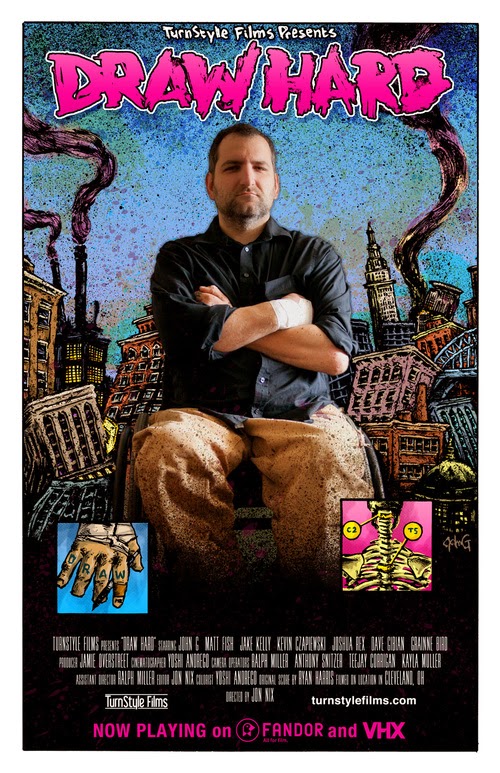 Over the years as a musician in Cleveland, I have seen the utterly unique and instantly recognizable artwork of John G on countless occasions throughout many music venues in this fair city. If you are familiar with Cleveland music at all, you know John G’s artwork. I never gave much thought to what might be the story of the man behind the art, but thankfully DRAW HARD documents the events that play out in John’s life; shedding light on his artistic process while at the same time celebrating his unlikely triumph over tragedy.

Upon initially meeting John, people in the Cleveland art community characterize him as being an intimidating bloke who is a tad grumpy and rough around the edges. But KISS freak (and purveyor of cheese) Matt Fish describes John as a goofball that is just plain bonkers. Fish, Earth’s undisputed king of colossal gourmet grilled cheese sandwiches, wisely hired John to create all of the ocular representations of the mouthwatering mammoth creations of his wildly successful Melt Bar & Grilled franchise. John’s visual concepts are clearly synonymous with (and at least partly responsible for) the insane popularity of Melt.  I am not a paid Melt spokesperson (although I gladly would be), but if you are a Clevelander that hasn't been to Melt Bar & Grilled, you need to dine there. If the wait is an hour, consider yourself lucky.

Underground luminaries of Cleveland’s diverse art and music scenes line up to sing the praises of John G’s accomplishments and the effects that his supreme brilliance and contributions have had on their lives. They are among those who John himself might describe as a rebel syndicate of champions of the underdog artisan. It’s not often that the infamous SPEAK IN TONGUES gets acknowledged in a documentary, but the mention here is certainly welcome amongst a host of Cleveland landmarks that are woven into the telling of a tale of an artist that devotedly embraces and displays (with fervor) the dingy, garbage-filled, rusty cityscapes of his depressing habitat.
This film surely hits home for me, evoking recollections of my father's pleas for my three brothers and I to "get off your lazy asses and do something worthwhile!" This is a motivational and inspirational short documentary made by a relatively new Cleveland production company (TurnStyle Films- founded in 2010) that concisely tells the story of a tremendously gifted Cleveland artist that has overcome monumental odds to make his mark and succeed in the world.  I look forward to seeing what TurnStyle Films has in the works.  My only complaint is that this film should be way, way longer than twenty minutes.  Otherwise, well done Jon Nix. 3 and 1/2 out of 4 stars.
Posted by Unknown at 12:00 AM