Corn's-a-Poppin' (April 3rd and 4th at the Cleveland Cinematheque) 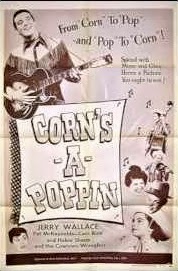 I generally dread the future nowadays, and what it will bring. Especially around here. But there is one thing to which I might look forward with sardonic amusement. You just KNOW this is going to happen: some up-and-coming moviemaker will gain an outsized reputation, like Orson Welles crossed with Quentin Tarentino crossed with Kevin Smith. Dude will be all over the media, have our whores of the news eating out of his hand, proclaiming everything he does a masterwork. But then...someone will do a little digging and find out his early, before-he-was famous online video postings still extant in hidden corners of the infosphere.

In fact, it's sort of happening now, belatedly, to the mercifully deceased Robert Altman (1925-2006). You internet kids probably don't know that name, but this director was a magisterial figure in the film world when I was taking a serious interest. He had a string of critical and commercial pearls in M*A*S*H, MCCABE AND MRS. MILLER and NASHVILLE that set him up in the 1970s as a world-brand name alongside Coppola, Spielberg, Scorsese and Bogdanovich. He see-sawed somewhat after that, from the bloated comic-book blockbuster (perhaps ahead of its time) POPEYE to the well-received Hollywood satire THE PLAYER. I even found interesting his few science-fiction genre works that other reviewers loathed, COUNTDOWN and QUINTET.

But now, several years after his death, comes the Final Statement of Robert Altman, in a cheeky revival of his frankly amateurish early screenwriting effort. The one nobody talked about, like the deformed relative in the attic, the 1956 CORN'S-A-POPPIN'.

Directed by a certain Robert Woodburn and shot in Altman's birthplace of Kansas City and allegedly funded by a popcorn business association, the roughly one-hour thing was lensed flatly and stageboundish, on what looks like about 2 1/2 indoor sets altogether. It's a cheapie C&W musical concerning a business called Pinwhistle Popcorn, and its feckless, vaguely Mr. Whipple-type tycoon Thaddeus Pinwhistle (Keith Painton), who sponsors of TV variety show to hype his brand. But a slippery partner has convinced Pinwhistle not only to change to a cheaper, unpoppable kernal formula but also books a girlfriend as a lousy star music act - all to sabotage the company and allow an unscrupulous competitor (whom the budget apparently didn't allocate the largesse to show) to take over the company.

The revue's announcer Johnny (Jerry Wallace) fronts an old-style C&W singing-cowboy country band on the side, and the show is a little more perkier (supposedly) whenever he takes off his "monkey suit" and plays twangy tunes. And he's got an equally musical, precocious, motherless daughter-niece-something (portrayed by "Little Cora Rice") who sees through the villain's schemes and saves the day. Several melodies of the type popularized by Cincinnati's retro country troupe Riders in the Sky are interspersed throughout.

It's all done with community-theater type mugging and that "wah-wah-wah-WAAHHHH" sound fx when one crestfallen character looks at the camera and slaps his hands to his cheeks. Yes, movies actually did that back in the old days. No wonder some feared that Communism would triumph.

Unless watched as a purely camp antique, like the lesser pictures Ed Wood was doing around the same era, there's really not much to celebrate about CORN'S-A-POPPIN', except for the fact that the Robert Altman filmic DNA is completely undetectable to the naked eye. And the curious fact that Altman's final film before his death was another comedy-musical with a live-broadcast premise, folk-country rhythms and much backstage business, the all-star adaptation of Garrison Keillor's A PRAIRIE HOME COMPANION. Not exactly a NASHVILLE, but a respectable entertainment, and a weird sort of bookend to CORN'S-A'POPPIN'. Maybe Altman felt he had to make restitution. (1 out of 4 stars)