[BEYOND THE REACH opens in Cleveland on Friday April 17th exclusively at Tower City Cinemas.] 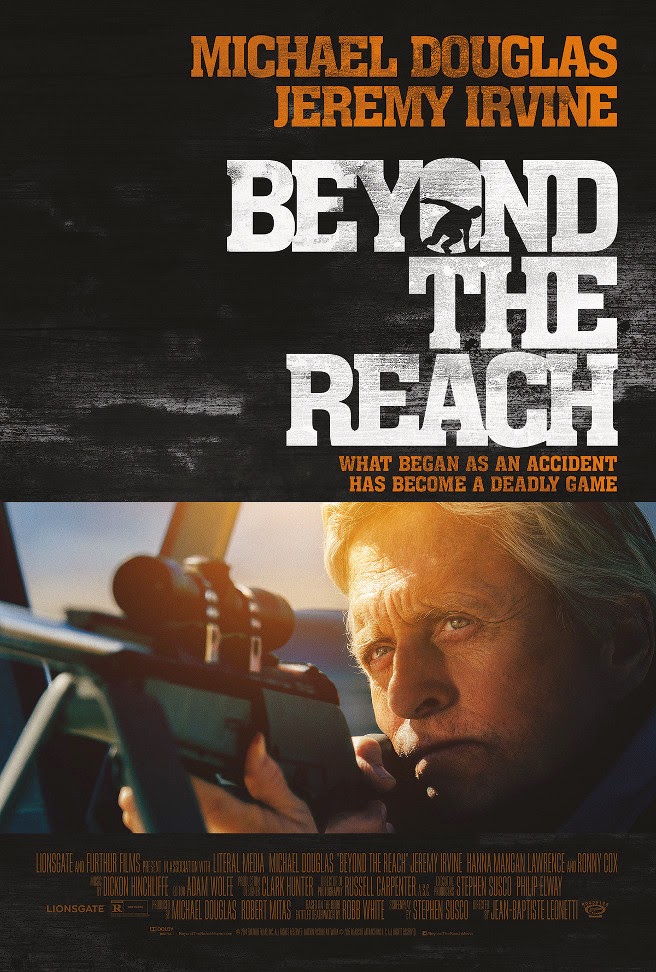 We know from the moment we see the way he's parked his Hummer across multiple spaces that John Madec, one of the two main characters in BEYOND THE REACH, is an asshole. The fact that he's from L.A. is offered up to further drive home the point, and if the audience still needed more convincing, he's played by Michael Douglas. Madec has stopped off in a small desert town with a special permit to hunt big horn sheep out of season, and has an extra fancy gun for just those purposes (again, asshole). But he needs a guide, and the best one available is a stoic young man named Ben (Jeremy Irvine) whose smart and sexy girlfriend (Hanna Mangan Lawrence) has just left town to attend college. Ben doesn't much care for Madec, but he can use the money and so agrees to take the gig.

After spending some time further establishing Madec's asshole cred and Ben's disdain for him, the two set out on the hunt. Madec is impatient for prey to appear, so rather than wait for his guide to confirm a target, he shoots at the first faraway moving object that crosses his line of fire. Turns out it's not a bighorn. Madec has shot and killed an old man, and the potential fallout from a manslaughter charge could really mess up his big business deal. So he tries to bribe Ben to help him cover up the death, but not before putting a bullet from Ben's gun in the body as well.

At first it looks like Ben will take the money in exchange for his silence. However, when an opportunity to grab Madec's sat phone and call in the incident presents itself, Ben tries to do the right thing. Sadly for Ben, Madec catches him in the act. Incensed that his guide would renege on a deal, Madec makes Ben strip down to his underwear and forces him at gunpoint to walk off into the desert. Madec figures he'll die from the elements in a relatively short time, but Ben's survival skills prove him wrong, forcing the wealthy villain to consider a more hands-on approach.

To be sure the characters are one-dimensional and the plot if full of implausible moments. Still, director Jean-Baptiste Léonetti manages to turn Steven Susco's script, adapted from Robb White's 1972 juvenile novel, into a reasonably gripping minimalist thriller for the first two thirds of its running time. Douglas is pretty much the go-to guy for these kind of evil rich white dude roles for a reason. Irvine says little and emotes even less, but he still manages to convey his character's basic decency and gets the audience on his side. No doubt his six pack abs will provide pleasant eye candy for some viewers, too.

Where it all goes wrong is in the final act, which is a major departure from the source material. The ending of White's novel, to be fair, was kind of hokey, but it at least felt true to the story and characters. The ending we get here is ham-fisted , cheesy, and just plain unsatisfying on every level. It's not like BEYOND THE REACH would have been a classic otherwise, but it certainly could have been a decent little B picture. Instead, it's frustrating and sad. 2 out of 4 stars.
Posted by Bob Ignizio at 12:17 AM