Approaching the Elephant (April 30th at the Akron Art Museum)

[APPROACHING THE ELEPHANT screens Thursday April 30th at 7:00 pm at the Akron Art Museum. Admission is free. The film is also available on Netflix Instant.] 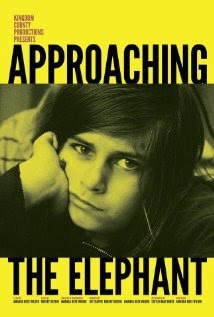 As public schools become increasingly rigid with concepts like the common core and multiple standardized tests, many parents are looking for alternatives. One particularly extreme alternative is the Teddy McArdle Free School of New Jersey. Imagine a school with no formal classes and no grades, where kids get to study what they want to study, when and how they want to study it, and also participate in how the schools are run, getting an equal vote with teachers and administrators on most issues. How the heck would that work?

Amanda Rose Wilder's documentary APPROACHING THE ELEPHANT takes a fly on the wall approach to showing how the free school philosophy plays out at Teddy McArdle, covering the school's first year of operation from start to finish. It's a bumpy ride, to say the least.

It's hard enough getting a group of kids used to this kind of autonomy while still educating them. Having a problematic student like Jiovani makes it even harder. Although the young boy claims to like his new school, he seems incapable of following even the lax rules that he and his class and teachers have agreed upon. In turn, this disrupts the educational process for the other students. Meetings are held to try and address the issue, but it's hard for these kids to do what needs to be done, eventually leading school founder Alex Khost to the point where he's ready to abandon the experiment altogether.

It's an interesting document of what, I have to imagine, was an amazingly stressful year for Khost and his students. Arguments, fights, and crying are almost nonstop, and the film gives the impression of barely contained chaos, as if things could break out into full-on “Lord of the Flies” mode at any moment. Although I get the sense that Wilder is trying to be impartial with regards to the school's merits or lack thereof, after watching this film I certainly wasn't sold on the free school approach.

The black and white cinematography seems a bit affected and doesn't really add anything to the proceedings, and one wishes Wilder had spent a little more time showing how the actual educational process at this kind of school works rather than spending almost all her film's running time on the conflicts with Jiovani. Nonetheless, it's a fascinating (and noisy) film that does a good job of capturing its subject, warts and all. 2 1/2 out of 4 stars.
Posted by Bob Ignizio at 12:00 AM