An interview with Michael Suglio, co-founder of The Short, Sweet Film Fest (April 10th through 12th at the Alex Theatre) 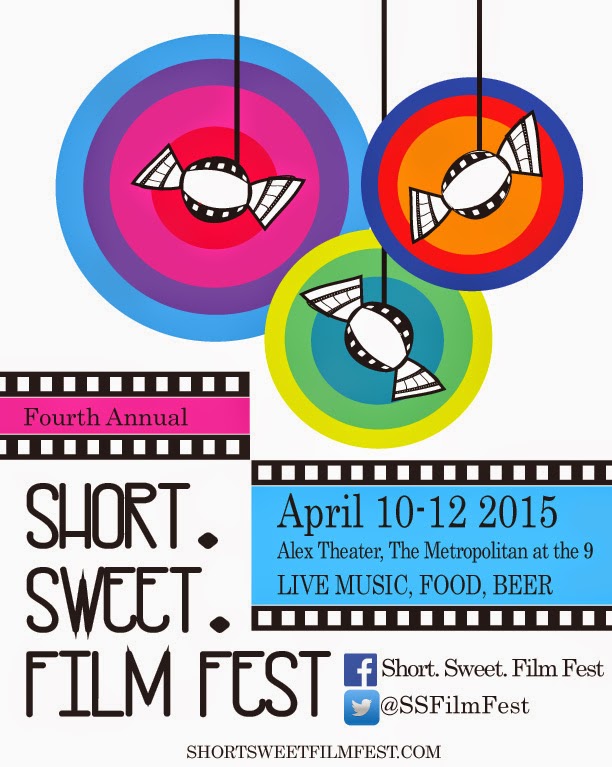 While there's nothing inherently wrong with a long movie, when even mindless popcorn flicks routinely clock in at two and a half or three hours, you could be forgiven for thinking that modern films have become a bit self indulgent. For the perfect antidote, there's Cleveland's Short, Sweet Film Fest, the 2015 edition of which is being held Friday April 10th through Sunday April 12th at the Alex Theatre on East 9th Street. I recently had a chance to chat with festival co-founder Michael Suglio to get the skinny on this event, and here's what I learned.

CLEVELAND MOVIE BLOG: First, I guess tell us a little bit about what the Short, Sweet Film Fest is exactly and how it got started.
MICHAEL SUGLIO: My co-founder, Alex Pavloff, and I were at a concert at Now That's Class and noticed that most of the audience was local musicians who were supporting local bands who were performing.  Alex and I were probably the only non-musicians in the audience.  Alex asked me if there was anything like that for filmmakers, because I produce short films, and I responded with a "no" so we decided to create a small festival which focuses on short films with an emphasis on local films.

CMB: Where did your submissions come from this year? Is this mostly Cleveland area filmmakers, or is it more wide ranging than that?
MS: Each year about 25-30% of our films are local.  I receive local films from word-of-mouth and from filmmakers who showed films previously and have a new film to show. The rest come from around the country and the world.  There is always at least one film from every continent (except Antarctica).  Many filmmakers submit their films to me via Withoutabox, but a lot of filmmakers find me through Google searches or old-fashioned word-of-mouth from other filmmakers, which is similar to the local level.

CMB: How many films total are in the fest, and what's the total running time if one were to stay for the whole thing?
MS: We are showing 64 different films and featuring 7 different bands. The schedule can be found here: http://shortsweetfilmfest.com/festival-schedule-2015/

CMB: People tend to think of films as these 90 minute or longer things that you see at the multiplex. How hard a sell is it to get an audience interested in these kind of short form movies? What do shorts offer that's different from a feature film?
MS: Most viewers/patrons find it refreshing to go to a shorts festival.  A lot of people comment on how it makes it easier to take breaks throughout the festival and also if a film is not something they are interested in they are not committed to it for 90 minutes.

What I like about shorts is it allows a to-the-point story without too much fluff.  Having a shorts festival allows for more filmmakers to showcase their work and of course more films than a festival which shows mainly features.  It adds a lot of variety with very little opportunity to get bored.

CMB: What's the range of subject matter like this year? Is there any kind of common theme you see running through the festival?
MS: In previous years there was a zombie theme or a post apocalypse theme but this year is definitely the year of "loss".  A lot of the films are about losing a loved one, losing memories, losing items...Kind of an odd theme, but now that you ask I realized this.

CMB: You're holding the fest at the new Alex theater, which I'm not familiar with. What can you tell us about the venue and why it was your choice for this year's fest?
MS: I had a wonderful first 3 years at Market Garden Brewery, but alas I outgrew the space (a good problem to have).  The Alex Theater is apart of the Metropolitan at the 9 hotel and apartments which is open to the public as is the Vault, Heinin's and the rest of the bars and restaurants.

The Alex Theater is a brand new space with an amazing digital screen and crisp surround sound audio.  I was very impressed with the space when I watched a film there. Like Market Garden, patrons will still be able to order food and drinks from staff who will quietly ask patrons if they want anything between films.

CMB: Any particular films you think people should really look out for in this year's fest? Any filmmakers that people might have heard of?
MS: Travis Pollert's team, Cleveland filmmakers, will be showing a total of 6 different short films throughout the festival.  “Hidden in Plain Sight” was just shown at the Cleveland International Film Festival and brings to attention Cleveland's lovely cultural gardens. Rob Underhill, whose film, “Wolf Call”, won the top award the first year of the festival, will be showing a total of 5 different films. “The Coin” is an excellent film about a boy and his guardian angel, played by Christopher Lloyd.  “Land of Enchantment” is an excellent sci-fi film with a big surprise at the end.