Cleveland hardcore bands like Confront, Outface, False Hope, Integrity, Gordon Solie Motherfuckers, Inmates, One Life Crew, and The H-100s may not be household names, but they mattered to the fans who saw their shows. One of those fans was Matthew Greenfield, director of the new documentary DESTROY CLEVELAND. The film essentially picks up where Brad Warner's documentary CLEVELAND'S SCREAMING! left off, circa 1987 and follows the scene through the early 2000s. DESTROY CLEVELAND is set to premiere in Cleveland on July 24 th at the Ohio City Masonic Arts Center, but in the meantime I had a chance to talk to Greenfield about his film and the music that inspired him.

CLEVELAND MOVIE BLOG: Tell us a little about yourself and your personal connection to the Cleveland music scene.
MATTHEW GREENFIELD: I have been into punk rock for most of my life. I always liked extreme things as a kid and teen; wrestling, punk, horror, it didn't matter. I wanted violence!  Grew up in Youngstown so Cleveland was always the closest city for me to catch good shows at.  It seemed like a giant bustling place compared to where I lived. Youngstown had a small hardcore scene but after awhile I needed more.

The first Cleveland show I saw was Gordon Solie Motherfuckers at Speak In Tongues. I had never seen a bloody, wild dude like Tony Erba. He was a gushing mess, reminding me more of Abdullah the Butcher than Ian Mackaye. Soon I was going to see every 9 Shocks Terror show that I could. That led to Cider and then I just went further and further down the rabbit hole.

CMB: There's already been a documentary on the hardcore scene in the U.S. as a whole, AMERICAN HARDCORE, and it pretty much acted like Cleveland didn't exist. Is your film a response to that, and why does the Cleveland hardcore scene warrant a documentary, in your opinion?
MG: No offense to those guys who made AMERICAN HARDCORE, but I don't think they have heard a single hardcore band after 1986. I liked the movie. It was cool that they mentioned Poison Idea but it wasn't a movie done by people that are in touch with do-it-yourself punk and hardcore.  I hate when movies like that are filled with old bitter men who claim that things suck now and that punk is dead. It's a tired story.

Of course they skipped Cleveland. Who doesn't? Cleveland is the under dog. Boston, DC, and all of these other places get to have their documentaries filled with Henry Rollins, Thurson Moore, and even Fred fuckin' Armisen. These are all extremely talented individuals but Cleveland doesn't give two shits about them. Their glitz and Hollywood appeal has nothing to do with Cleveland bands.

Cleveland is unique. It's not about politics, it's about doing what you want without the help of big labels, corporations,  giant venues, pr machines, or any of that stuff. Some people in the film are even pissed that there is now some attention coming their way from people who previously didn't care.  People in these Cleveland bands don't have aspirations to get rich or famous. It doesn't matter whether we are talking Integrity or H100s, it was always about honesty. 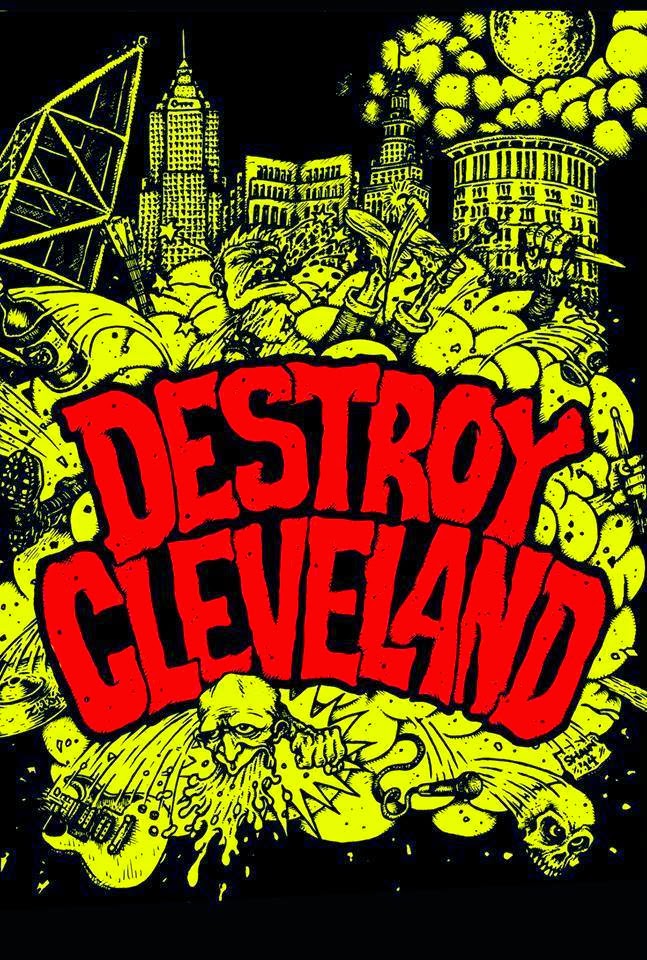 CMB: Your background is largely as a writer. What made you decide to do a film rather than, say, a book or a multi part post on your blog Rust Belt Hammer? Have you done any films prior to this, or did you sort of learn as you went?
MG: Writing always came natural to me. Putting my thoughts on paper is just something that always came easy. All I needed was a pen and paper. I love film though. Whether it's French New Wave or Troma, it all inspires me so much. This is my first one but certainly not the last. The story is very visual and a book couldn't do it justice unless it came after the movie.

CMB: How did you go about the process of deciding what bands to include, and what time period to cover?
MG: The story begins where [Brad Warner's documentary] CLEVELAND'S SCREAMING left off, pretty much. People can fuss and be babies about it all they want but I am featuring bands I like or found to have an impact. People can complain about One Life Crew, but OLC made people feel something, whether it was love or hate. Same with Inmates, Integrity, H100s, I could go on and on.  Some bands have been left out but nothing was done out of spite. We did our best.  If people don't like my movie, I certainly welcome them to make their own. Instead they will probably complain on the internet. The support has really been overwhelming, though. Glad I could give people something to look forward to.

CMB: Unlike today, you didn't have everybody in the audience filming every show with their cellphone during much of the time period you cover. How hard was it finding live footage of the bands, and was there anyone in particular who really helped in that regard?
MG: Tons of people taped the Cleveland Hardcore shows and the footage was surprisingly east to get. Some of it has been in people's basements for 25 years but they dusted it off and sent it our way. Tony Erba and Wedge were a great help.

CMB: On a similar note, the musicians you cover are for the most part not famous. On the one hand that probably makes them more approachable, but on the other it's not like you can just call up a record company PR person and set up an interview. Was it hard to track down everyone you wanted to interview, and was there anyone who just sort of slipped through the cracks?
MG: It was relatively easy to track everyone down. This has been a great team effort. Colby Grimes and Jorge Matthew Delarosa have a huge hand in this film. I will say this, I fucked up by not interviewing Blaze Tishko who was been in everything from OLC to Integrity and is an amazing guitarist. Chris Smith, Mean Steve, and a few others slipped through the cracks as well.

CMB: Where and when is the movie going to play? Is this just going to show in Cleveland, or is there enough interest elsewhere for screenings?
MG: The premier is in Cleveland on July 24th at the Ohio City Masonic Arts Center. The after party with Gordon Solie Motherfuckers is at The Foundry. Get the tickets while they last.  After Clevo, it will screen all over the country and even internationally. There has been a ton of unexpected interest. Thanks people!

CMB: Obviously you have the whole screening and promotional cycle to go through for DESTROY CLEVELAND, but have you thought about your plans after this? Is there another film you want to make that you're planning already?
MG: I want to do another movie. Maybe a sequel? Has anyone done a James Gang documentary? That could be a good one!

CMB: Anything else you want to comment on that I didn't mention?
MG: Check us out at facebook.com/destroyclevo and peep my website www.rustbelthammer.com.  Follow me on Twitter, Instagram, all that social media nonsense @mchomelesstwit or "Destroy Cleveland".
Posted by Bob Ignizio at 12:00 AM