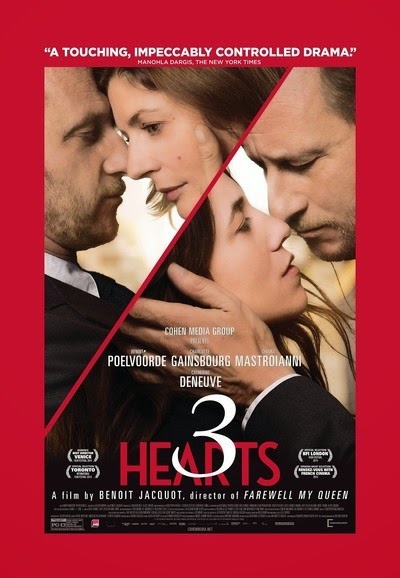 Nothing satisfies the heart and the head like a good French film. For me, there’s always been something deliciously comforting about sitting in the dark and listening to attractive, intelligent actors speak French. If you close your eyes, it’s like being transported to Gay Paree. And really, is there anything better than that?

French movies are invariably more grown-up and sophisticated than their American counterparts. Nobody makes a big deal about sex, smoking isn’t treated like a federal offense, and large quantities of wine (usually good French red wine) are invariably consumed without anyone dying of cirrhosis. Everything seems—and sounds—better in French.

On paper, 3 HEARTS seemed like it had the makings of a quintessentially Gallic thrill ride.

The director, Benoit Jacquot has made some terrific movies (FAREWELL, MY QUEEN, ADOLPHE, and A SINGLE GIRL, in particular), and the cast (Catherine Deneuve, Charlotte Gainsbourg, Chiara Mastroianni) is certainly to die for. Yet despite those portents of bliss, HEARTS left me feeling a tad lukewarm.

The plot is like something out of a 1930’s dime store novel. Unbeknownst to each other, sisters Sylvie and Sophie (Gainsbourg and Mastroianni) both fall in love with the same man (Benoit Poelvoorde’s Marc) at different points in their lives. Because Sylvie is already married when she meets tax inspector Marc, she chooses not to answer the pitter-patter of her heart. (Moving with her husband to Minneapolis insures that the affair won’t go any farther.) But, after a reasonable amount of time has passed, antiques dealer Sophie allows herself to be swept off her feet by Marc and they soon marry. Poor Sophie, of course, has no idea of her husband’s previous relationship with Sylvie (whom he still loves). The major suspense lies in waiting for the other shoe to drop.

There’s a conspicuous—and fatal—lack of heat between the three leads despite the fact that they’re all playing amour-stricken characters. Instead, we merely see some very good actors, well, acting without ever truly inhabiting their roles. We have to take on faith all of their intense feelings since it isn’t visible onscreen.

The only performer who seems to exist under the skin of her character is Deneuve as Sylvie and Sophie’s mom. Of course, Deneuve has become such a veritable force of nature at this point in her career that there probably isn’t any other way for her to essay a role except by literally inhaling it. As always, she’s a joy to watch.

Which doesn’t mean that 3 HEARTS isn’t enjoyable on a strictly surface level. (Hey, it’s French!) Unfortunately, Jacquot’s formalistic, intellectualized approach to genre prevents it from ever becoming the transportive wallow I’m pretty sure he must have intended. At least I think so. Otherwise, why bother directing (and co-writing) a film so clearly in the Douglas Sirk-ian wheelhouse. Sirk famously used distancing tropes—mirrors, an emphasis on interior design, frequent long shots, etc.—to detach himself from the melodramatic excess swirling around him, but he never lost sight of the story or his characters. That’s why audiences responded to them—truly, madly, deeply— the way they did back in the 1950’s. Nothing about 3 HEARTS could engender that same type of emotional (hyper emotional?) response today. And our post-post-modern culture has nothing to do with it. 2 ½ out of 4 stars.