Welcome to the Space Show (now on video) 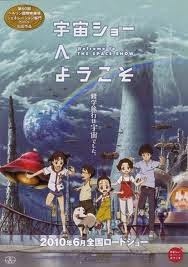 I don't know about you, but when a separate Oscar category for Best Animated Feature was inaugurated, I welcomed it as a chance to open audiences up to the rich world of cartoons, CGI and stop-motion that exists outside of the usual Disney/DreamWorks axis of evil. (Plus, I like to think that advancements in animation will mean fewer live-action cinema - meaning fewer borderline-psycho actors would be employed in our midst - and that can't be a bad thing). So, perhaps thanks to the Academy, more viewers are turned on to stuff like SONG OF THE SEA and the output of Studio Ghibli than would have been otherwise.

Still, there are still some major animated features that take some time to get here. I'm still curious about FELIDAE, the German cartoon based on a best-selling thriller novel (that never broke big with American readers) about a cat version of Sherlock Holmes...

Wait a minute! Didn't I just write this same exact lead for a previous review? Well, yes. I've got two movies in a row in which it's applicable. Plus this is a bad economy, it's cold and dark, it's dispiriting in Cleveland, and I just couldn't up with anything more original. What are you going to do, garnish my Cleveland Movie Blog wages? Good luck.

Okay, so what's the other world-class animation that has just come out on home video (somewhat belatedly in the English-speaking world) and is worth the time of any adventurous viewers? It's Hayao Miyazaki's LAPUTA - CASTLE IN THE SKY... No, no it isn't. I just had a review of that already on this site and thought I could save time and trouble by reposting. It is a really bad economy.

But this review's subject is indeed another feature hailing from the animation studios of the fiendish Pearl Harbor marauders, the Japanese. This one is director Koji Masunari's WELCOME TO THE SPACE SHOW.

Even by lofty standards of anime, Masunari (a seasoned television Japanimation auteur, who here made his theatrical bow in 2010) fills the screen with wondrous, odd and splendid images, plus a script that was an original concoction, not adapted from pre-existing comics. Pity, though; the script is kind of the weak link in the whole construct. Maybe some clever manga writers might have punched it up more.

Five children in the countryside for summer vacation find a genuine crop circle. And, among the altered foliage, an injured alien, who looks exactly like a dog (a terrier variety, I'd guess) but talks, walks, and can fight in cool self-generated battle armor.

The creature - naturally named Pochi - is a space botanist protecting an ancient, rare Earth plant from smugglers, the reason he got wounded in the first place. He rewards the children by taking them aboard a UFO/taxi to the incredible alien colony and ocean that thrives unseen on the far side of the moon.

But a sudden Earth quarantine - and the machinations of the persistent smugglers - push Pochi and the kids even deeper into space, ultimately to a gigantic pirate-broadcast circus/performance festival called the Space Show, where awaits an evil mastermind behind the whole thing. And he's an old comrade of Pochi's, from some kind of operation to rescue endangered species throughout the cosmos that went wrong made him into a super-villain. Or...something like that. Maybe a bunch of manga writers actually were consulted on this. That's the sort of thing they tend to come up with, over 27 interminable volumes.

But the visuals are the point here. Masunari, along with a one-named illustration-designer of evidently some renown called Okama, came up with about 100 distinct and whimsical alien species. They are doodle-like but with echoes of Gahan Wilson and Ralph Bakshi at their most uninhibited (and, occasionally, rather Freudian).

Masunari also cast young voiceover actors age-correct for the child characters, uncommon in anime, although this little virtue is lost if you go with the English-language dub default.

Sure, WELCOME TO THE SPACE SHOW isn't what I would call an anime masterwork, and some of the impact is lost on the average small screen. But dig a fun "extra", 90 bubbly minutes of a Japanese TV talk-show (co-hosted, I am guessing, by a popular Nippon swimsuit/lingerie model), the episode devoting to hyping the movie. There are guest appearances by Masunari, Okama and other participants for lengthy Q&As, alien-drawing contests and fan mail. It's either terrific or terrible, depending on one's tolerance for Japanese kitsch-media, but in context makes one feel like the feature was worth the trouble checking out. (3 out of 4 stars)