[THE WRECKING CREW opens in Cleveland on Friday March 20th exclusively at the Cedar Lee Theatre.] 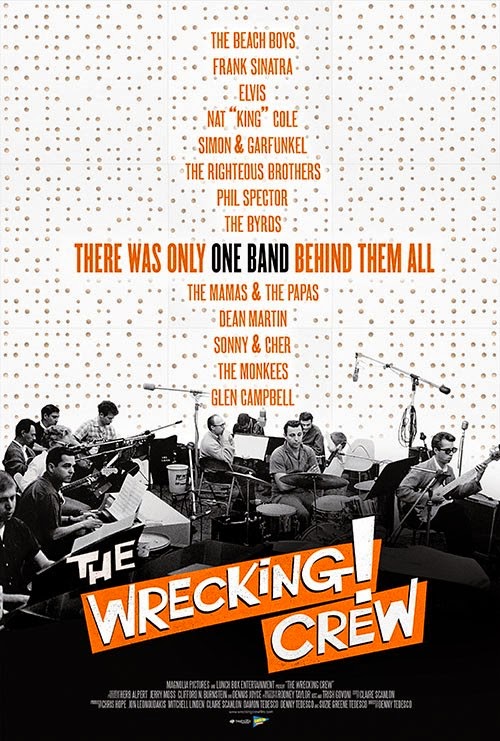 Coming of age in the '60s meant a lot of disillusionment. Cigarettes, it turned out, weren't good for you. Leaders weren't murdered by lone gunmen. Nobody attacked our ship in the Gulf of Tonkin. A president, despite his denials, was a crook. And, your favorite bands did not play on their own records.


Anyone over the age of nine knew that the Monkees, the made-for-television group, didn't play the instruments they mimed on TV, but what about the Byrds, a group revered for its musicianship? Wasn't Dennis Wilson banging the drums on the Beach Boys' “Good Vibrations”? What about the Association, Jan and Dean, the Mamas and Papas, Simon and Garfunkel and Herb Alpert's Tijuana Brass?

The truth is complicated, and has more to do with the record business in the '60s than with the bands. Time is money, and producers, rather than herding the squabbling, less experienced band members, would hire the top studio session players, who not only could play the music brilliantly, but could also improvise and arrange, adding that catchy bass line, for instance, that would ensure a hit song. (Think of “Windy” and “The Beat Goes On.”) The practice harmonized with the music business' migration from New York to L.A., the land of swaying palm trees and illusion.

The top players, an anonymous crew of about 20 versatile virtuosos, became known latterly as the Wrecking Crew, supposedly because it was said their rock-and-roll playing would “wreck” the music industry. The group included some future solo stars: guitarist Glen Campbell, who played on “everything,” and keyboardist Leon Russell, who says playing on demos earned him $10 a song, which meant “I got to eat that day.” The talented session players are the focus of THE WRECKING CREW a marvelously entertaining documentary by Denny Tedesco. The film was completed in 2008 but delayed from general release because of record companies' exorbitant fee demands for the song excerpts.

Tedesco is the son of the late guitarist Tommy Tedesco, and the film is in part a tribute to his father, a humble, affable fellow shown in home movies giving funny musical talks about his session-playing days. Tedesco, known as the “King of L.A. guitar soloists,” had a long career even after the Wrecking Crew days, playing music for innumerable TV shows and films. His son's film features illuminating interviews with the musicians (many who have since died), producers and recording artists. Like Dorothy's Toto, it pulls back the curtain on the cynical machinery behind popular music. It is a companion piece to the documentaries STANDING IN THE SHADOWS OF MOTOWN,  about the Motown house band the Funk Brothers, and 20 FEET FROM STARDOM, about backup singers.

No one should be surprised that singing groups like Sonny & Cher, the Righteous Brothers or the Fifth Dimension were backed by studio musicians on their records, but with rock bands, there was sometimes wounded pride. Cheery Micky Dolenz, an actor before being recruited for the Monkees, always recognized that the group was a TV act, but Peter Tork, a musician, was disillusioned when he showed up at a recording session with his guitar and was told to sit in the corner. He was naïve then, Tork admits, adding that now he would do exactly what those producers did. (The Monkees did eventually learn to play their own live dates.) The Beach Boys were a chimera that might be better described as “The Brian Wilson Project.” Wilson relished working with the Wrecking Crew players, who could execute his visionary arrangements. When he was just Jim, the Byrds' Roger McGuinn was a session player, and he loved playing with the facile Wrecking Crew on the Byrds albums. That's Glen Campbell, by the way, playing the distinctive solo on “Mr. Tambourine Man.”

The film profiles the individual Wrecking Crew musicians, many of whom are on hand to reminisce. There is Carole Kaye, the ensemble's only woman,who is one of America's most talented, prolific and least known bassists. She started out as a bebop jazz musician and contributed her genius to scores of records by the Beach Boys, Frank Sinatra, Joe Cocker, Barbra Streisand, Ray Charles, Frank Zappa and many more. Think of her when you hear her distinctive bass line on “Wichita Lineman,” a song she says “meant a lot to me.”

Saxophonist Plas Johnson, a New Orleans-based jazz player, was recruited by Capitol Records in the mid-'50s after backing B.B. King and Johnny Otis, and played on countless records and movie soundtracks (that's him on the “Pink Panther Theme” and “The Odd Couple”). Guitarist Bill Pitman, now 95, a session man discovered and brought into rock and roll by Phil Spector. Pitman is known for the distinctive ukulele on “Raindrops Keep Fallin' on My Head” as well as his work on numerous rock albums, TV shows and movies. Drummer Earl Palmer, an influential New Orleans jazz musician with a low regard for rock and roll, backed Fats Domino, Little Richard and other NOLA artists before joining the Wrecking Crew, playing and recording nonstop during the ensemble's heyday and going on to work continuously in film and TV. (Palmer died in 2008.).

Life on the Wrecking Crew had its  benefits, including steady work and high pay; Carole Kaye recalls that at one time, “I was making more money than the president of the United States.” But the nonstop session work also wreaked havoc on family life, leading to divorces and children rarely seen. Then there was the record companies' cupidity. A great many instrumental albums of the Wrecking Crews' music were released, bearing the names of fictional groups like The Marketts. The session musicians received no liner credit, and the album jackets featured photos of clean-cut young men purported to be the artists.

The revelations of studio legerdemain might be surprising, but the essence of the hit song is the song -- the gorgeous lyrics of the Byrds' Gene Clark, Jimmy Webb's transcendental poetry, Brian Wilson's aching yearnings for eternal summer. The studio polish just enhanced their expression. Many of the bands of the era were accomplished players -- just not up to the one-take perfection producers demanded.

The early '70s were more artist-driven, and such fakery was no longer acceptable. Musicians began bringing their own sidemen to recording sessions. Carole King, for example, hired James Taylor to play guitar. The golden decade of the Wrecking Crew came to a close. “It was never meant to last, this magical bubble,” songwriter Jimmy Webb says wistfully. 4 out of 4 stars.