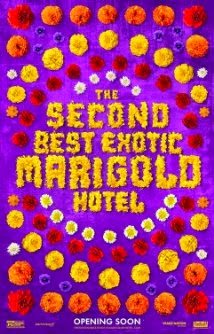 More than three years have passed since the release of THE BEST EXOTIC MARIGOLD HOTEL, a sunny trifle and surprise hit that spent many months pleasing older audiences at independent theaters like Cleveland's Cedar Lee. The movie, based on a novel by British author Deborah Moggach called These Foolish Things, told of a group of British seniors who, displaced by the overburdened National Health System, took up residence in a once grand, now rather ramshackle retirement hotel in Jaipur, India. Under the tutelage of the eager hotelier Sonny Kapoor (SLUMDOG MILLIONAIRE star Dev Patel), the spry residents entangle romantically, find new careers, and experience rejuvenation within the teeming, colorful, disheveled culture of Jaipur, India.

Now comes a sequel, THE SECOND BEST EXOTIC MARIGOLD HOTEL, which finds the same elders a few years on, dealing with romantic and career problems. The sequel is the work of the same writer-director team of Ol Parker and John Madden.

Sonny, still charmingly awkward, is now engaged to beautiful Sunaina (Tina Desai), who's busily planning their wedding. Sonny is hoping to buy a second hotel to expand his business, and toward that end travels with crusty grande dame Muriel (Maggie Smith), now the hotel's co-manager, to San Diego to seek investment capital from a retirement hotel chain called Evergreen. Amid predictable complaints by Muriel about the sorry state of American tea (“a cup of tepid nonsense!”) and the U.S in general (“It made death more tempting”), Sonny and Muriel make a convincing case for the hotel's expansion. (Muriel has softened considerably since the first film, in which she was a full-throated bigot, dismissing native Indians for their “brown faces and black hearts” and  for “reeking of curry.”)

Sonny has other worries, including a rival for Sunaina's affections: her brother's long-haired friend Kushal (Shazad Latif). Via Skype, Sonny witnesses Kushal rehearsing with Sunaina the sexy, Bollywood-style dance Sonny is slated to perform with her at their wedding. Further, Kushal is scheming to push his way into Sonny's hotel business.

Every morning, Sonny takes roll call of his elderly residents, just in case someone has perished in the night. But to its credit, MARIGOLD 2 is a film about old people that isn't chiefly about illness and death. These seniors are vital, not unrealistically so, and still eagerly planning for the future in their work and romantic lives. The character played by Judi Dench, Evelyn (pronounced “Eve-lyn,” like the male writer Evelyn Waugh), has proved so successful as a textiles buyer that she's offered a promotion. The fact that Evelyn is so dynamic at 79 offers hope to every viewer fearing the limits of old age.

Evelyn's new job requires her to travel, and she wonders how that will affect her tentative relationship with the diffident Douglas (Bill Nighy), who's found work as a charming but not very competent tour guide. Evelyn and Douglas' gentle pas de deux is reminiscent of the one at the center of Dench's 1990s BBC romantic sitcom “As Time Goes By.” Are they or aren't they a couple? The question becomes more complicated with the unexpected arrival of Douglas' estranged wife (who left him in the first film), demanding a divorce.

Norman (Ronald Pickup), the horny roué of the first film, is now partnered with the attractive Carol (Diana Hardcastle), though he still believes himself “rather catnip to the ladies” whom he believes he is charming at the expats' club. He makes a wistful comment to an Indian taxi driver about longing for his single days, which brings about a Strangers on a Train scenario, wherein Norman comes to believe his eager-to-please driver is trying to kill Carol. Even if she's not in mortal danger, Norman wonders about Carol's fidelity, what with her long lunches and late nights at the office.

Madge (Celia Imrie), who in the first movie came to India in search of romance, finds herself torn between two wealthy suitors, only to be presented with an unexpected third alternative.

The sequel introduces two new characters, Americans – or more accurately one American (Richard Gere) and one Englishwoman (Tasmin Greig) pretending to be an American pretending to be British (stay with me, now). Gere plays Guy, an author seeking a quiet room at the Marigold. He is instantly, and somewhat inexplicably, enchanted by Sonny's bossy widowed mother, Mrs. Kapur (Lilette Dubey), whom he imagines to be the muse of his next novel. Greig plays Lavinia, a guest Sonny thoughtlessly ignores in favor of Guy, because he thinks Guy is a hotel reviewer from the Evergreen company. (It seems the company promised to send “a guy.”) Fawlty Towers fans will find this plot quite familiar (“Hotel Inspectors.”) Gere, though a fine actor, seems as out of place in this scenario as Kobe beef at a Hindu restaurant.

The film suffers from some weaknesses One is its reliance on tired tropes, such as the “Cyrano” plot that has Douglas employing an Indian boy to relay information for his guided tours via remote earpiece -- with predictable results. And then there's the big, silly Bollywood wedding that serves as the movie's climax. Also, unlike the first MARIGOLD, the sequel spends little time exploring cultural differences, or the irony of British people re-colonizing the lost jewel in their empire's crown.

The stories aren't strong, but they matter less than the film's tone and texture, the lovely colors and scenery, and the mix of venerable actors and actresses doing their thing. The waspish exchanges between Judi Dench and Maggie Smith (Smith: “I'm older and wiser”; Dench: ”Yes, nineteen days older!”) are alone worth the ticket price. 3 out of 4 stars.
Posted by Pamela Zoslov at 12:13 AM