[THE SALVATION opens in Cleveland on Friday March 13th exclusively at the Capitol Theatre.] 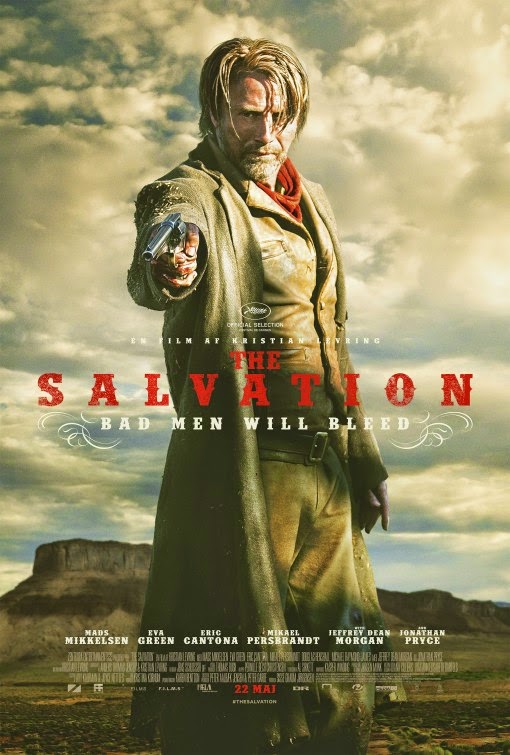 Jon (Mads Mikkelsen) and his brother Peter (Mikael Persbrandt) are two former Danish soldiers trying to make a new life in America's wild west in THE SALVATION. After 7 years of hard work getting his homestead ready, Jon is finally about to welcome his wife and 10 year old son to his new home. Tragically, the reunion is short lived as Jon's family is killed by two recently released criminals. He hunts them down and kills them in revenge, but that's nowhere near the end of things.

It turns out that one of the criminals was the brother of Delarue (Jeffrey Dean Morgan), a gang leader working for an oil company to buy up land in the town near where Jon and Peter live. Since the local sheriff/preacher (Douglas Henshall) hasn't caught the man who killed his brother, Delarue kills a few of the townspeople and raises his rate for “protection” money, promising he won't rest until he has vengeance. The feelings of the dead brother's mute widow (Eva Green) are less clear, at least at first. Of course it all leads to a great deal of murder, torture, and rape to the tune of a Morricone-esque soundtrack.

There really is nothing new here, but director/co-writer Kristian Levring does it well and with an obvious affection for the genre. Plus he's got Mikkelsen as his lead. Anybody who can take on the role of a pop cultural icon like Hannibal Lecter as Mads has on TVs “Hannibal” and make viewers say, “Anthony who?” is an actor to be reckoned with, and he proves that once again here. Just as good here is Jeffrey Morgan playing an utterly loathsome villain who you can't wait to see get his. Eva Green plays yet another sexual object who vacillates between victim and femme fatale, but unlike her similar roles in SIN CITY, WHITE BIRD IN A BLIZZARD, or 300: RISE OF AN EMPIRE doesn't make much of an impression here. Not her fault, really; the character is barely written.

Still, I love a good Spaghetti Western, even if it's a Danish production shot in Johannesburg, South Africa. No, THE SALVATION is not on the level of Sergio Leone's masterpieces like A FISTFUL OF DOLLARS or ONCE UPON A TIME IN AMERICA. It's more like the countless knock-offs and rip-offs that flooded grindhouses in the wake of DOLLARS' success, only more polished and with a better cast. It's not exactly worth shouting about it from the rooftops, but if you're a fan of the genre it'll most likely satisfy. 2 ½ out of 4 stars.
Posted by Bob Ignizio at 12:00 AM