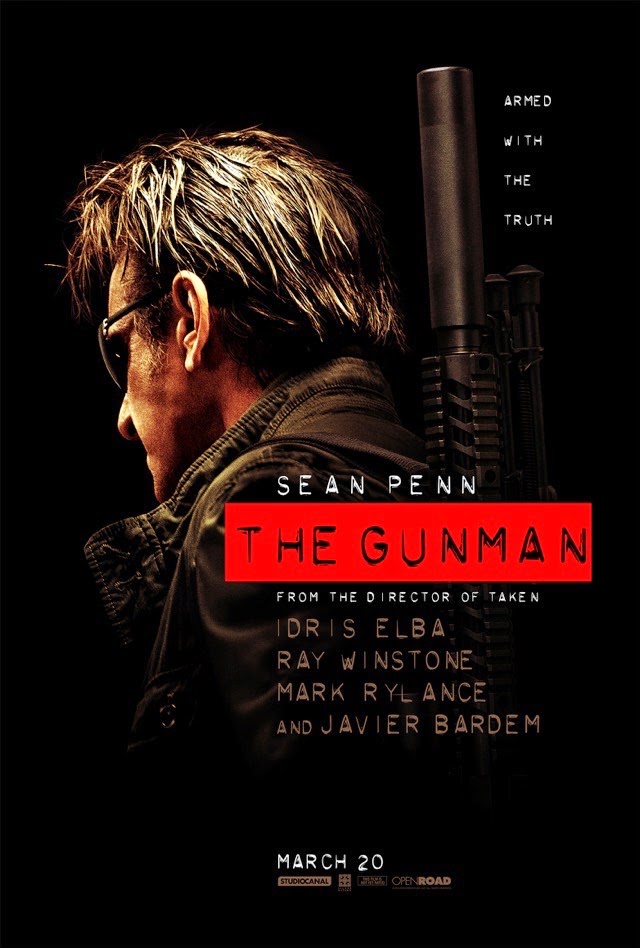 Sean Penn plays an ex-military contractor trying to atone for his violent past in THE GUNMAN. The film begins in 2006 with Jim "Twink" Terrier (Penn) stationed in the Democratic Republic of Congo where he's assigned to guard workers for NGOs. One of the workers is an attractive doctor named Annie (Jasmine Trinca) who winds up involved with Terrier while his co-worker Felix (Javier Bardem) looks on with a jealousy verging on outright creepiness.

Terrier and Felix aren't just bodyguards, though. They do the dirty work for various corporate interests on the side under the direction of Cox (Mark Rylance). After one such job, the assassination of the Congolese mining minister, Terrier is forced to flee the DRC without even being able to say goodbye to Annie, trusting in Felix to look after her. Terrier pulls off the hit, but the repercussions for the country go far beyond the death of one man.

Years later Terrier is back in the DRC doing humanitarian work to assuage his conscience when a group of armed men show up and try to kill him. Realizing that someone has put a hit out on him, Terrier goes on the run with the help of another old ex-mercenary named Stan (Ray Winstone). After first checking in with Cox, Terrier heads to Spain to see what Felix, now married to Annie, knows about the men trying to kill him.

As you'd expect, the romance between Annie and Terrier gets rekindled just in time for the bad guys to show up and start shooting holes in Felix' lovely estate, sending the star crossed lovers on the run. Equally expected is the identity of the man who wants Terrier dead, which you'll figure out long before he does.

I can't say THE GUNMAN is a bad film; there's just nothing that lifts it above the routine. Directed by Pierre Morel, it looks good, has some decent performances, and delivers plenty of well staged if unexceptional action scenes. The subtext about how big corporations help feed the violence in the DRC so they can more easily exploit its natural resources adds some interest to the film, but we're a long way from VIRUNGA (last year's Oscar nominated documentary on the DRC) here. For what it is, though, THE GUNMAN is... okay. Hard to recommend anyone race out to see it in theaters, but if you like the stars and/or just feel like taking in an action movie that's a little more grounded and a little more intelligent than the usual modern Hollywood fare, this might do the trick. 2 ½ out of 4 stars.